The first papal visit of Pope Francis to South Korea from August 14 to 18 is very meaningful and special not only for many Catholics but also Korean celebrities who are doing whatever they can to make this special occassion unforgettable.

Veteran singer Noh Young Shim composed a song titled “Koinonia” (what means camaraderie and comunion in Greek) while director Cha Eun Taek gathered many famous faces for a music video, including such big names as actors Kim Woo Bin, Wang Ji Hye, Kim Tae Hee, Kim Ha Neul, singer Bada, and many more. Actor Ahn Sung Ki who helped organizing this special project said, “When I called everyone they were extremely happy to be part of the music video, and those who could not make it were extremely regretful.” Profits generated from the music video will be used to help the poor and those in need in accordance with Pope Francis’ wish. It was also revealed that CJ E&M will donate all their profits from this song to various charities.

K-Pop Princess, BoA, who is a devoted Catholic, was given a special honor to meet Pope Francis at the Daejeon Catholic University where she was one of the spokespersons for the Asia Youth Day. Before rushing off to the SMTOWN concert in Seoul, she had a lunch with the special guest and 20 other representatives. 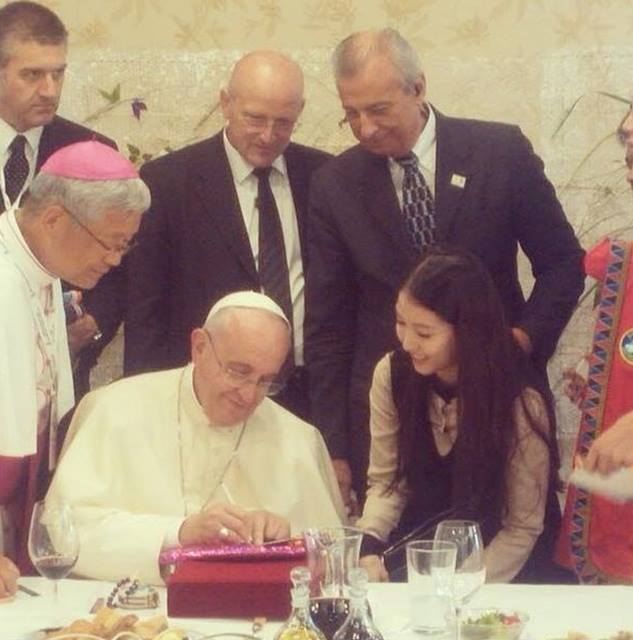 The number of Catholics in Korea continues to grow every year, with the recent news about singer Rain being baptised in July. Media outlets reported that he made this decision inspired by his girlfriend Kim Tae Hee and that the couple are preparing for marriage. Cube Entertainment has quickly put an end to this rumors, stating, “Rain has indeed been baptized, but this is something he has been meaning to do for some time now. It would be rash to make assumptions about engagement plans.”