MFBTY gave fans a treat when they uploaded the BuckuBucku music video as an album teaser for the fans. The song and music video did not disappoint and it played host to a whole selection of some of Korean music’s most talented artists that are set to feature on the groups upcoming album. The new album titled Wonderland is set to drop on March 19th and will have a have 16 tracks, including one featuring Tiger JK and Yoon Mi Rae son Jordan.

The third single off the album Hello Happy will feature none other then Yoo Hee Yeol (KBS Sketch Book) , in short this is shaping up to be one of the best album of 2015. 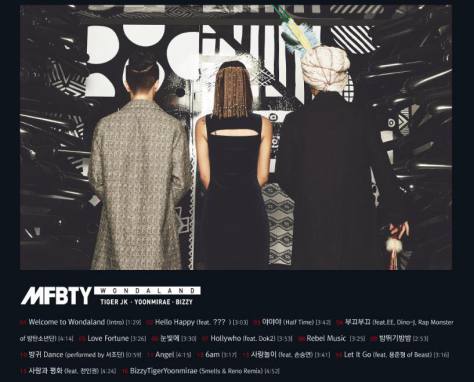 One of the most surprising  and promising collaborations on the album is BTS‘s Rap Monster appearance on not 1 but 3 separate tracks on the upcoming album. I think it is safe to say the young rapper / producer left quite the impression on the dynamic trio.

If you have not yet make sure you check out ‘BuckuBucku’.

Be sure to stay with Officially KMusic for all the latest in Korean music and news.