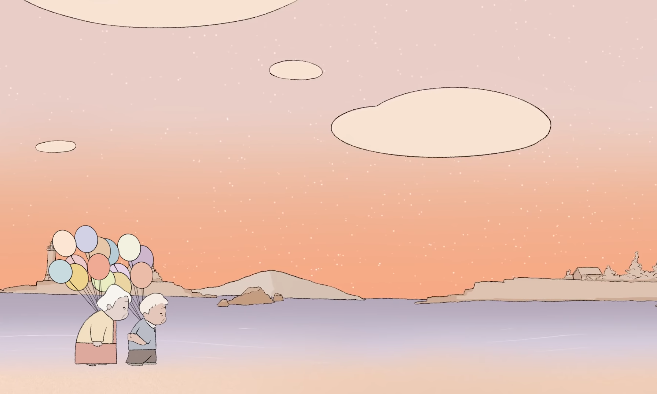 On July 24th, N FLYING released an MV for their special digital single, ‘Starlight’. Check it out down below!

The track is written by the group’s leader, Seunghyub and was inspired upon his own grandfather’s passing and the effect it had on his grandmother. The guitar sounds in the track and comforting, and with the strong emotional vocals from the group, the song feels like a sound track to a movie.

This feeling is assisted with the MV being an animated film. We see an elderly man and woman walking together on the beach, connected to balloons. As we see them reminiscence about their memories, the man becomes younger and starts losing his balloons. These balloons could represent the memories of his life. Upon seeing the elderly woman cry, he draws her face on one of his remaining balloons and gives it to her, cheering her up. Over time, we see the man become even younger (now a child), walking further away from the lady and losing more balloons till 1 remains. Before walking off, he turns around to going back to the woman, smiling whilst holding the balloon which he drew. They share a heartfelt hug before his last balloon floats away and he disappears. On the way back, walking along the shoreline, she starts losing her balloons before leaving only one he drew. She then calmly sits, alone, on a bedrock looking over the ocean into the night.

How did you feel about N FLYING‘s track and MV? Let us know in the comments down below!

Scroll for more
Tap
SOMI asks ‘What You Waiting For’ in new comeback MV!
ATEEZ’s ‘ZERO: FEVER PART 1’ is finally here along with new MV for ‘INCEPTION’!
Scroll