NU’EST W are preparing to give their fans yet another sweet surprise!

It has been announced that NU’EST W will hold a special surprise stage during the August 17 episode of ‘M!Countdown‘!

The four member subunit will perform both their latest single ‘If You‘ and NU’EST‘s 2013 hit ‘Hello‘. ‘If You‘ was originally intended to be released without any accompanying promotions but the enthusiasm of the group’s fans saw the track place first on numerous music charts. These fans also lead a resurgence of interest in ‘Hello‘, resulting in the four-year-old song ranking highly on a number of charts. Due to such an outpouring of love and support for the group, NU’EST W have decided to show their appreciation for their fanbase through this special stage.

In addition to being thankful for the amount of support they have received, the members of NU’EST W have also shown their appreciation for the donations their fans have made to support ‘comfort women’; a group of women who were forced into sexual slavery by the occupying Japanese forces during World War II. NU’EST fans bought bracelets similar to that worn by member Ren in order to raise money for these women. The fans raised over ₩6.3 million, or around $5500US! 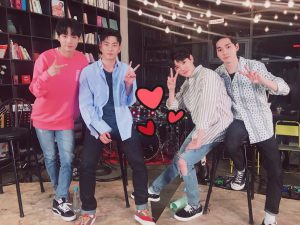 NU’EST W is a subunit comprised of all of the original NU’EST members, excluding Minhyun who is currently promoting as a member of Wanna One. It seems that both NU’EST W and their fans feel as if they have a lot to be grateful for!

Follow Officially Kmusic to keep up to date with the latest KPop news!