On July 17th 2016, SBS unveiled recent behind the scenes still cuts of Actress Park Shin Hye smiling about on the set of “Doctors.”

The cuts were taken from the scenes where Yoo Hye Jeong (played by Park Shin Hye) showed how well she can handle her liquor at a company dinner to when she and Hong Ji Hong (played by Kim Rae Won) showed off their chemistry during their secret date. 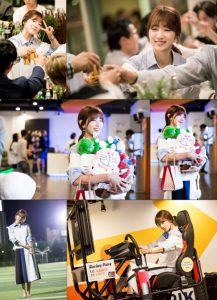 Park Shin Hye‘s character on “Doctors” is far different from all the other roles that she had played in her other dramas. The actress is deemed as the mood maker on set where she generates a lively and happy working setting for everyone.

The team of “Doctors” says, “When Park Shin Hye and Kim Rae Won are being focused, all the cast and staff members are crowding together and happily filming. Park Shin Hye has to do the most filming among all the other actors and actresses; despite the exhaustion, she still inspires her fellow co-stars and staffs to work hard and cheers all of us on.”

Let us know what you thought about Park Shin Hye‘s character on “Doctors” in comparison to all the other characters she has played before in the comments below.