SHINHWA drop lyrics for ‘Kiss Me Like That!’ – Oh My!

SHINHWA drop lyrics for ‘Kiss Me Like That!’ – Oh My!

SHINHWA has revealed the lyrics for their upcoming title track ‘Kiss Me Like That’ from the special album release ‘Heart’ .

The special album ‘Heart‘ is part of their ‘All Your 2018‘ 20th anniversary project which will continue through the remainder of 2018.  The album ‘Heart‘ is scheduled for release on August 28 and will be followed by a concert (also called ‘Heart‘) in Seoul on October 6 and 7.

The song ‘Kiss Me Like That‘ was composed by Caesar & Loui with lyrics by Kim Eana.  The song reportedly combines the sounds of an acoustic guitar, electronic drum and synths to create a modern dance track.  If the lyrics are anything to go by, we are going to be breathless when we listen to this one!

Check out SHINHWA’s lyrics for ‘Kiss Me Like That’ 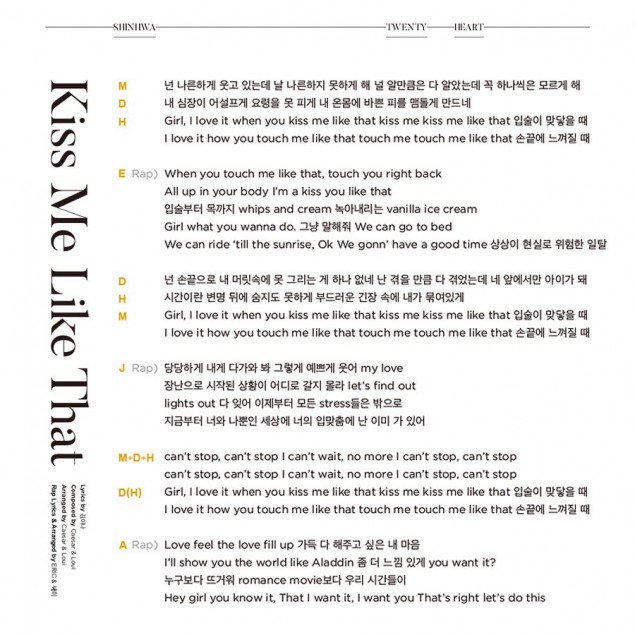 Other songs on the album will include ‘In The Air‘ which will feature Yoon Mi Rae, ‘Level’, ‘Here I Come’, ‘L.U.V‘, and ‘Don’t Leave Me‘ which was composed by MosPick and PENTAGON‘s Hui.

SHINHWA‘s special album ‘HEART‘, and the title track ‘Kiss Me Like That‘ are  scheduled for release on August 28 at 6PM KST.

Are you excited for SHINHWA‘s comeback?  What do you think of the concept image and MV teaser?  Let us know your thoughts in the comments below.

Scroll for more
Tap
100% is bringing ‘Sunshine’ to you this September!
BTS are raw, powerful, and entirely self-aware beneath a riotous kaleidoscope of colour in ‘IDOL’
Scroll
Loading Comments...