On January 23rd, the first teasers were released for the collaboration single between EPIK HIGH’s Tablo, Eric Nam, and Gallant titled, ‘Cave Me In.’ Fans first got wind about a collaborative single in the works when the group had previously gotten together for a photo shoot for W Korea. Since then, the 3 artists dropped a short teaser video of the latest track which was shot in Hong Kong.

Check out the teaser video from Gallant’s Instagram below:

In addition to the teaser video, the release schedule was revealed. And since this upcoming single is a global release, the song will drop on January 26th and 27th. 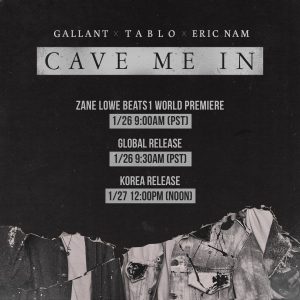 What are your thoughts on this upcoming collaboration? Let us know in the comments below!