TaeHyun Releases The Tracklist For Winner’s New Album ‘EXIT:E’ On His Instagram

TaeHyun Releases The Tracklist For Winner’s New Album ‘EXIT:E’ On His Instagram

Having already released their entry single ‘사랑가시 (Pricked)’ on January 11, Winner is getting ready for their first comeback since debut. Earlier tonight, TaeHyun uploaded the track list onto his Instagram getting Inner Circles hyped for their first mini album ‘EXIT:E’ as part of the ‘EXIT Movement’, following YG Entertainment’s upload of the same image on their YG Life website. 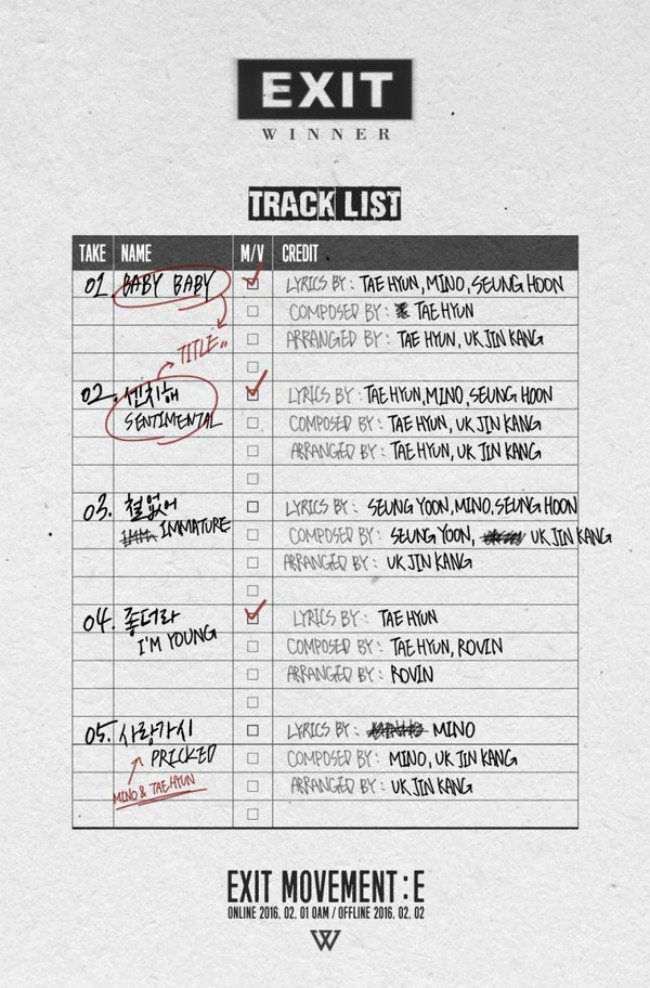 As you can see, TaeHyun, Mino, and SeungHoon had a big role in writing this album as all three men are credited with three tracks, including the entry single created by Mino.  Meanwhile SeungYoon assisted in one track and JinWoo seems to have just left his work to his vocal cords.

Set for a February 1 release date, ‘EXIT:E’ is the second date  for the ‘EXIT Movement’. According to images there is still three more dates in 2016 that need to be revealed.

According to what one YG representative told OSEN, “WINNER, who has swept the rookie awards last year, have been on a break for more than a year. As such, we are doing everything we can to make their comeback special. In the run up to WINNER’s comeback on February 1, we are going to launch a special two-week promotion campaign. The campaign is Yang HyunSuk’s idea so we have high hopes.”

It has also been reported that there will be three music videos released for this new album, being the first time YG has dropped so many music videos, at once, for a group of theirs. YG decided they would not release a video nor promote for Winner’s entry single, it will be interesting to see what songs they do pair with a video. TaeHyun and YG’s CEO, Yang HyunSuk, both released a clip of TaeHyun from ‘Baby Baby’, raising the anticipation for the comeback even more.

Looking at the track list and that new clip, I cannot wait for this new album to drop especially since Winner hasn’t been able to come back until now. It seems that YG is pulling out all the stops for these five men and I think it’s about time. Are you even more excited about Winner’s comeback? Tell us what you are anticipating the most!