Taeyeon has showcased the full tracklist for her upcoming album, ‘My Voice‘. This album will feature thirteen tracks, including the title track, ‘Fine‘. Check out the list below! 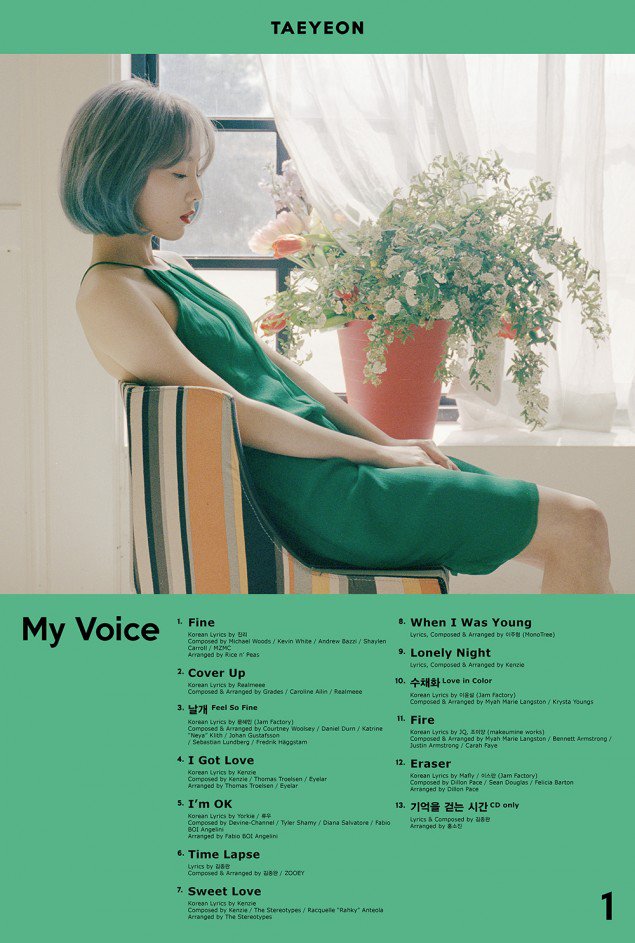 ‘My Voice’ also features tracks like ‘Cover Up‘, ‘Feel So Fine‘, ‘I Got Love‘, ‘I’m Ok‘, ‘Time Lapse‘, ‘Sweet Love‘, ‘When I Was Young‘, ‘Lonely Night‘, ‘Love In Colour‘, ‘Fire‘, ‘Eraser,‘ and ‘Time To Walk Through Memories‘. ‘Time To Walk Through Memories’ is an exclusive track that will only be featured in the CD. She has also pre-released one of the tracks, ‘I Got Love’, which showcased her amazing voice. On top of that, ‘Fine’ is said to be an alternative pop song with intense melody.

She has also released three highlight clips for her tracks: ‘Love In Colour’, ‘Cover Up’ and ‘Feel So Fine’. Check them out below!

The beautiful piano notes can be heard distinctively, where her voice shines through. Even though it was a short clip, she definitely showed how beautiful her voice is, touching many people’s hearts with her vocals. She will surely slay people with its full release!

In this highlight clip, ‘Cover Up’ is a much more upbeat track that one can not help but smile to. Also, Taeyeon just looked too adorable and stunning as she smiles to the camera. She also looked like she had fun filming this short segment.

Taeyeon’s first full album ‘My Voice’ will be released on the 28th of February, so stay tuned for more updates on her comeback! Did any of the highlight clips capture your attention? Let us know in the comments below!