As reported earlier, actor Park Shi Hoo was accused for sexual harassment by a 22-year-old trainee. However, text messages exchanged between rookie actor “K” and victim “A”, which were revealed to the public, sheds new light on the case.

A: I’m home
K: Are you feeling okay?
A: I can’t sober up…
K: Well you didn’t make any mistakes
A: Whatever, as long as I had fun, it’s fine
K: Let’s go clubbing later
A: Sigh kk you said you’re going to Club Ellui, right?

Sources close to actor “K” stated: “He doesn’t know what to do since this is such a shocking thing to happen so it came to this,” and “On the night of the incident, he received a text from another woman. The texts show that she and ‘K’ are very close.”

“Since ‘K’ lives on the outskirts of Seoul, his home from Cheongdamdong is pretty far. Since he didn’t have a car and public transportation was cut off, he just crashed at Park Shi Hoo’s home. So he’s so bewildered that this sort of thing happened. We will be handing over the full conversation between ‘K’ and ‘A’ to the police.”

Additionally to the messages, their Kakao Talk‘s statuses were revealed. “K” wrote: “Fine, let’s go till the end and see” while “A” posted: “A wise one knows how to be humble when the enemy strikes. An eye for an eye may be the right way but it will make others think of me as the same level as the enemy and it will not earn the hearts of those around me.” 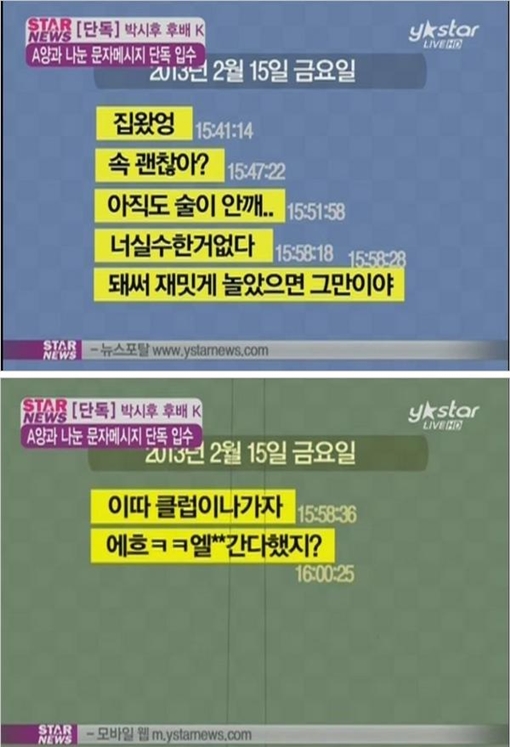 Scroll for more
Tap
Ken of VIXX Dresses Up as G-Dragon
NU’EST Reveals their “Hello” Choreography to the Fans
Scroll
Loading Comments...