K-EXCLUSIVE: VIXX greet their Aussie Starlights at their first ever Sydney concert!

K-EXCLUSIVE: VIXX greet their Aussie Starlights at their first ever Sydney concert!

It’s only the beginning! The VIXX boys kicked off their first ever Australia tour last night, starting off in Sydney at the iconic Luna Park Big Top! Member Ravi visited back in July for the Rapbeat show, but this was the first time that all six members have greeted Aussie Starlights!

Even though it was the their first time in Australia, the entire group was nothing less than impressive from the beginning to the end of their concert. The energy and passion of the crowd spurred them on and in return VIXX displayed their joy and enthusiasm on stage for the audience.  It was symbiosis of VIXX with Starlights, making it a truly magical evening. 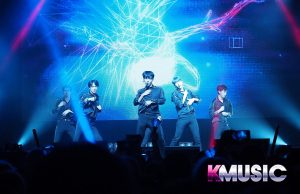 The intro video sent the crowd into a frenzy, as the reality suddenly dawned on all of us. VIXX are going to be on stage any moment now!

Members N, Ravi, Hongbin, Ken, Leo and Hyuk kicked off the night with their mystical track ‘Fantasy‘. Dressed sleekly in all black, the boys looked like fallen angels as they performed. After coming to terms with the fact the boys were actually right in front of them, the fans soon got into the fan chants. With little to no break, the boys got the fans a little bit “Desperate“, with their energetic track by the same name.

A little breathless from the two vibrant performances, the boys gave their greetings. From cutie boy Ken to the very calm and collected Leo, the members greeted fans one by one. Leader N got starlights‘s hearts fluttering, telling us “that seeing all of you here, is what makes me really think that this, is our Shangri-La“. With that the boys continued on for the night. 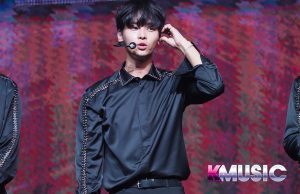 Next up was “Love Me Do“, an electric EDM inspired track. It was quickly followed up by their much loved track, “Chained Up“. Equiped with air blowing torches, which really added to the lyrics, ‘freeze, armour down’! Fans were really nailing the fan chants at this point, almost matching the boys in volume. At this point in time, you could really feel the room heat up with the fans love!

This brought us to the first talking segment of the night. Because the boys have been busy with their own individual activities, they took this time to share with Aussie fans what they’ve each been up to. It was a bit of a show and tell situation, where the boys had prepared photos of their activities as they told the fans what had been going on for them.

We kicked off with Leo who proudly showed off a selfie he took with his fellow musical co-stars. Leo will be playing the Crowned Prince Rudolph in his latest musical “The Last Kiss“. Fans also spotted EXO‘s Suho in the selfie, as Leo will be sharing the role with him. Next up was Ken, who showed a handsome winking selfie, a trademark of Ken selfies. Ken is currently starring in the “Titanic” musical, having just finished a show before boarding his plane to Sydney. Leader N has been in a Korean-Japanese musical called “Interview“. He showed off a handsome selfie taken with his script and a co-star. Who coincidentally has also worked with Leo and Ken previously in other musical projects. Fans then chanted for the boys to each sing a little from their musicals. As each member sang, you could see starlights glowing from the crowd.

Ravi was up next, sharing two images with the fans. Firstly he shared he’s been studying a lot about makeup and beauty trends as he’s the host of a beauty show titled ‘Style Follow‘. He also teased fans showing off his latest SoundCloud track, stating that a mix-tape is definitely in the making. Hongbin showed off his sweet dimples in selfies on set of his newest drama. While the youngest Hyuk, revealed images of himself with cuts and bruises across his face. But rest assured, it’s only for filming and not in real life. 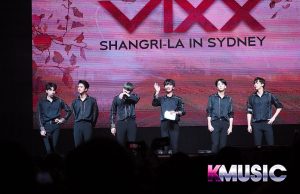 The boys finished off their first talking segment asking Aussie starlights to support each member in their own schedules. But also to support VIXX as a whole.

Finished with the talking, the VIXX boys slowed down the next set, serenading the fans with “Romance Is Over“. They then closed off the first half of the concert with “Now We.”

Ducking back stage for a quick wardrobe change, the fans were treated to a video of the boys. Close up shots of each members showed them in the MV sets for many of their title songs. Fans screamed eagerly for each member, waiting patiently for their return.

Jumping back on stage in reflective red shirts, VIXX bought out their trusty fans for “Shangri-La“. Enchanting the fans with their elegant dance moves and smooth vocals. It was quickly followed by “Black Out” from the same album. VIXX just kept giving to the fans, and the fans loved every second of it.

This led us into the second talking segment of the night and probably the fans favourite segment, Q&A. VIXX members selected questions asked by fans before the concert started. There were lots of good questions making it hard for each member to choose one.

Some memorable ones included HongBin asking Leo to hop like a kangaroo. Which Leo did after much deliberation. HongBin was then asked to do the cutest aegyo, blessing the fans with two cute poses. Leo and Ravi told fans of two interesting encounters they’d had so far in Sydney. Fans laughed and played along as each member talked eagerly. It was also during this segment that members shared their favourite places around Sydney. Leader N naming the Harbour Bridge as one while Ravi chose Bondi Beach.

Concluding the second talking segments, the boys gifted starlights with their slow RnB track “Goodnight and Good morning“. Slow dancing with their microphone stands, VIXX showed off their sexier side. Sticking with mood, VIXX performed their groovy track “Hot Enough“. 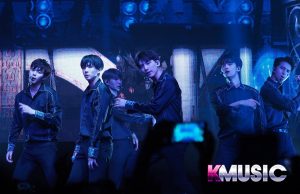 After spicing up the stage Hyuk, ‘the ending fairy’ told fans the one piece of news we all hated the most, the night is coming to an end. Each member expressed their excitement for being in Sydney finally. They thanked the fans, N stating ‘if it wasn’t for you (our fans), we would not be here’. Youngest member Hyuk, finished off the speeches by asking fans to look into his eyes, and then in perfect English, he delivered the following:

“Even if you are far away, but always you guys are in my heart” – Hyuk

Of course they wouldn’t leave the fans without performing a few more songs. They performed “Light Up The Darkness” from their first mini album “Hyde“. Fans wished the concert would never end as the boys finished off with a bang, performing track “On and On“.

But is it really over? Fans chanted V-I-X-X over and over as the light dimmed. Will the boys come back?

Of course no K-pop concert is complete without a crazy encore! Wearing new shirts with their stage names printed on them, VIXX got up close with their starlights in “Love Equation“. Sending finger hearts to all the fans in the crowd. Of course they didn’t forget their fans sitting up at the back, sending their love from the front of the stage all the way to the back of the Big Top. Keeping the love going, VIXX sang to their angels, in track “Heaven“. With sweet soothing lyrics like ‘Jump over the sky, and come and fly with me‘. If only all the Aussie Starlights could do that. 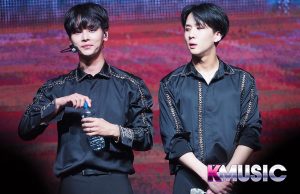 And just like that the crazy night between Starlights and VIXX came to an end. VIXX unplugged themselves in final song “Error” as they thanked fans and made their way off of the stage for the last time. It was a crazy fun night, packed full of awesome performances from VIXX and hilarious interactions with the fans. The boys promised to come back with an even better album next time. But until then, Aussie Starlights will have to carry around with them the memories from this amazing concert.