Wanna One have revealed their official merchandise for repackaged mini album ‘1-1=0 (Nothing Without You)’!

Members of Wanna One‘s fan cafe were the first to see the new merchandise, with the group sharing the news in a post at 12AM KST on December 10. Amongst a wide variety of official products, Wanna One also finally revealed the design of their lightstick, which you can see below! 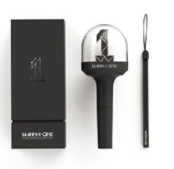 Wanna One‘s official lightstick boasts a slick black design, encasing the group’s logo in a clear plastic bulb. The lightstick comes with a wrist strap to make sure Wannables don’t drop it whilst cheering along to their favourite Wanna One tracks, as well as a sophisticated protective box.

The lightstick design was revealed as part of an announcement about both Wanna One‘s official merchandise and special merchandise for the group’s first fan meeting titled ‘2017 Premier Fan Con‘ in a few days’ time. Take a look at all the merchandise available for purchase below!

Will you be trying to get your hands on any of Wanna One‘s new merch?

Scroll for more
Tap
YG confirms that iKON and BLACKPINK’s comeback is scheduled for 2018!
Super Junior are getting ready for ‘Super Show 7’
Scroll
Loading Comments...