“The Admiral: Roaring Currents” to be Shown in 9 Additional US Theaters

“The Admiral: Roaring Currents” to be Shown in 9 Additional US Theaters

“The Admiral: Roaring Currents,” a Korean historical movie, has been doing extremely well, not just in Korea, but in the States also. In fact, it is the most successful Korean movie the states has yet seen. Following the enormous success, CJ Entertainment announced that the movie will be displayed in nine additional screens in the US.

“The Admiral: Roaring Currents” has already taken the title of the most popular Korean movie in the States from “Spring, Summer, Fall, Winter…and Spring” that was displayed in 160 theaters. Additionally, “The Admiral:Roaring Current” surpassed 2 million USD over labor day weekend. 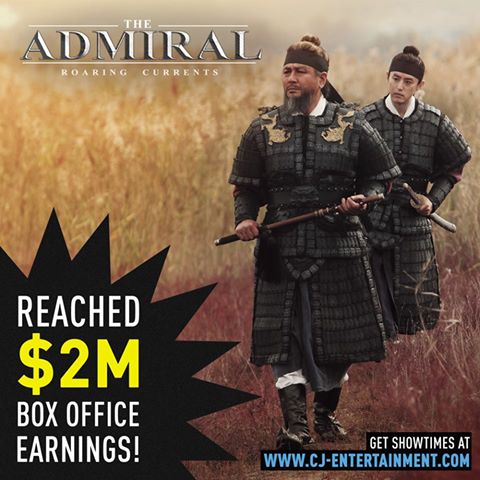 The movie is based on the actions of legendary Admiral Yi Sun Shin, when his fleet of 12 ships defeated a Japanese armada of over 300 ships during the Japanese invasions of Korea between 1592 to 1598. Not bad for a guy who had no Naval experience when he took command. This battle is one of the most notable Naval victories in maritime history.

To get the showtimes, visit CJ Entertainment’s official website.