Share on FacebookShare on Twitter
MyMusicTaste is happy to announce that monster K-pop rookie boy band ATEEZ announced their next promotional song through a special voting platform on MyMusicTaste, an online service that allows fans to request their favourite artists’ live performances in their cities.
In collaboration with MyMusicTaste, KQ Entertainment and ATEEZ are asking their fans to help them choose their next promotional song through a three-round voting project: ‘ATEEZ x ATINY: Vote For ATEEZ Next Song’. 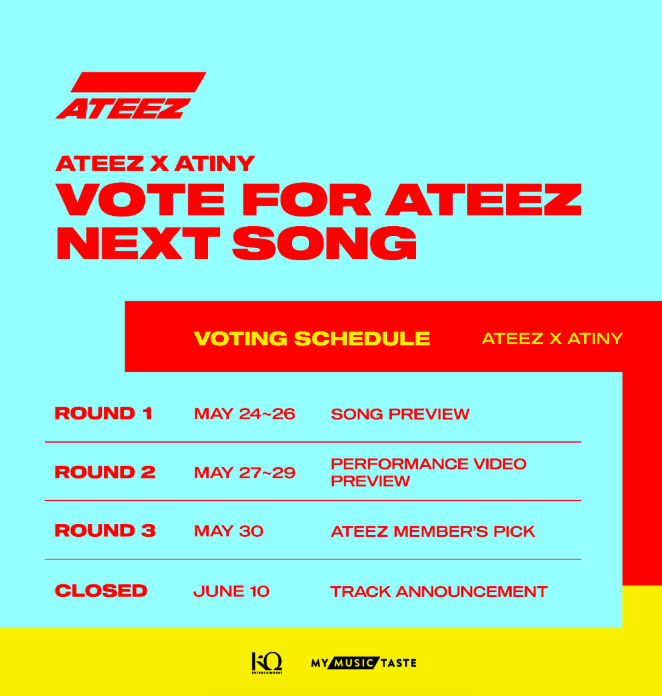 First round: May 24 at 18:00 Korea time – Preview short audio clips of two potential title songs.
Second round: May 27, also at 18:00 Korea time – Preview of the choreography for the same two songs.
Third and final round: May 30, 18:00 Korea time – Voted by ATEEZ members through a video of the members voting.
KQ Entertainment‘s rising 8-member boy band is already being hailed as one of the main representatives of the new K-pop generation for their well-crafted performances and producing abilities. ATEEZ received worldwide attention even before their official debut through their YouTube series ‘KQ Fellaz Exciting USA Training‘. Their practice videos also went viral, with ‘KQ Fellaz – Performance Video Ⅰ‘ having over 2 million views.

The up-and-coming K-pop group also broke records by selling out both of their first North American and European tours, also organised and promoted by MyMusicTaste, in 15 cities earlier this year. The band has also been featured on Billboard, MTV, The Grammy, DAZED and many more outlets around the world.

For more information about this project, visit this link.
Keep following Officially Kmusic for more music updates!
Edited by Lindsay
Thanks for rating this! Now tell the world how you feel - Share this on Twitter and on Facebook.
(Nah, it's cool; just take me back.)
MOODTHINGY
How does this post make you feel?

Scroll for more
Tap
N. Flying relax on a ‘Rooftop’ in new MV
W24 invites you to ’Eat, Play, Sing’ with them in Gosung
Scroll
Loading Comments...