B1A4 Joins Their Own Flash Mob in San Francisco

B1A4 Joins Their Own Flash Mob in San Francisco

K-Pop dance flash mobs are being performed all over the world for fans to show how much they love the music and artists. But did you ever think how cool it would be for an actual K-Pop artist or group to join their own flash mob?

Well BANAs in San Francisco got to live the dream on the 10th when the members of B1A4 joined in their flash mob set up by Mnet America!

The group is on their 2014 Road Trip Tour in the US right now and were surprised when they saw their fans performing a flash mob and just had to join in!

Okay, that was pretty awesome, you have to admit. Imagining dancing with your favorite group! If I could dance without looking like an idiot, it would be a dream come true!

Baro even posted the picture below to his Instagram thanking the fans for the experience saying, “Group picture with flash mob dancers. ThankU for the suprise!!! ThankU”. 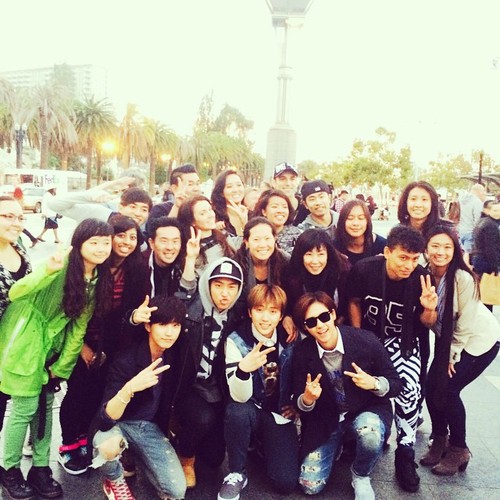 Mnet America will be uploading the full episode of B1A4’s US tour experience on the 5th of November so stay tuned to their YouTube channel right here.