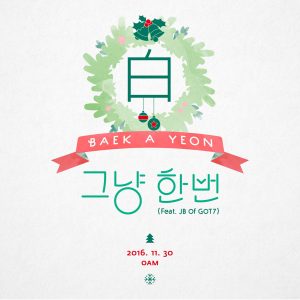 On November 29th, JYP Nation dropped the latest teasers for their holiday collaboration with Baek Ah Yeon and Got7’s JB! The teasers were released on the JYP Nation official Instagram and featured snippets of the soon to be released song. Though the clips are short, both the singer’s voices are sweet and perfect for the holiday season!