With only a few days until it’s much anticipated premiere, ‘Goblin‘ finally gives an inside look to the fairy king and queen.

‘Let’s Fight Ghosts‘ very own Kim So Hyun has traded her ghost like powers not for wings, but more regal wear along with her king Kim Min Jae as new stills show the pair in beautiful historical wear. Though their appearance will be short, only in the beginning of the drama, by the look of their faces they’ll play an important role.

The production team gave nothing but praises to the young stars saying “Kim So Hyun and Kim Min Jae wonderfully portrayed the graceful images of a queen and a king. Both roles carry an important meaning to the drama.”

‘Goblin’ is about a goblin (Gong Yoo) who seeks mortality but in order to find it he must marry a human. Along for the ride is an amnesic grim reaper (Lee Dong Wook) and a girl with an interesting fate (Kim Go Eun) 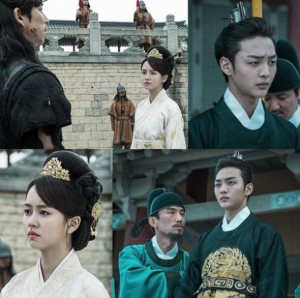