BigHit announces that ‘Bird’ will no longer spread its wings

BigHit announces that ‘Bird’ will no longer spread its wings

On 16 September, BigHit announced that they would not be releasing Japanese title track ‘Bird‘, due to production reasons. This comes just days after BTS announced that they were collaborating with AKB48 Producer Yasushi Akimoto for the new track. Check out the announcement below: 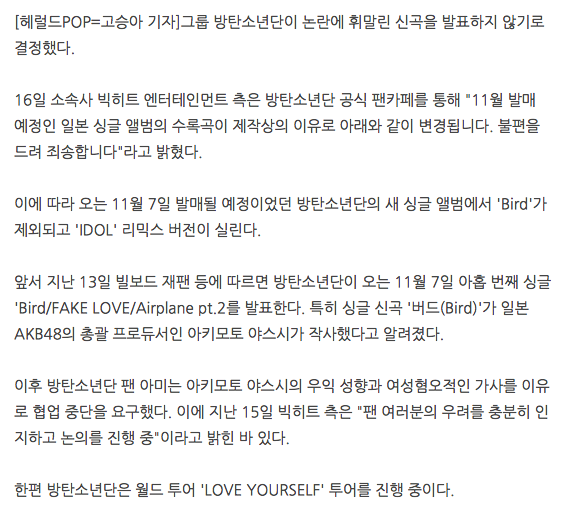 It reads: “BTS have decided not to release their controversial new track.

On September 16, BigHit announced “The following single album from Japan, scheduled to be released in November, will change as follows for production reasons. Sorry for the inconvenience,” on the official fancafé.

As a result, a remixed version of ‘IDOL‘ will be released with the Japanese album in November.

According to Billboard Japan on September 13th, BTS announced the upcoming Japanese release of their new single album. The the tracks were, ‘Bird,’ ‘Fake Love‘ and ‘Airplane Pt. 2.’ Particularly, it was announced that the new title track would be written by Yasushi Akimoto, AKB48‘s executive producer.

Fans protested, demanding that the collaboration be stopped as Yasushi Akimoto supported right-wing politics and wrote misogynistic lyrics. On September 15th, BigHit said “We are fully aware of your concerns and are in the process of discussing it.” ”

BigHit has also announced that the album will now also include remix versions of ‘IDOL‘, and the Japanese version of ‘Fake Love‘.

BTS themselves are currently on their ‘Love Yourself’ world tour, and are headed to Hamilton, Canada for a two day concert before heading back to America.

Let us know how you feel in the comments below!

Officially Kmusic will always keep you updated on the latest news!