With the recent success of their comeback gathering just under 2.5 million views in 6 days, BTOB have revived their reality show ‘The Beat‘ with live broadcasts.

On November 12th, rapper Ilhoon did his first individual broadcast. Ilhoon is known to be featured in many songs and has wrote for Cube artists such as, Hyuna and CLC. With his talent for song making, he wrote and composed two songs on the ‘New Men‘ album. He displayed massive thank you’s to the fans. Melodies then wondered about a solo album and Ilhoon announced that while nothing is set yet, he is in preparations for one! Along with the announcement, Ilhoon played some songs he had written and some he had already finished.

For now fans can watch their individual broadcasts as well as group ones on their V Live channel and catch their performances for their ‘I’ll Be Your Man‘ promotions! 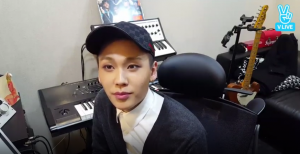 Check out their latest performance below: