At the rate they’re going, soon there won’t be any records left for BTS to break!

BTS‘ meteoric rise in the global music industry has been underlined with the group’s latest album ‘Love Yourself: 承 Her‘ debuting at number 7 on the Billboard 200 album chart!

The chart ranks the most popular albums in the USA based on a number of measures of public consumption, including traditional physical album sales as well as data retrieved from streaming services. By charting at number 7 BTS have broken the record for the biggest sales week in K-pop as well as the record for the highest-charting K-pop album, which they previously held with ‘Wings‘, peaking in at 26th place. ‘Wings‘ and ‘Love Yourself: 承 Her‘ remain the only K-pop albums to chart within Billboard‘s top 40 albums. 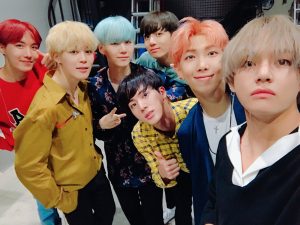 Achieving a ranking inside the top 10 albums in America is just the latest in an incredible year of achievements for BTS, with the group topping Billboard‘s Social 50 chart last week, as well as becoming the first K-pop group to win a Billboard Music Award back in May. BTS also holds the record for the K-pop group with the most entries on the Billboard 200 album chart, with ‘You Never Walk Alone‘, ‘The Most Beautiful Moment in Life: Young Forever‘ and ‘The Most Beautiful Moment in Life: Pt. 2‘ placing alongside ‘Wings‘ and ‘Love Yourself: 承 Her‘. The only other K-pop acts to hold multiple places on the chart are G-Dragon with three entries, and BIGBANG and EXO with two each.

‘Love Yourself: 承 Her‘ has also debuted at number 8 on ARIA‘s Australian Top 50 Albums Chart, marking BTS‘ first appearance on the Australian chart.

Ranking so highly on a foreign music chart is an incredible achievement, and testament to the hard work of BTS and their team. Do you think ‘Love Yourself: 承 Her‘ could mark BTS‘ first global cross-over hit?