After A Decade, Wonder Girls Is Disbanding

After A Decade, Wonder Girls Is Disbanding

After some months of speculation and having their image removed from the outside of JYP Entertainment’s building, the company confirmed that Wonder Girls is indeed disbanding.

The official statement was released on January 26th, explaining what the futures of the members will hold. While Yubin and Hyerim have renewed contracts with JYP, Yenny and Sunmi have opted to leave and pursue other interests. Yubin and Hyerim also plan to try their hands at acting and hosting.

Below a translation of that statement:

“We are here to inform you of the decision to disband Wonder Girls. This decision comes after a long period of discussion.

Yubin and Hyerim have renewed their contracts with JYP Entertainment and will show new sides to them in various fields including acting, and MC-ing. Yenny and Sunmi will, unfortunately, be leaving the label to pursue other paths.

To thank the fans who have unconditionally been by their side for the past 10 years, they will release one last digital single on their 10th anniversary.

We want to thank fans worldwide who’ve been together with Wonder Girls and we will continue to support the remaining and parting members in future.

This news of the group disbanding still comes as a shock, especially to fans who have been with Wonder Girls for the last 10 years. And so following in the footsteps of another prized girl group who disbanded last year, Wonder Girls will be releasing one final farewell song.

JYP also uploaded a video for the girl group, titled “Thank You For Being So Wonderful“, to their YouTube channel. The video recaps some of the girls’ best moments together. The members also each left their own messages to their fans, in the form of voice-overs during the video:

Yenny: “I appreciate the ten years we’ve been together and thank you for the memories we will take with us.”

Sunmi: “I feel sad giving you this news. Thank you to all the fans who have supported us.”

Yubin: “You have always supported and protected us. Thank you for all the memories that I will treasure.”

Hyerim: “Whenever you hear our songs anywhere, I hope you remember the days we have been together and be comforted by the memories.” 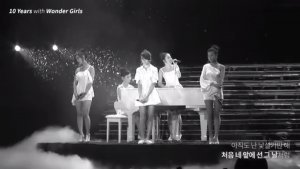 The girls then left a longer message as one, which is translated below:

“It’s been almost decade since we’ve been performing together and there were both happy and sad moments. Thank you for giving us such a memorable moments that we won’t ever forget. Also thank you to the fans who supported, believed in and was faithful to us for a decade. We feel sorry but we will always remember those moments in our heart. Listen to our music as a comfort for when you miss us. Please remember this, we’re Wonder Girls.”

Check it out video below:

The final song will be released on February 10th so be sure not to miss it!

What are your best memories of Wonder Girls over the past decade? Let us know in the comments!