Dong Wook Gets Some Much Needed Love From Yoo In Na In New ‘Goblin’ Stills!

Dong Wook Gets Some Much Needed Love From Yoo In Na In New ‘Goblin’ Stills!

With the first two episodes having ratings that beat a multitude of records, ‘Goblin‘ is a total hit! Despite the 9o minute long episodes it’s truly lassoed in viewers with it’s comedic flair.

In this comedy sits the grim reaper who definitely needs some loving after the torture the goblin has put him through. The pair have been a big source of comedy, along with Duk Hwa. But in some new stills, our poor Dong Wook finally gets some loving. In the recent photos, the mysterious chicken shop owner Sunny greets the grim reaper. Interestingly enough, before reaching a hand, out the grim reaper is seen in a tearful state which causes viewers to ask what could have made the god of death cry? The stills are interesting, considering the fact that the production team have said before that Yoo In Na and Dong Wook are showcasing the complete opposite kind of romance, compared to that of the goblin and Ji Eun Taek who have a more cute romance. Instead, the grim reaper and Sunny will have a sexy kind of romance.

The production team have left fans wanting more saying, “The scene shows the first meeting between Lee Dong Wook and Yoo In Na. Their romance will be a delicate and mysterious one as it develops throughout the drama.” Making fans everywhere crave Friday night to watch the next episode.

To watch the relationships develop and see what makes a grim reaper cry, catch ‘Goblin’ Fridays and Saturdays! 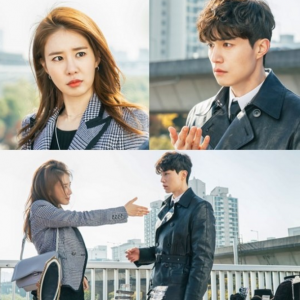