As the tale goes, a goblin is created from a human and with their extravagant powers the goblin also gains immortality. He is doomed to watch as the ones he loves die over and over during his multiple lives, until he finds a bride that will end his suffering with death. When a great warrior is turned into a goblin he battles over centuries until one fateful day when his soft heart bends to save a woman and her unborn child. The child gains powers that are unheard of for a human; being able to see the grim reaper, the ability to see ghosts, and another strange ability she discovers on her 18th birthday. One fateful meeting has the goblin coming face-to-face with the peculiar human, Eun Taek, who has the power to break his curse. Adding in the fact that the god of death has become his roommate, the goblin searches for the answers to gain mortality but gets tripped up when his feelings get in the way. Along for the ride is the goblin’s nephew, Duk Hwa, a rebellious heir, and a peculiar chicken shop owner, Kim Shun, who falls for the grim reaper. 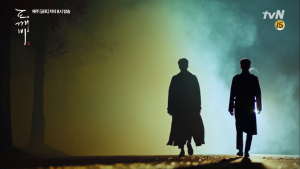 This show is absolutely amazing! I was initially worried about the fact that the first two episodes were 90 minutes long, but it was so worth it. The drama is completely addicting, Dong Wook has me laughing as the grim reaper who just wants to do his job, and Gong Yoo who won’t let that happen. Their relationship has me cracking up whenever they meet and truly makes the show. While I am a Melody, this is my first time seeing Sungjae in a drama and I have to say I’m super impressed! While I am slightly disappointed in the fact the character of Duk Hwa is similar with Sungjae, the talent doesn’t lack. Of course I couldn’t do a review without bring up the brilliant Kim Go Eun who ties everything together. I watched her in both ‘Cheese in the Trap‘ as well as ‘Monster‘ and I love the diversity she has as an actress. This character draws in the innocence of youth with the hardship of having powers. One thing is that it is very odd is to have Gong Yoo, who is older, with Go Eun but it doesn’t feel creepy- I actually shipped it as soon as they first met. The chemistry between the two is impeccable, in fact each character has chemistry with each other which makes the show perfect!

It’s a 10/10, I would recommend this as highly as I can. The chemistry is beautiful, the music is gorgeous, and the comedy is just enough to take the edge off truly one of the greatest shows to come out of 2016!

What were your first impressions on ‘Goblin’?