Epik High took another great step in their music journey recently. They joined Coachella, performing at the Indio, California Music Festival on 17th to 24th of April, as the first ever South Korean music group to do so.

Upon this event, NBC News was able to get an interview from Tablo, the leader of the trio, over the phone. During the interview, Tablo revealed his true feelings about their achievement. He stated that it was exciting for them as they were to perform in front of a crowd, who might not know who they are. He brought his memories of the days that Epik High performed in front of 10 people to 100, in a zoo to the animals and 2 drunkard men, how they succeeded to be on huge stages and claimed this felt like the same.

It is indeed a reason to be excited that Epik High was invited by Coachella to perform on the stage. According to Tablo, they were chosen over all the other Idol and Indie groups because they maintain a style in-between, which is original and independent. They were expecting to perform to a crowd of strangers. I’m pretty sure Epik High would have got its fandom expanded in 1000s instantly at the show.

When he was asked about his opinion about receiving love from across the globe, he stated that conquering the globe is not their intention. They only enjoy doing music, which makes them lucky to be loved like that. According to Tablo, Epik High is at a very low-key in Seoul.

The conversation was absolutely fun and interesting as Tablo revealed a lot about himself and the group. Click here to check out the complete interview. 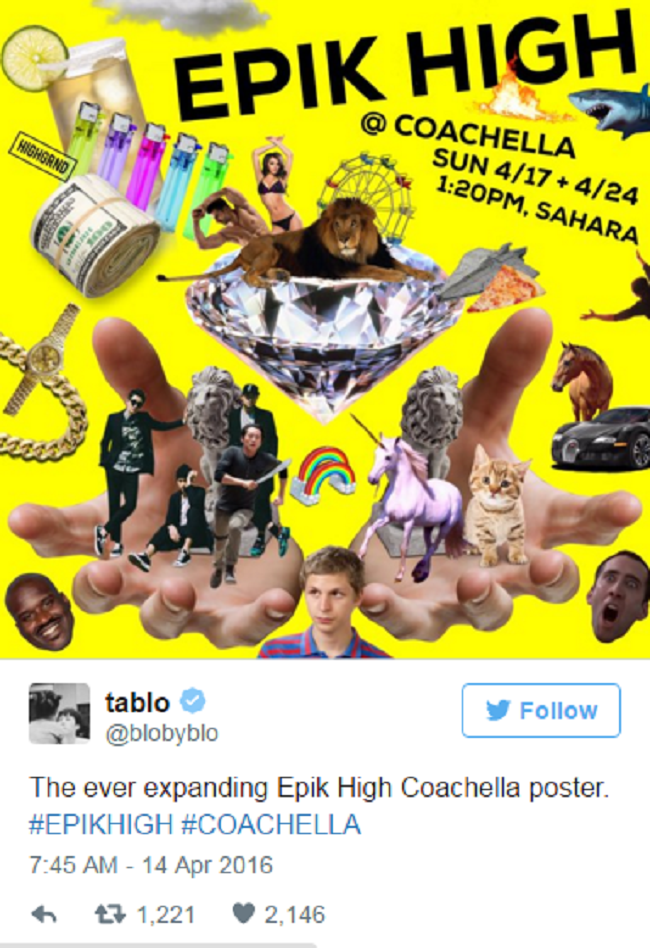 Epik High is a trio consisting of Tablo, Mitra Jin and DJ Tukutz. Although they released their debut album ‘Map Of The Human Soul’, in 2013, were active from years before. Currently they are with YG Entertainment. In October, 2015 they released their 8th album ‘Shoebox’, which is the latest from the group. Since the beginning to now, Epik High has a wonderful story written in its memory, and so they made history by joining Coachella.

However, prior to this the group showed off its colors at South by Southwest 2015, being mostly discussed turning group’s name one of most used hashtag at the festival.

Shouldn’t Epik High fans celebrate this success? Share your opinions about this with us in the comments below.

Stay tuned to Officially KMusic to know all the latest happenings in the K-Pop world.