This year’s Mnet Asian Music Awards was full of star studded celebrities and amazing performances! Also known as the MAMA Awards, the show was once again hosted in Hong Kong. 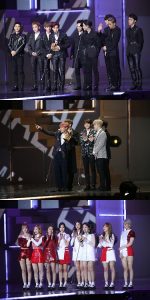 Scroll for more
Tap
SECHSKIES wants to be a couple, AGAIN?!
Hong Seok, Yan An And Kino Are Enigmatic In Latest Pentagon Teasers
Scroll
Loading Comments...