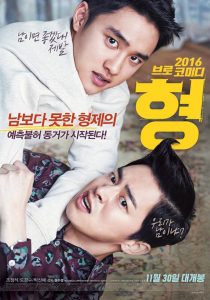 EXO’S D.O. and Korean actor Jo Jung Suk will be guesting on the variety show, Running man! Both the actors have been doing press tours for their new movie, ‘Hyung.’

‘Hyung‘ is set to come out on November 24th and the 327th  Running Man episode will premiere the following Sunday November 27th on SBS.

Are you guys excited to see the shenanigans these two actors will go through on Running Man? Let us know in the comment box below!