Victoria of f(x) has recently posted a picture of food on her official Weibo account. What made the picture the center of controversy was the reflection of TVXQ‘s Changmin on the spoon, creating rumors of the two being in a relationship.

On February 24th, Victoria wrote: “Happy Yuan Xiao~ Even though I couldn′t eat Yuan Xiao, I made Bak-Kut-Teh and seasoned radish” and attached photo of the food. 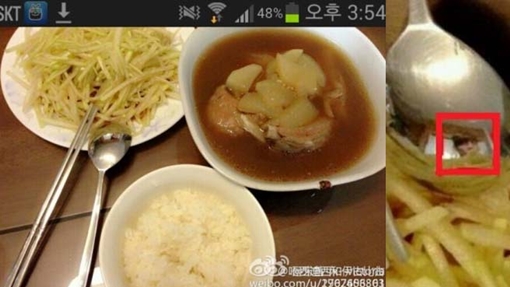 Fans managed to spot Changmin’s reflection on the spoon and started to speculate that the two are in a relationship.

Victoria then deleted the picture and replaced it with another version, without the spoon showing.

SM Entertainment responded to the rumors saying: “After checking, we found out that the person reflected off the spoon is Max Changmin. However, the two were not alone, but Shim Jae Won and other staff members were there as well.”

They have also added that Victoria really likes to cook and always invite her friends over for a meal.

The agency has also commented on why the singer has deleted the picture. They said: “We didn’t ask her personally, but due to the overwhelming response, we believe she became scared.”

Scroll for more
Tap
Miss A Poses for a Group Photo
4minute’s Hyuna on the Cover of Britain’s “POP” Magazine
Scroll
Loading Comments...