Gallup Korea’s “Most Outstanding Singer of the Year” Revealed

Gallup Korea’s “Most Outstanding Singer of the Year” Revealed

PSY and Girls’ Generation tops the “Most Outstanding Singer of the Year” for 2012!

PSY gathered a total of 24.4% of the votes claiming the number 1 spot. It was followed by Girls’ Generation who got 19.8% and even though the only Korean activity in the music scene was their first sub-unit, Taetiseo, they still managed to rank high in the chart. BigBang was in 3rd place with 9.5% then IU with 6.9% and Jang Yoon Jung with 6.6%. 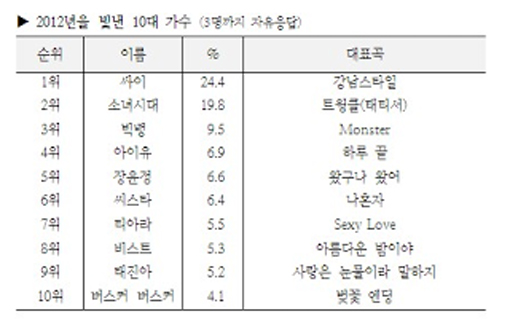 Gangnam Style was also awarded as the “The Best Song of the Year”. SISTAR’s Alone came in second, followed by Busker Busker’s Cherry Blossom Ending and TaeTiSeo’s Twinkle. The “Best Newcomers of the Year” was given to Ailee and Busker Busker.