Multitalented boy group GOT7 have conquered every concept they have tried out in the almost five years that they have been around. Since their debut song ‘Girls Girls Girls‘ was released on January 14th, the group have made approximately two to three comebacks per year. They have wowed fans by constantly changing up their concepts every time and pulling each one off really well.

Their loyal fans Ahgases know the group for their fun and quirky personalities, as well as their energising music. They have a huge international fan base, which has allowed them to tour the world. Furthermore, three out of seven of their members are foreigners. Due to this fact, they have been welcomed with open arms in their own home countries. Among the group, they can speak around six languages, which has enabled them to connect with many of their fans. Even though a lot of people love them for their amazing variety skills, they have impacted fans with their musical versatility as well.

GOT7 was the first JYP Entertainment boy group to debut since 2PM. Since 2PM were so successful and are now considered legends in the K-pop world, people had high expectations of GOT7. Luckily, they lived up to these expectations.

‘Girls Girls Girls‘ is a strong debut track that has hip-hop vibes. The choreography is simple yet iconic; it matches the lyrics of the song. Furthermore, it incorporates martial arts tricking and b-boying, which are their specialties. Fans will always remember this MV as it starts with all the members in school uniform riding on hoverboards towards an underground club scene. Members of TWICE are also in the MV.

‘A‘ is a fun, catchy and bubbly track that is a stark contrast from ‘Girls Girls Girls‘. This was the first time that they tried out a cute concept. It was shot in Malaysia, and the MV is funny as the members fawn over Sana from TWICE. It is more playful as it features the members fooling around with each other and even sabotaging each other as they try to get her attention. From this MV, fans saw a completely different side of the group.

GOT7 proved that they were musically versatile with the release of ‘Stop Stop It‘. Even though the members themselves are not particularly fond of this release due to their cringeworthy outfits and hairstyles, fans loved this comeback because of their sexy dance moves and the catchy song. In comparison, this comeback was more similar to their debut track than ‘A‘.

GOT7 achieved massive international success with their next two comebacks, which were hugely different from each other. As of the end of 2018, ‘Just Right‘ and ‘If You Do‘ are their most iconic songs and most viewed MVs on Youtube.

‘Just Right‘ is GOT7‘s most famous song, as it currently almost has 250+ million views on Youtube. They perfectly executed the cute concept in this comeback. They wear colourful outfits and are shrunk down into miniature versions of themselves in the MV. Bambam even lies in a bowl full of milk and cereal. Even though the MV may be unconventional, the members definitely get the message across – that the girl in the MV does not have to change herself for others. She is “just right” the way she is. This MV was more similar to ‘A‘, but we definitely saw a softer and cuter side of GOT7 in ‘Just Right‘.

On the other hand, ‘If You Do‘ is the polar opposite of ‘Just Right‘. While ‘Just Right‘ features a fun and simple choreography with a bright and colourful MV, ‘If You Do‘ is dark and sentimental. The message of the song is deep; it explores the darker sides of relationships. The outfits for this comeback were basically all black – black jeans, mesh tops and most importantly, leather jackets. The choreography for this is one of the group’s hardest, as it involves amazing footwork that is almost impossible to imitate. It is hard to believe that the same group that sang ‘Just Right‘ performed ‘If You Do’ as well.

There are three instalments in their ‘Flight Log’ series: ‘Departure‘, ‘Turbulence‘ and ‘Arrival‘. Each instalment is accompanied by a strong and hard-hitting title track that showcases the group’s musical versatility.

Compared to the other title tracks in this series, ‘Fly‘ is definitely not as dark. The song has R&B elements that is accompanied by lots of falsetto-style vocals. As the first instalment, the MV in particular was definitely memorable. The MV focuses mostly on their sharp choreography that they perform in an empty ground. Meanwhile, Jinyoung stands on the edge of a rooftop. By the end of the MV, each member literally flies in the air. During promotions for this comeback, Mark said that this MV was special to him as he had always wanted to experience the feeling of flying.

With ‘Hard Carry‘, GOT7 experimented with a new style that they had never tried out before. To match ‘Turbulence‘, this song features a forceful and aggressive beat that fans had never heard before. It is an EDM-style track that matched a dark-themed MV. The MV was full of dark colours that was similar to ‘If You Do‘. However, the song has a completely different style to ‘If You Do‘. While they perform the complex and fast-paced choreography, fire is literally around them. Fans will definitely remember this comeback as ‘Hard Carry‘ is their most energising song.

‘Never Ever‘ was the concluding song of the ‘Flight Log‘ series to end their journey. ‘Never Ever‘ incorporated elements of electronic-house music that featured synth beats, accompanied by their amazing vocals. In particular, JB and Youngjae showcase their abilities to reach high notes in the chorus of this song. Like the rest of their MVs in the series, the lighting of ‘Never Ever‘ is dim. The MV features many references to their previous two comebacks that were in the ‘Flight Log‘ series. At the end of the MV, Jinyoung finally wakes up in a medical examining room. It is up to fans to decide how the series has ended.

Within this year, ‘You Are‘, ‘Look‘ and ‘Lullaby‘ are the title tracks of GOT7’s most recent comebacks.

‘You Are‘ was the first title track in which one of the members – leader JB – produced the title track. Furthermore, all the members participated in creating this album ‘7 for 7‘, so this album has a special place in their hearts. Compared to their previous comebacks, ‘You Are‘ is a lot more sentimental and emotional. It definitely showcases their vocal talent more – in particular, JB and Youngjae – as the chorus involves a long high note. Fans will see a softer and gentler side of GOT7 as the chorus features the group performing in all-white outfits on a grassy field. This MV also displays how international the group are as it is filmed in Hong Kong, Jackson‘s hometown. Throughout the MV, the members are featured in different tourist spots around the country.

Meanwhile, the MV for ‘Look‘ is more abstract. ‘Look‘ has some EDM elements and a mellow beat that increases during the chorus. The choreography is not as complex as their other title tracks, but it does involve a lot of footwork with corresponding hand movements. The MV is interesting as it zooms up on their faces during the climax of the song, which is unique compared to other title tracks.

Even though the MV for ‘Lullaby‘ features pastel colours, the song is an EDM-style track that has a fun but difficult choreography. This song is addictive and catchy – it will definitely get stuck in fans’ heads. It involves a lot of jumping and fast movements that make it fun to imitate. The MV is similar to ‘Look‘ as it is quite abstract. For example, it features flying cars, train stations and neon lights. The choreography is also really fun to perform. Since the track is called “lullaby“, they even incorporate gestures associated with sleep into the choreography. This comeback in particular was really strong and definitely left an imprint in people’s minds.

From the beginning, CEO Park Jin Young wanted GOT7 to be a group that incorporated martial arts into their musical style. Therefore, for ‘Girls Girls Girls‘ and ‘A‘, during the dance breaks towards the end of the songs, Mark and Jackson usually add in elements of martial arts. Even on ‘WIN: Who is Next?‘, Mark and Jackson performed an impressive martial arts sequence in which Jackson pushes Mark while he is flipping in the air. In the process, Mark flips in the air over another person who is squatting down. This definitely gave JYP an edge in his battle versus YG. However, GOT7 do not focus so much on martial arts anymore in their dance routines. 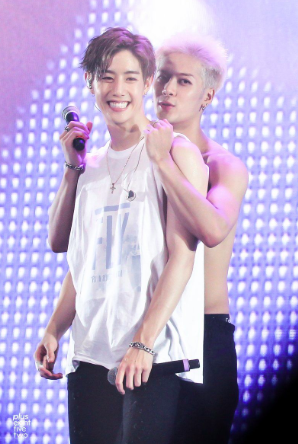 In terms of songwriting, the CEO originally penned all their hit tracks. Gradually, as the members grew musically and became more involved in the songwriting process, he has allowed the members to take the lead in GOT7‘s music production. Most recently, their leader JB has contributed greatly to the production of their songs. However, he is not alone – for their most recent album release ‘Present: YOU‘, each member had their own individual solo song. Individually, they penned their own song and even had an MV for each one. This was the first album in which the group had ventured into solo songs, which marks their growth as musical artists. 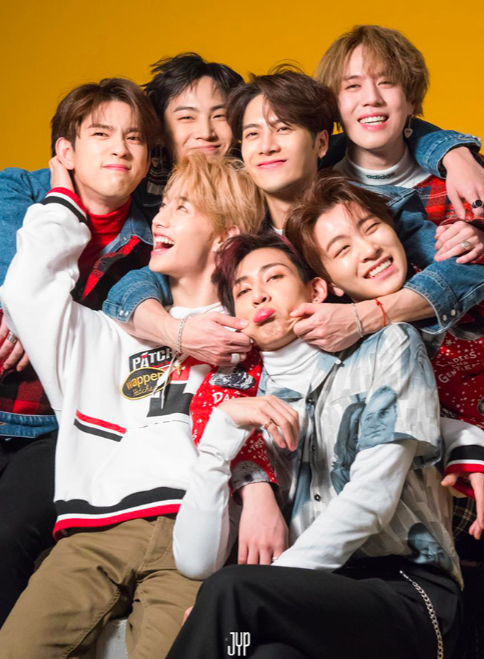 Through their various concepts that GOT7 has explored since debut, they have effectively pulled each one off, no matter how abstract or different it might have been from what they are used to. They have successfully proven that they are not afraid to venture into new territories and try new things. This just shows that they are musically versatile as they execute each concept perfectly. There is no telling what they will try next in the future – but we know that they will not disappoint!

What are your thoughts about GOT7‘s evolution of music? Let us know in the comments below.