Officially Kmusic would like to wish B.I.G. a very happy debut anniversary! 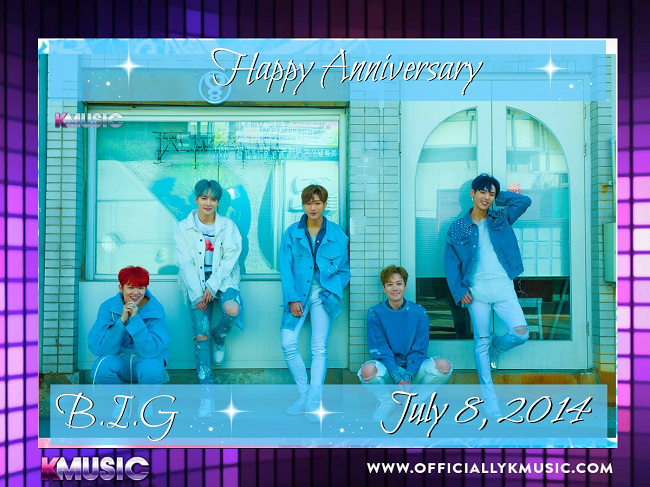 B.I.G (Boys In Groove) is a 5 member group that debuted on July 8th 2014 under the company GH Entertainment.

J-Hoon 제이훈 (Im Jung Hoon/임정훈), who was born on July 15th, 1990 in Seoul, South Korea.
He is the leader of the group, as well as dancer and vocalist.
His stagename comes from a shortening of his real name Jung Hoon, it is a name he have been using since he was active in the street dance stage.

Benji 벤지 (Bae Jae Wook/배제욱), who was born on May 3rd, 1992 in Indiana, United States of America.He is the main vocalist of the group.
He came to Korea in 2011/2012 with the purpose of becoming a singer, and trained for 3 years before debuting.

He is the main dancer of the group.

His hobbies are teasing a tired MinPyo and poking a sleeping J-Hoon, watching movies and sleeping.

Minpyo 민표 (Guk Min Pyo/국민표), who was born on November 15th, 1994 in Gwangju-si, South Korea.
He is the main rapper of the group.

He makes a lot of noise when he sleeps. According to J-hoon it is to the extent that he had to kick Minpyo out of their room because he was not able to sleep.

He is the maknae of the group as well as a rapper.

He used to have a part-time job at a convenience Store. The store also sold soft serve ice creme and he would give a little bit extra when the customers were young kids.

Written by, featured image by, and collage by: Admin Risa