INFINITE Is In Search For Healing On ‘Infinite Showtime’ Episode 8!

INFINITE Is In Search For Healing On ‘Infinite Showtime’ Episode 8!

INFINITE is on to a different project again. This time, members are on a healing vacation, on their own.

The last few episodes were quite fun, as well as tiring for the boys. Maybe that’s why they decided to spend some time on their own, doing what they think they need to, heal themselves.

Kim Myung-soo, a handsome, heavenly man full of aegyo is taking a bus ride to somewhere. It seems like a long journey. He’s on his phone, searching for a place to go. Given a chance to go on a vacation, indeed it has to be somewhere memorable. Yeongjong Island! He got his best choice. If he was given a chance he would like to go to a beach where there’s only few people around, and he loves to take some photos. This is an ideal place for some good photography.

His destination has to be reached on a boat. Whilst getting ready for the boat ride he wishes to see the sun-set which happens much later, at the beach. After hearing the news of Infinite’s L is on the sea, seagull fans are rushing to meet him. Myung-soo decides to treat them with some prawn crackers. Forget about you and me, even seagulls can’t stop being attracted him. 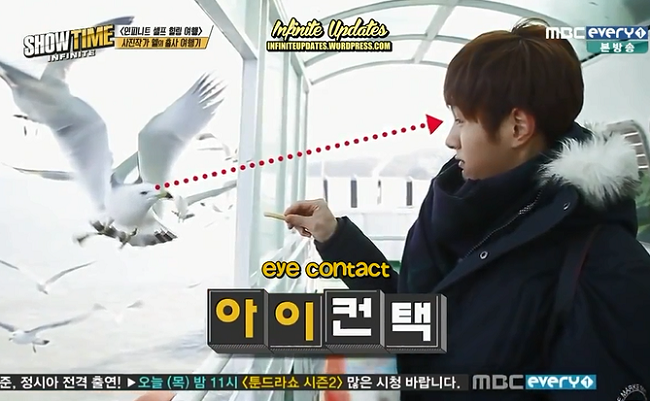 Although it is a riot at the beginning, after a long time flirting time with Myung-soo, seduced by his charm, the seagulls are finally under his control. 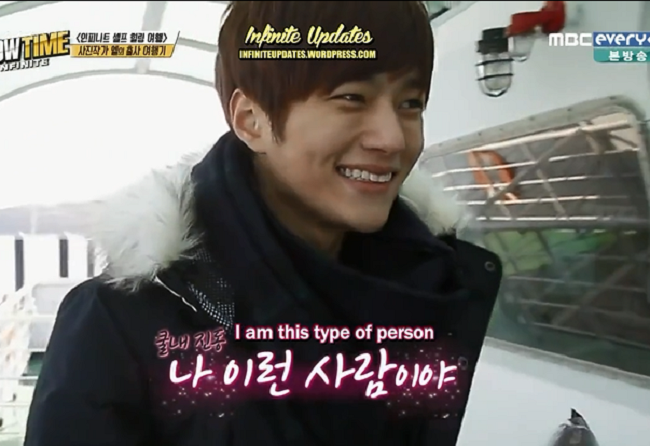 I’m sure those little bites of the seagulls who were excited to see him for the first time didn’t hurt him that much.

Photographer Myung-soo arrives at the Hanagae Beach. How would he spend the rest of the day?

On the other side, Dong-woo is going to have some adventures. He got a lot of bags, looking like a diva while out camping. Riding a luxury car, singing a song, enjoying the weather, which he feels he can do anything with, he seems so thrilled.\

When he reached the camping location, things turn a bit weird. He get a hand cart, which he had seen for the first time, and some additional stuff to push to his location.  He reaches a deserted area where only some tents can be seen. His healing camp expectation was to meet new people, communicate, hear their stories and enjoy the nature. Anyway, he doesn’t seem too disappointed. He set the table first, then the two chairs; one for himself and guess for whom the other one? How will he spend his day in the camp? 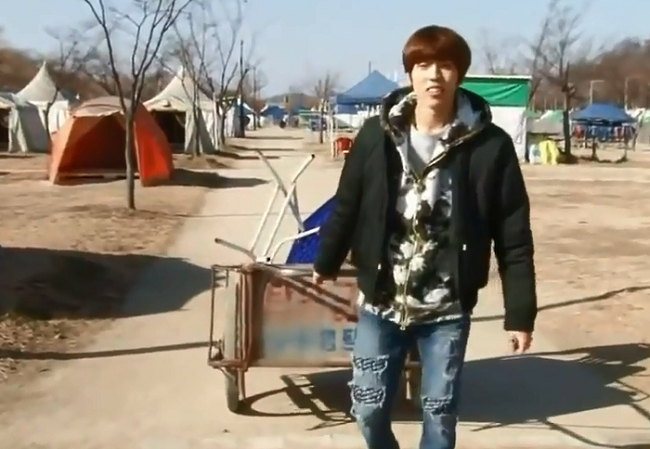 Wait! who’s roaring in the winter kingdom? Shhh! someone is soundly sleeping.

What is our beauty king Lee Sung-jong is up to? He’s having a fabulous time at a hot-springs. He dives, swims, plays in water and rides a slide that seems good fun. He actually rides the slide until they are closed. He’s a pretty energetic kid. Looking at him, it reminds me of a dolphin. Jongpin! It doesn’t end there. What’s his next step? 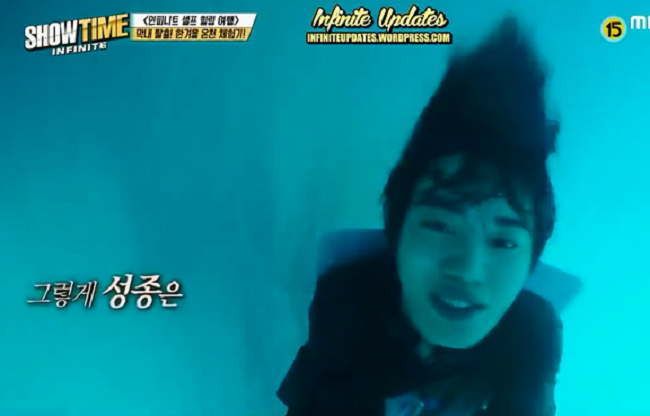 What’s more important is that, Sung-jong’s beauty secrets are revealed. I’m sure you wanna know.

Leader, Kim Sung-kyu seems to have some wonderful time in a theme park. He has been to a theme park only nine years ago and he likes this place now. He has many fears, including a fear of scary rides, and he wants to overcome it using this chance. He hopes that will give him healing. He end up finding some great rides to give him healing. 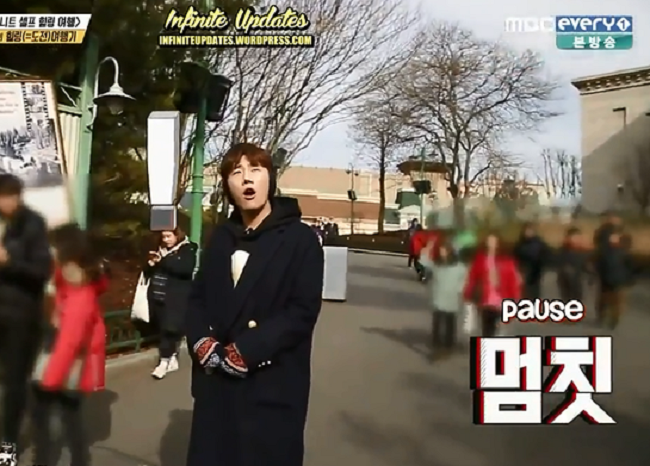 Rather than describing it here, I would want you to watch him in the episode. I’m having a heavy heart for our adorable Infinite’s hyung (elder brother). Finally, he proves his brave self. Well done Sung-kyu! We are proud of you! 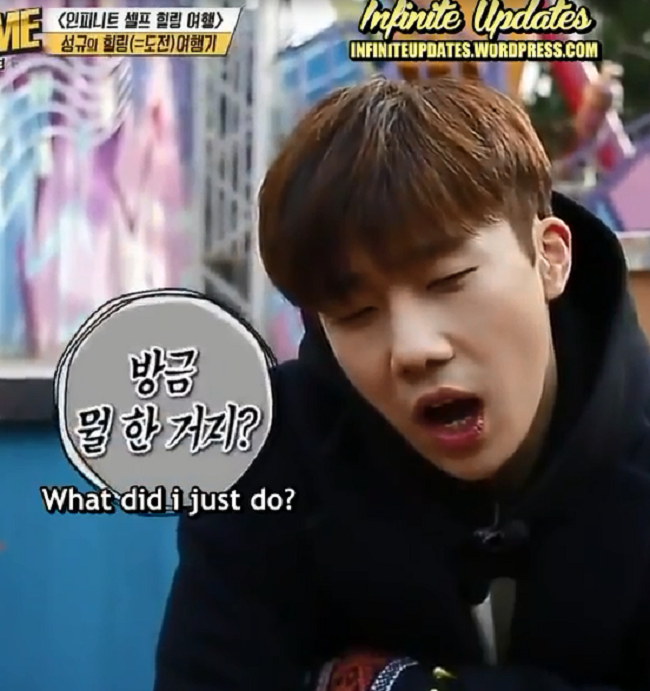 Finally, his critical stage of life ends. And look how happy this prince on a horse, enjoying his favorite ride.

Next in the line is Hoya. He is going somewhere on the train. Yes! He’s going back to his memories. Interestingly, this is Hoya’s first train ride. He’s really excited and happy. He visits a place where he had spent his younger days; the time when he was just a baby. Busan! Look how he finds his history. 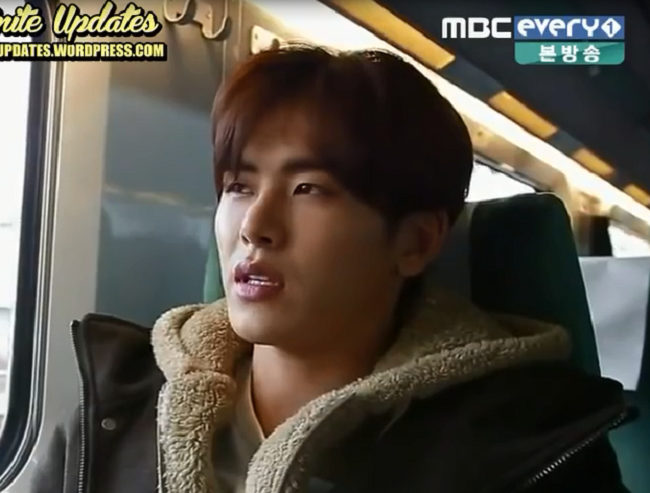 I adore this charismatic and seductive man. He has a thoughtful character and a deep personality.

Had fun with INFINITE? I know, to know what’s happening with Lee Seung-yeol and Nam Woo-hyun, you will have to wait just a few more days.

In the meantime, let us know how you feel about this healing project.

Stay with Officially Kmusic to know all the latest happening in the Korean entertainment world.