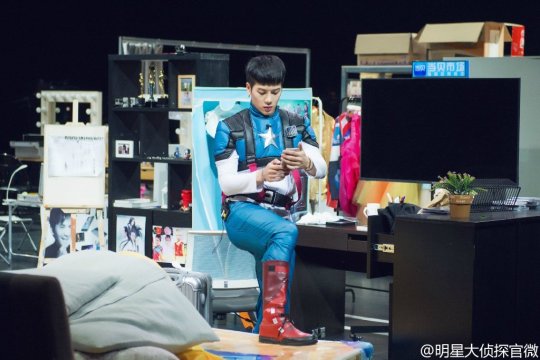 Got7’s Jackson Wang is set to star in the popular Chinese mystery variety show ‘Crime Scene’! The Chinese variety show, which is based off the Korean version of the show of the same name, aired its first episode on March 27th on HBS: Mango TV, and has since gained increasing popularity with a string of popular stars lining up to guest on the show.

Dressed as Marvel Superhero Captain America, Jackson will star alongside regular cast members Qiao Zhen Yu, Wu Ying Jie, and He Jiong in the show which uses classic crime cases to create a new genre of mystery variety shows. Jackson is no stranger to variety shows, having participated in both Korean and Chinese TV shows such as Go Fridge and Weekly Idol.

The episode is expected to last between 60 to 70 minutes long, and consist of a mixture of variety show fun, intelligent debate and twisting plots. We are really looking forward to watching Jackson Wang this Sunday 5th June at 20.00(CST). Tune in!