JYJ Tops List: Group Japanese Women Want to Give Chocolates to The Most

JYJ Tops List: Group Japanese Women Want to Give Chocolates to The Most

C-jes Entertainment‘s JYJ might be getting a lot of chocolates on the upcoming Valentine’s Day.

According to Mpost, a Japanese site dedicated to Korean Wave, 1,000 female Japanese fans from ages 10 to 70 chose JYJ as the group that they would want to give chocolates to on Valentine’s Day. According to the poll results, JYJ got 71.6 % of the total votes.

In a similar poll that asked for individual group members instead of a group in whole, Kim Jae Joong, Kim Junsu and Park Yoo Chun promptly took over the top three ranks in order, proving JYJ was indeed the most popular Korean male group in Japan. 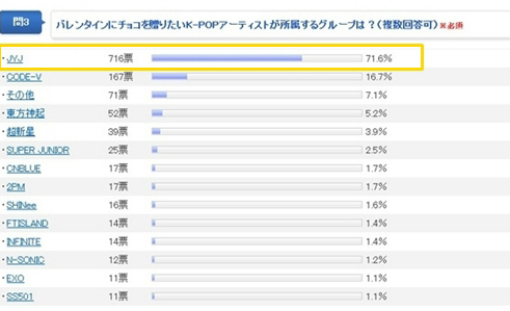 Code-V landed in second place behind JYJ, while TVXQ (DBSK) was at no. 3. Super Junior, Supernova, 2pm, SHINee, FTIsland, CN Blue, Infinite, and EXO can also be found on the list.

The site reported, “It′s a complete win on the part of JYJ. That the group managed to retain this much popularity even without promotions in Japan is extraordinary.”