K-EXCLUSIVE: 24K made history and dream come true in Prague

K-EXCLUSIVE: 24K made history and dream come true in Prague

On 9th August 2018, a historical milestone has been created in the chronicle of K-pop in Czech Republic as well as in the hearts of all local fans. Despite the fact that Czech Republic is located in the middle of Europe and its capital city – Prague, is a well-known touristic spot for Korean visitors, no K-pop group has decided to come to this place for a full solo concert. For years, the local fans wished to welcome a K-pop group in this country. Their wishes has been finally heard when 24K announced they will be coming to Prague for a concert. And by doing so, the group not only made a history in Czech, but they also thrilled all the fans as 24K is one of the most popular K-Pop groups in Czech and Slovak.

Hundreds of fans waited for hours in the scorching heat of 37 Celsius, yet once they have entered the venue they welcomed the boys by screams so loud the boys were taken aback. And not only the group was surprised by the high volume. The fans shocked themselves as well, but that only gave them more energy to show their love even louder. The building was shaking hard under the loud fanchants for the whole duration of the concert. We could tell the venue staff members were also stunned by the incredible welcome the fans gave to the boys.

Even the MC of the night, Cory, admitted it himself by saying: “Hey, what is up, Prague?… Were are we? This is crazy! I haven´t got this kind of energy is such a small space in such a long time, so it´s… it is bizarre.”

When the group introduced themselves, some of the members incorporated a few Czech phrases into their introduction, making the fans cry in happiness upon hearing the familiar words said by their idols. It was especially Changsun who received the biggest response. He purposely made the crowd go a bit quiet so that his introduction is heard by everyone. He started by saying: “Ahoj! [“Hi” in Czech language]…” The response from the fans was thunderous, yet he wanted to hear them more. “Okay, okay. Again?… AHOJ! I am Changsun of 24K…  It is out first time being here, so I want to make sure we have a really good night tonight. … We have just started, but you already made it memorable. Thank you guys for being so supportive! Děkuji [“Thank you” in Czech language]!”

Jeonguk then continued by expressing his wish to fulfill the fans´ expectations: “I was very worried because it is our first time here, but I am very happy for the turnout… We just found out during the fansign… one of our great fans here gave us a little plaque saying that we are the first K-pop group in Czech. I want to make sure that we fulfill your wishes and that this (concert) will represent something great for you. I want to make sure this is a memorable night for you which you will not forget.” To that, the fans cheered loudly to show they are truly thankful to their favorite group for coming. 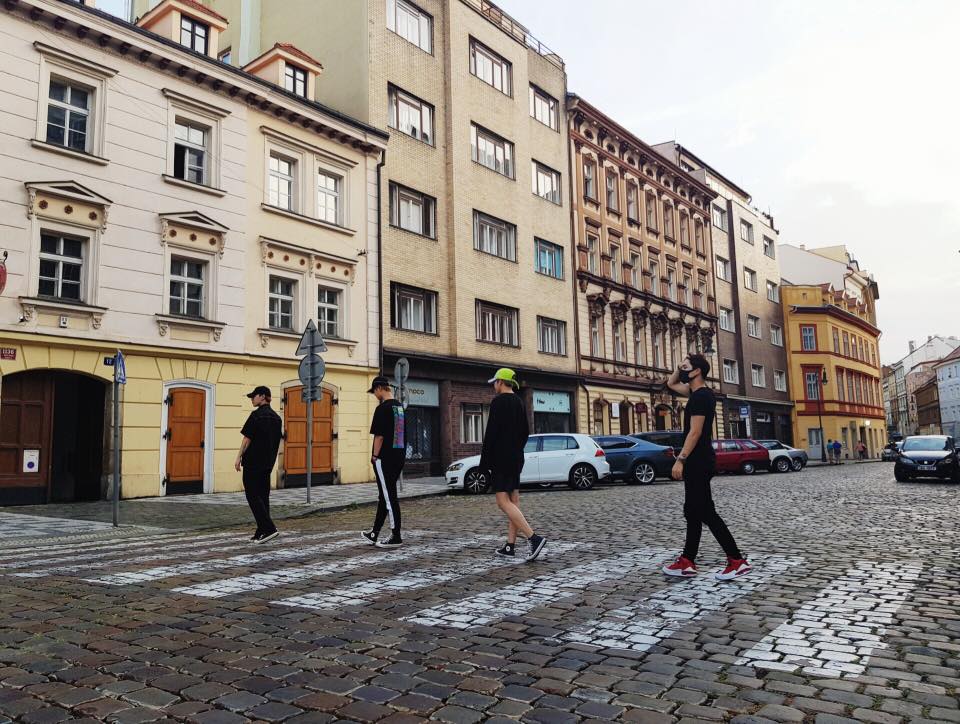 When Jinhong introduced himself, he started with the Czech greeting “Ahoj!” and then continued in English only: “First, today my feeling and condition is so great, because yesterday I ate Czech steak and I walked in Czech street… so today my feeling is good.”  He then expressed his wish the night is as exciting for the fans as it is for him.

It was time for the newest member, Kiyong, to speak. The fans chanted so loudly for him that the boys had to wait for a long time before Kiyong could introduce himself. The fans were just so energetic while giving him their best welcome yet. Once Kiyong got the change to speak he shared: “It is our first time in Czech Republic.  There are so many beautiful sights to see and I am very excited we came to such a beautiful place. I am even more excited because there are so many beautiful people in here.”

“We were looking for something beautiful, but it was right here,” Hongseob added and pointed to the crowds. “We are going to make you go so crazy that you will not be able to walk away today.” He then ended his talk with a cute “Thank you!” which made the fans scream in a loud response upon seeing his cute aegyo.

Cory then ended the introduction of the members by his own: “I am Cory. I feel like you did a lot of screaming for the intro of this show. We are very honored to be here, so excited to see you guys… what is more important is that you guys have a crazy time tonight, all right? You guys are ready to go crazy, right? We are not talking about quiet night, we are not talking about all right night, we are talking about a crazy night!” Fans could not respond louder to his words. Cory then introduced Hongseob as the new MC for the next song and Hongseob welcomed everyone in a deep tone in English: “Ladies and gentlemen! Welcome to the 24K show! The next stage is very hot, because next song is our new song. Do you want to see the next stage?!…” He proceed in teaching the fans how to scream to his question more passionately, but it was obvious the fans are giving it their all when the guys could not even be heard over their voices.

The concert was filled with surprising moments from beginning till the very end. Not only the fans welcomed the group with an inconceivably force, but also the boys gave the fans many unexpected gifts.

During the song ‘Honestly‘ the screens and sound suddenly froze and the boys were left with no accompaniment for the stage. The fans started chanting “24K! 24K! 24K!” hard to cheer them up, but it took some time for the technical issue to be solved. The boys did not wait and started singing the song acapella with the help of the fans. It was a very memorable moment as the fans showed their love and support instantly and the boys performed the song on spot with ease. When the screens issue was resolved, they performed the song again, but from what we heard the fans are reminiscing about their breathtaking acapella a lot.

The boys went down to the fans a few times. First it was Jeonguk who went to sing in front of the fans during the song ‘Honestly‘, then all of them sung off stage for ‘Our block‘, giving the fans direct feels from this up-beat song. 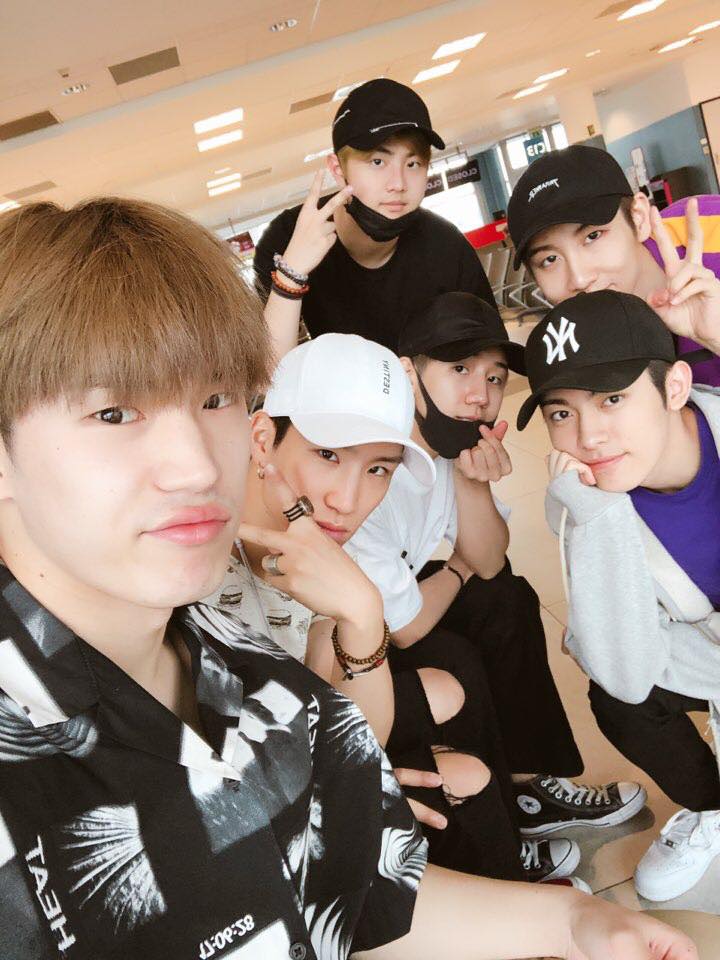 One of the members, Kisu, could not participate in this year´s European tour, but he still prepared a surprise for his fans. Once all members were backstage, the screen showed Kisu, greeting the fans and wishing they enjoy the concert to the fullest. The greeting video then continued by Kisu singing “To. For  You” in English which melted fans´ hearts away.

The boys also decided to give the fans some souvenirs as well and so at one part of the concert they were throwing balls with their signatures into the crowds. It was a very nice and thoughtful surprise for all as even the fans who did not get a place right in front of the stage were able to get something from the guys directly.

We also have to mention the surprise project the fans prepared for the group for their last ment. The hundreds of fans hold up banners saying “Prague? B-I-N-G-O!” showing that the group made the right choice for picking Czech for the concert as well as hinting to 24K´s song “Bingo”.

And we cannot leave out the ending when fans were graced by the view of shirtless Jeonguk. It was at the end of the show, so everyone went a bit crazy, splashing water on the fans, giving them a few more minutes to jump and scream at the top of their lungs. Before the group left the stage completely they all screamed “Miluji tě” which means “I love you!” in Czech, leaving the fans loving them even more.

The group prepared “Q and A” segment, answering questions given by the Czech fans prior the show. The interactions between the group and the fans were really awesome during this segment as the group reacted quickly to the fans´ requests and additional questions.

To a question what their favorite k-drama is, Jinhong and Changsun acted out a famous scene from the drama “Guardian” while the fans sung “Beautiful day” by Crush.

One of the questions asked “What would you do if you see one of your fans crying?” It was Hongseob and Jeonguk who acted out this scene. Jeonguk was pretending to be crying while Hongseob tried to calm him down. While Hongseob was comforting Jeonguk, he not only patted his shoulder, but his bottom as well. The fans went crazy while seeing them, but Jeonguk protested it is not proper to pat their fans like this and so Hongseob and Jinhong have acted out the scene again, this time keeping in mind that it shall be a scene between them and their female fan.

Probably the most memorable part of this segment was Jinhong acting out food. First he pretended to be a steak and banana. Then, with the help of other members, Jinhong acted out a pineapple. It took everyone a lot of imagination to see the desired food in Jinhong´s recreation. 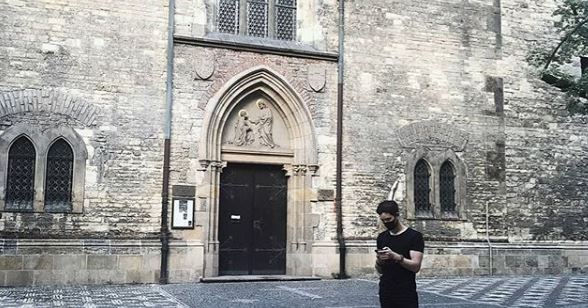 The concert´s set list was filled with 24K´s most loved songs as well as their newest tracks. Fans could jam into unit rap and hip hop performances, they went insane together with the guys during ‘Our block‘, they made the crowd fanchant to the fullest for ‘Still 24K‘ or scream while performing the sexy version of ‘Been you‘. The group performed ‘Blue‘ as well as ‘Superfly‘ or ‘Hey you‘, and of course did not leave out their newest title track ‘Bonnie and Clyde‘ – the original version and also a remix version. And there was still one more surprise they added to the list of songs – 24K performed a cover of ‘Ddu-du ddu-du‘ by Blackpink, making the fans totally lose it.

The whole concert was filled with incredible dose of love and support from the fans and perfect, heartwarming and professional performances from the group. We are sure the fans enjoyed their very first K-pop concert in Czech to the fullest and believe the boys of 24K were in love with the response their fans showed during their concert. The show was mainly attended by people who knew 24K previously, but we could tell that every single fan was leaving the venue with “24U” written in their hearts that night.

We were truly honored to be a part of this concert experience, the first of its kind in Czech, and wish the group a successful continuation of their European tour! Our fingers are also crossed for Czech fans for more breathtaking shows like this in their country!

Scroll for more
Tap
K-EXCLUSIVE: Check out our exclusive interview with Dok2 and The Quiett during their first Australian tour!
K-EXCLUSIVE: Wanna One World Tour “ONE: THE WORLD” In Singapore
Scroll
Loading Comments...