K-EXCLUSIVE: Block B Sets The House On Fire In Budapest

K-EXCLUSIVE: Block B Sets The House On Fire In Budapest

The members of Block B returned to show their love for fans in Europe once again with their ‘2017 LIVE BLOCKBUSTER IN EUROPE‘ tour. Just like in 2015, MyMusicTaste helped fans make their dreams come true by bringing the group to five cities. We were able to see the boys live in Budapest, Hungary. 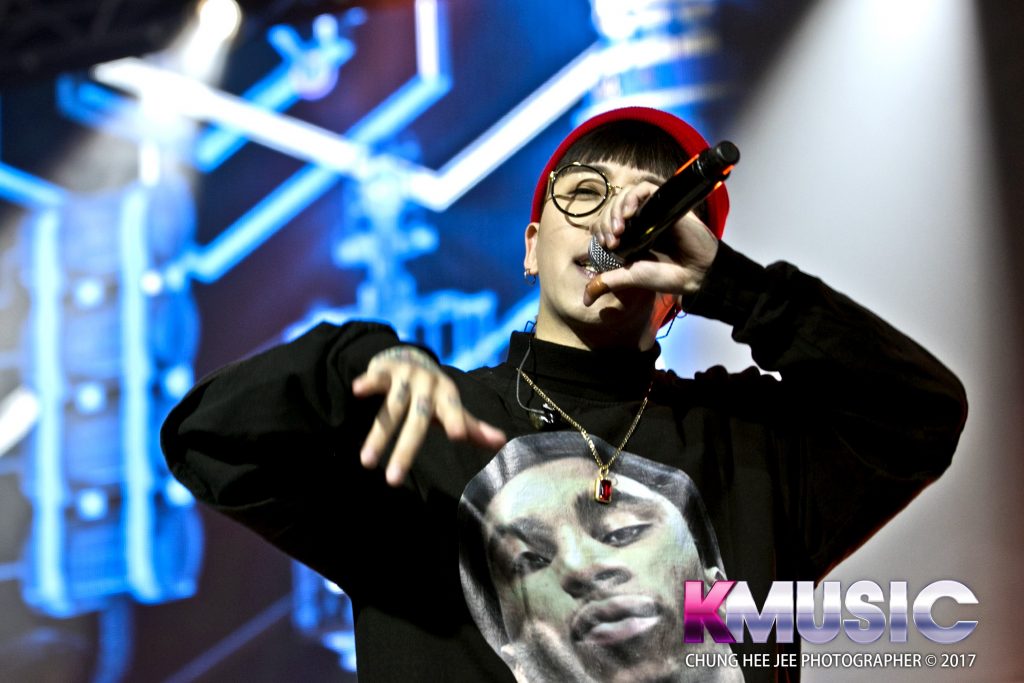 Hungarian BBC haven’t got a chance yet to see Block B perform, so news about the tour made them really excited and happy. They came up with multiple fanprojects, started learning fanchants months ahead and waited for their favorite group excitedly. Budapest was the fourth stop of the tour, scheduled for the 3rd March. Even though it was a Friday, fans were gathering from early in the morning in front of the venue, getting their numbers for queuing, divided to match all the different ticket types. Thanks to the slightly warm weather, fans could enjoy themselves, chatting with each other, making new friends from all around Europe. At 10 A.M fans got unfortunate news from Block B’s official Facebook page. They announced that member P.O can’t participate in the Budapest and London shows due to health issues. Even if fans were disappointed, nobody made a scene, they were understanding and supporting, heading to the post and leaving encouraging messages for P.O, wishing him a fast recovery. 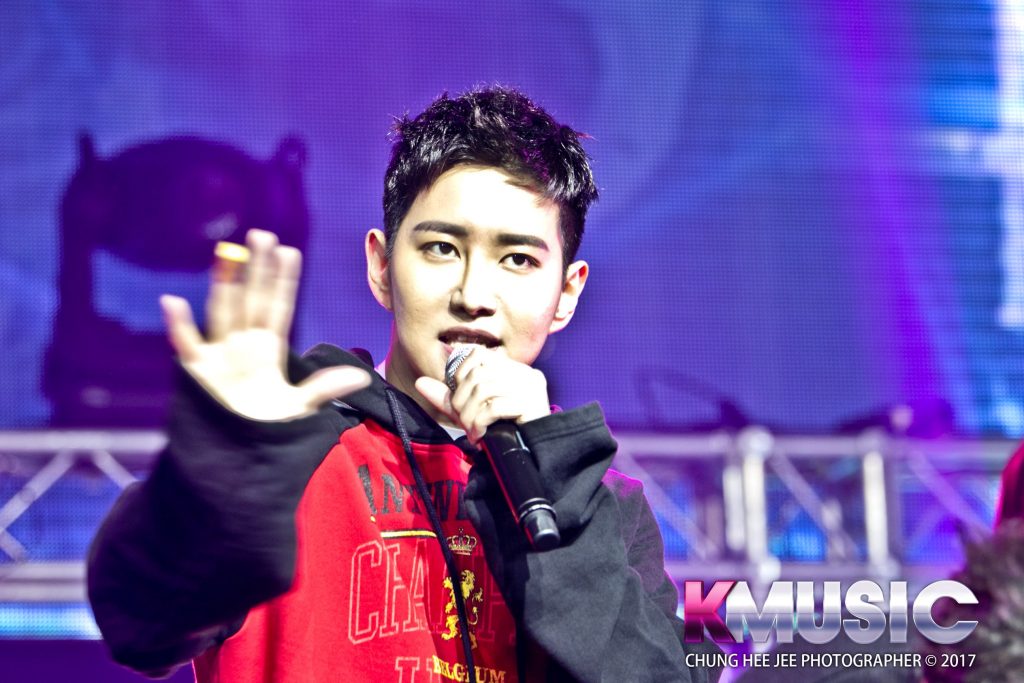 The gates were opened at 6 P.M, while the show only started at 7:30. In the meantime fans were waiting patiently, singing along with Block B’s biggest hit songs which were played as background music. Perfectly in time then, lights went off and a really eye-catching, dynamic video was played, making the fans scream in excitement as their patience to see the boys reached the limit. The moment when the members stepped on the stage, the crowd was as loud as a sonic boom. Fans greeted their idols with great passion and happiness. Block B started the show with their song ‘Nice Day‘, showing off their playful personality from the beginning. Even though P.O wasn’t there, the rest of the members gave their all to make a good start, performed with great energy. After a short greeting they continued on with ‘Her‘, followed by U-Kwon making the fans sing before the song ‘Mental Breaker‘ and ‘Action‘. 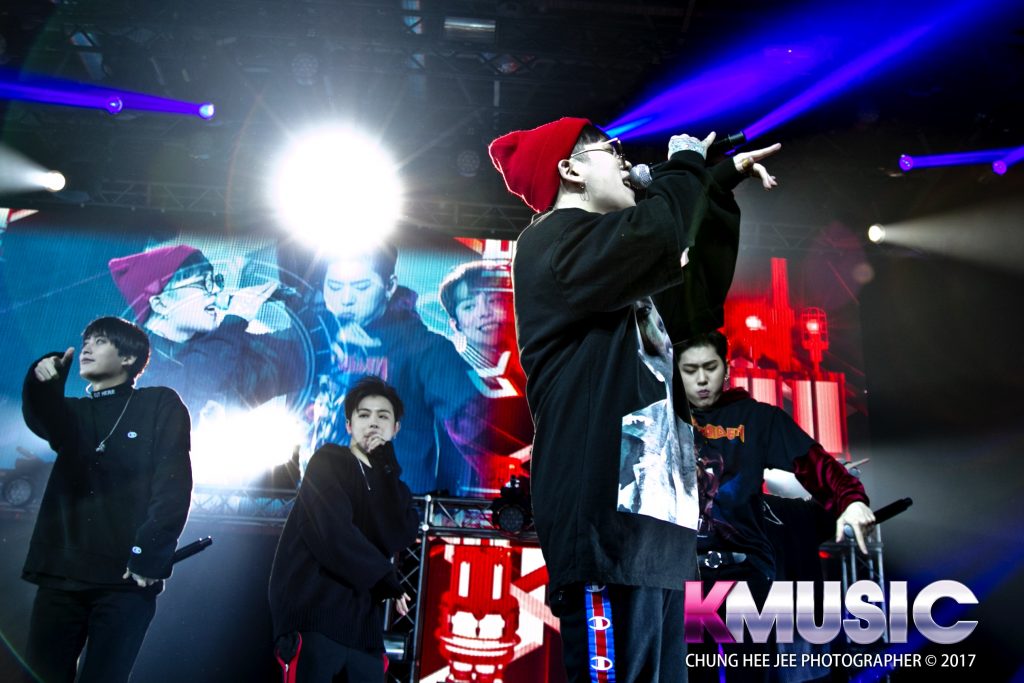 After the first few songs, members greeted their fans again, giving a short introduction. The fact that all of them were speaking in English was already impressive, but they could really make the fans’ heart beat faster when they started saying Hungarian words, such as “szia” (hi), “köszi” (thank you), and “szeretlek” (I love you). The latter was said by Kyung and fans reacted with such a cheerful ovation that had hall shivering from their voice. Coming up, the members were talking about what they were told about Hungarian fans, how they are really cheerful, bringing the widest smiles on BBC’s faces. Zico finished talking time with a really powerful sentence, saying: “Show will be on fire, show will be tight, show will be very good“. As he finished talking, fans cheering was so loud it was hard to hear the first notes of ‘Very Good‘, one of their biggest hits ever, that made fans jump and dance crazily. Up next was ‘Be The Light‘, a song really anticipated by fans as they could make one of their project happen, while singing along with the boys, they held up banners saying ‘I’m your light‘, bringing a warm, touched smile on the members’ faces. 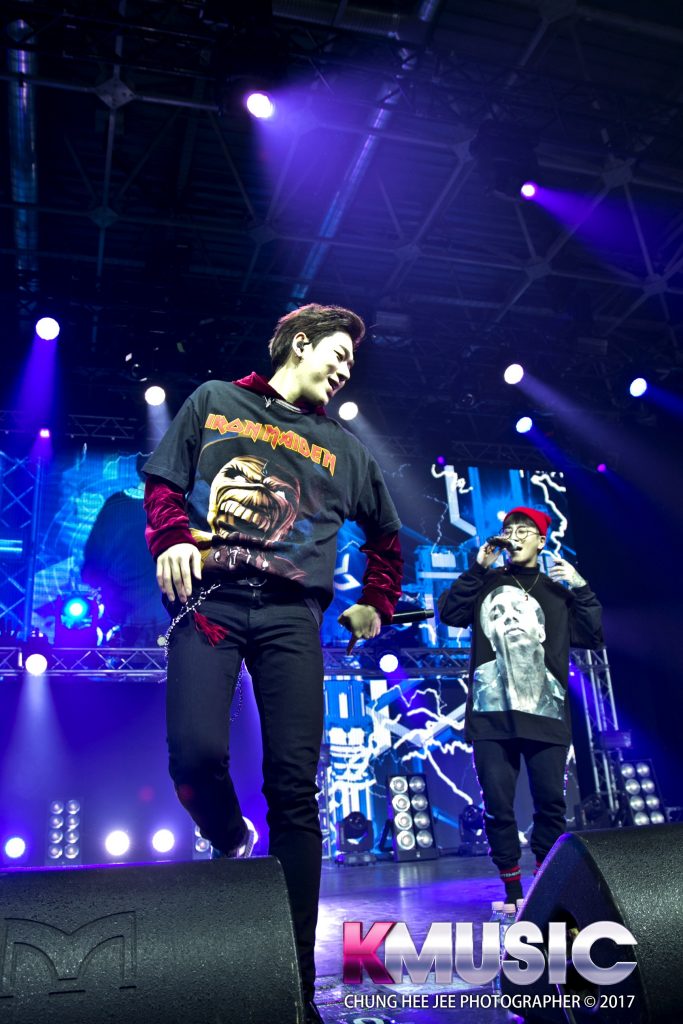 Taking a short break, the boys stepped back on stage and sat on chairs as Jaehyo took on the role of a reporter, asking the members how did they spend the previous day in Budapest. Fans were much impressed once again as the boys were talking about famous monuments and spots in Budapest, followed by Hungarian dishes with pretty accurate pronounciation, their faces – especially Taeil‘s – showing how proud they are of themselves. Everyone burst out in laughter when B-Bomb mentioned Hungary’s most famous drink “pálinka” as well. Following Jaehyo’s interview, Block B performed two of their slower songs again, ‘Did You or Did You Not‘ and ‘Romantically‘. Fans were singing along yet again, waving their hands, some of them wiping away tears. Zico managed to surprise them again by saying “szép” (pretty) a bunch of times while pointing at girls during the intro of ‘Romantically’. 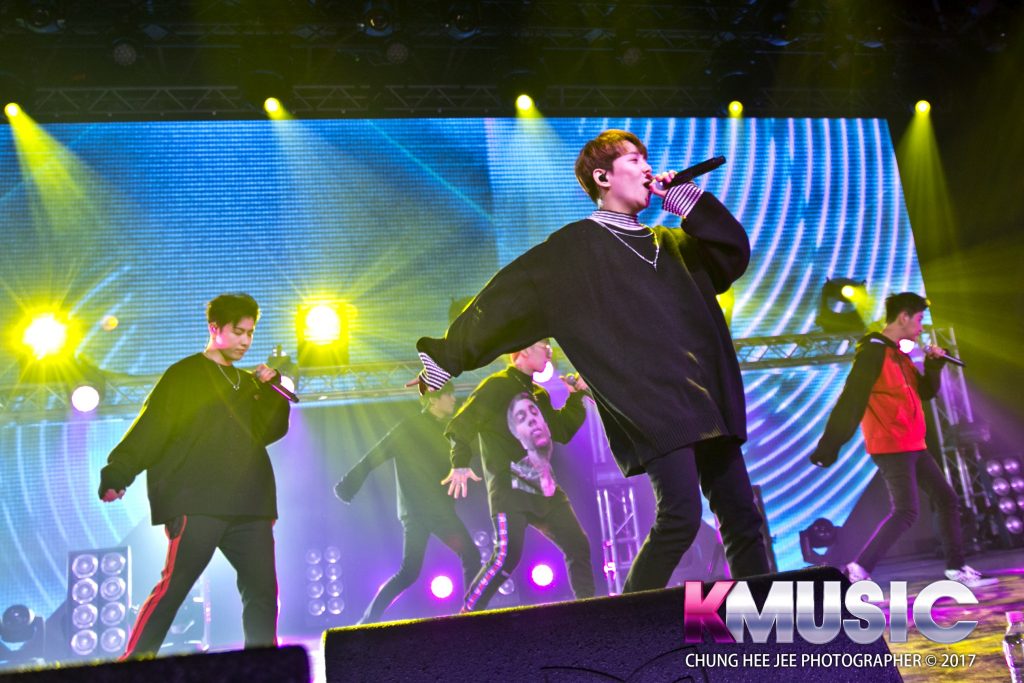 While the boys left the stage to take a break, fans could enjoy watching a video called ‘Block B in Modern Times‘, showing the members in funny costumes with mustaches as they were in a workshop, either pretending to do their job diligently, repairing all sorts of things, or being lazy, while Zico was running around scolding or encouraging them. The video was followed by the really popular song ‘Zero for Conduct‘ originally performed by Bastarz (U-Kwon, B-Bomb and P.O). This time since P.O was missing, Zico took up his part. Fans were energized by the song, screaming the lyrics hard. Some of them even doing the dance moves for the chorus part! 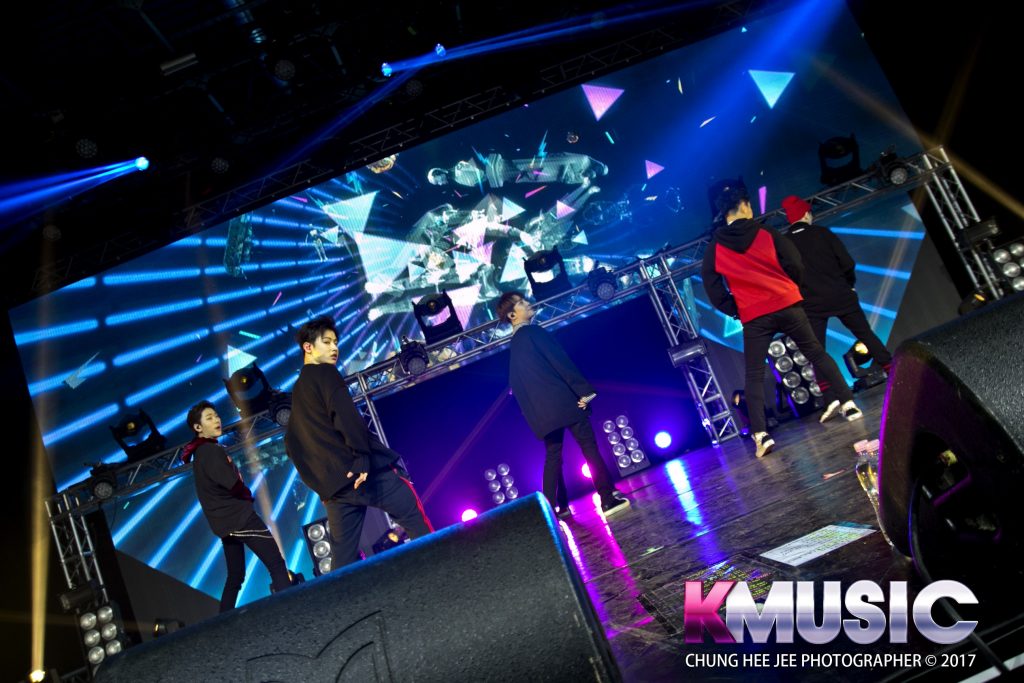 After this dynamic song, a video of dolls in a factory was shown while playing the background music of Block B’s song ‘Toy‘. Fans were singing together in harmony, as they did so when the boys came back to the stage to perform the same song and the following one, ‘Walking in the Rain‘ as well. The members then had another talking session, mentioning how they were pleasantly surprised to see a good number of male fans, and praising the crowd for their actions. They said they’ve heard that Hungarians were really passionate, but the response from fans during the show was still unexpectedly strong and astonishing, leading BBC to scream of joy and pride because of those comments. For the next block, fans proved that they could still raise the volume of their voice as they were cheering even louder during the songs ‘Unordinary Girl‘, ‘Jackpot‘ and ‘Tell Them‘. 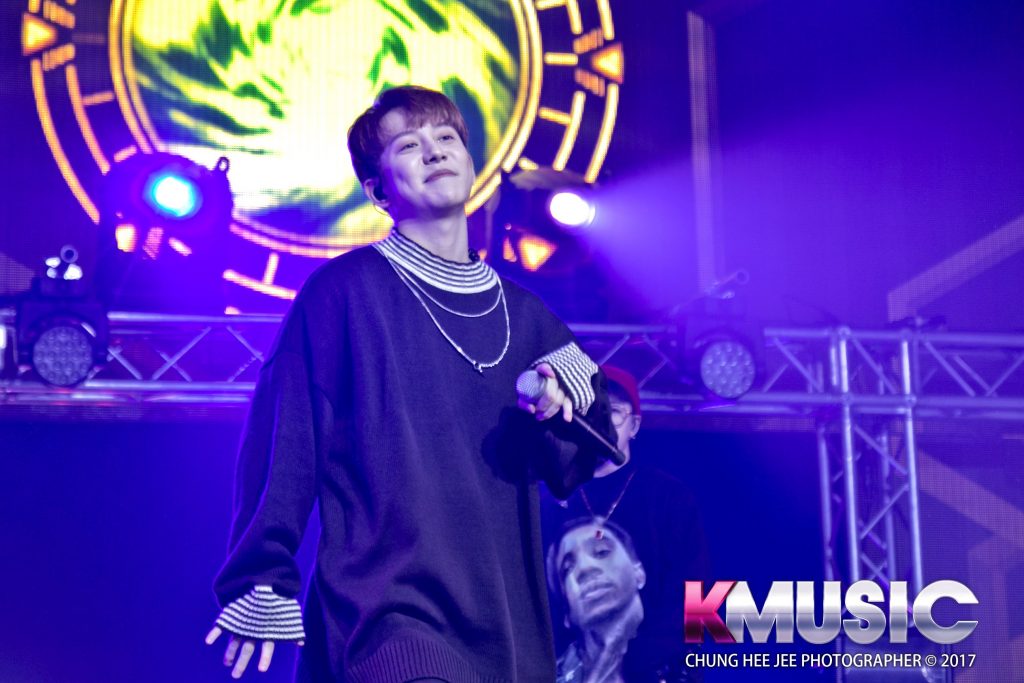 Yet another break and the boys were back with a different expression on their faces. This time they looked touched and a bit more serious as they started talking about their feelings of the concert and their thoughts on the tour, thanking the fans for cheering and for loving them, promising to come back again. As they announced it’s time for the last few songs, fans’ faces showed disappointment, thus Zico tried to lighten up the mood by starting to sing some lines of his solo songs, letting the fans continue them. Time came to perform their latest song ‘Yesterday‘ which came out not long before the tour, followed by ‘Nalina‘ and ‘Very Good (Rough Version)‘. With these songs, they turned the hall into a big party, making the fans go crazy once again. It could be seen on the boys’ faces how much they enjoyed being on stage and giving their all, they were playing around, laugh at each other, Zico dropping his mic and U-Kwon shouting “louder” in Hungarian to fire up the fans. For the fans’ biggest surprise, during performing ‘Very Good’, Zico left the stage to appear down in front of the first row, running up and down, giving high-fives to fans and making them scream louder and louder. 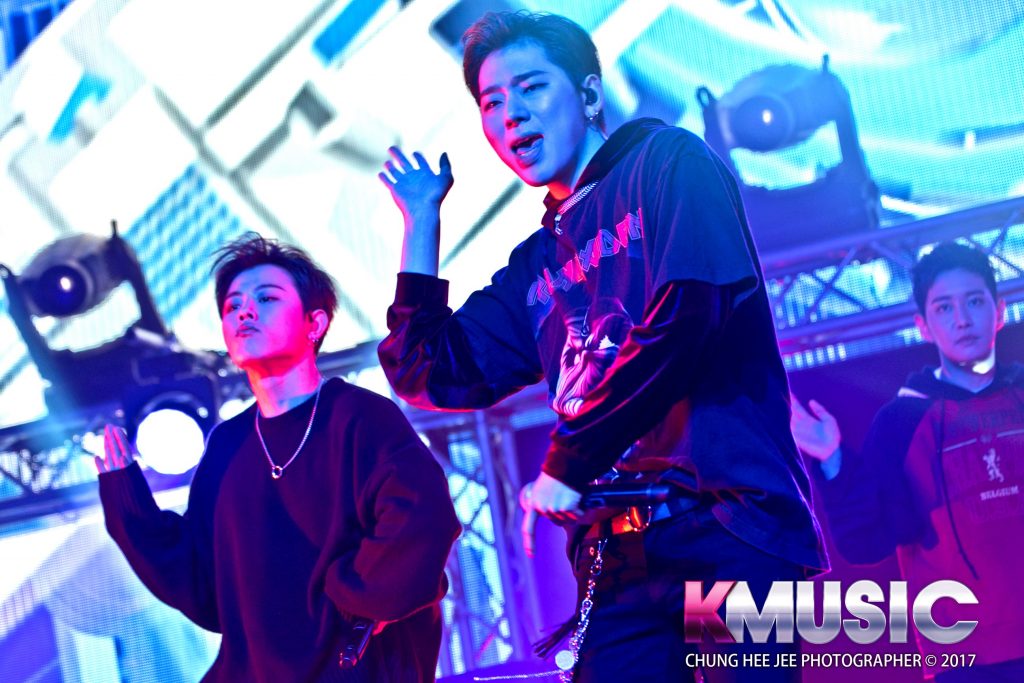 Right after Block B left the stage, fans were shouting out for an encore, calling back their boys on stage. A video appeared on the screen showing childhood photos of the members, melting the hearts of all the fans. Then the members came back to the stage one by one while singing ‘A Few Years Later‘. The last song was ‘Movie’s Over‘, the boys recieved flags signed by fans and took a photo with it. The show ended with a storm of confetti, Block B shouting “thank you” and “I love you” in Hungarian to the fans, even singing to the last remaining notes “I love you Budapest” and leaving the stage. 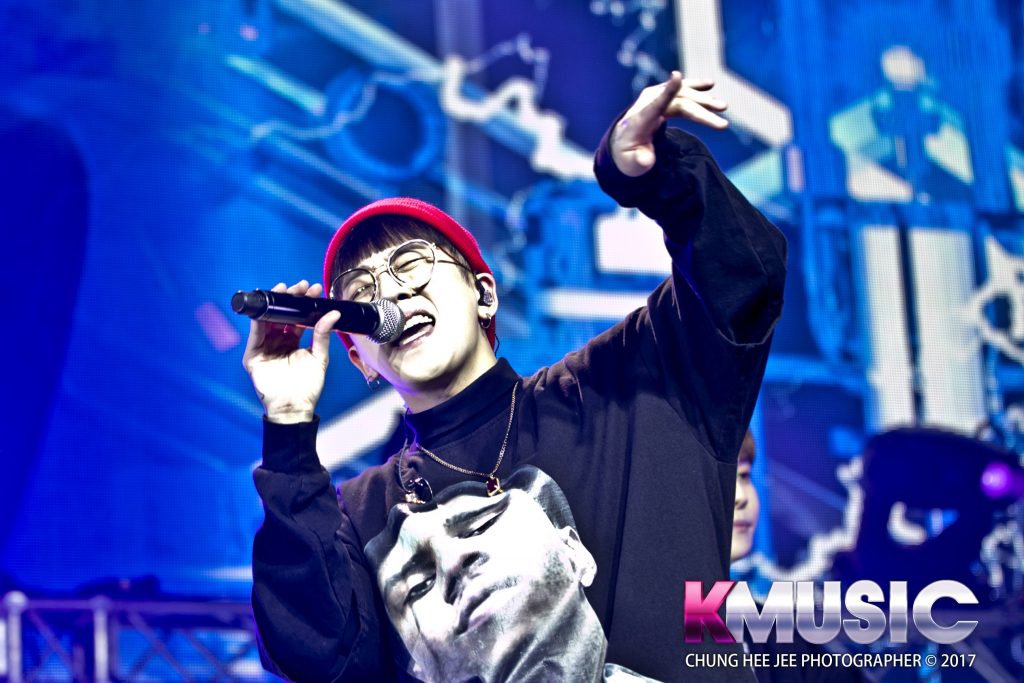 After the show Type A ticket owners got their chance for a High-Five event and taking a group photo with Block B.
Even though P.O couldn’t attend, what must’ve made the rest of the members worried, they really performed with all of their energy, showing their true personality and giving their fans an unforgettable night.

We would like to thank My Music Taste for bringing Block B to European fans and giving us the opportunity to cover the Budapest stop for Kmusic readers!

Check out the full album of photos taken at the concert!