On Friday 3rd of November 2017, the local press met up with Park Seo Jun ahead of his fan meet which happened at Resort World Sentosa the following day. The press conference was held at Intercontinental Hotel where the rising 28-year-old heartthrob was asked some questions and had a taste of Singapore’s delicacies. Here are some of his confessions at the press conference. 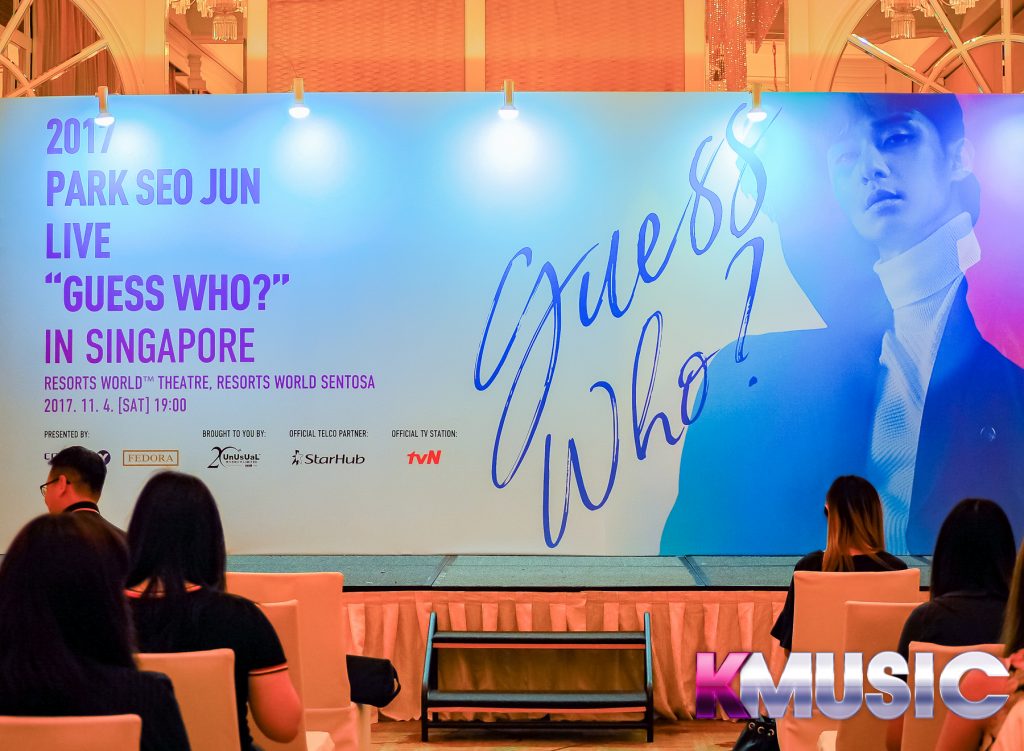 On his Bromance with fellow co-stars Lee Kwang Soo and Kang Ha Neul:

“I am really thankful that I had a chance to work with Kang Ha Neul and Lee Kwang Soo. They are really good people and I still keep in contact with them and because of the fact that I had a good time doing projects with them, so I feel that the results were great.”

The star adds that he hopes his friendship with his fellow actors will remain forever. Following Kang Ha Neul’s recent visit to Singapore to promote ‘Midnight Runners‘, they promised to catch up in Korea when Kang Ha Neul finish his enlistment in the army. 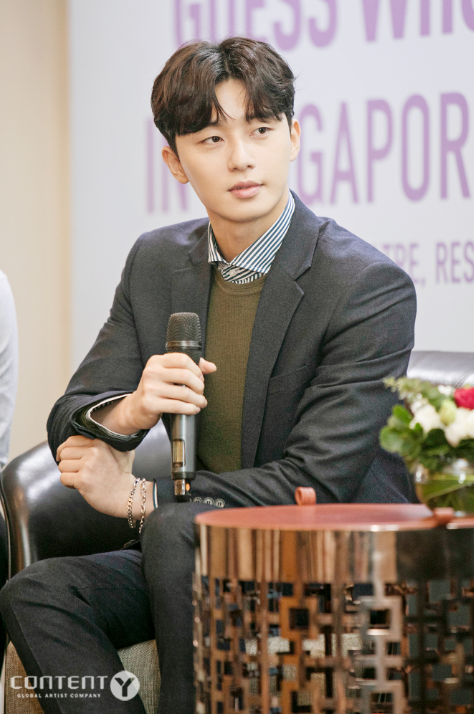 “I don’t have any special preparations for these scenes. Basically, I try to put myself in the character’s shoes and when I do that well, good scenes are made.”

Adding on that he is a very shy person in real life, Park Seo Jun tries to put those thoughts aside while filming his projects. Park Seo Jun stars in many romantic comedy such as ‘She was Pretty‘, ‘Kill Me, Heal Me‘ and his latest drama ‘Fight For My Way (2017)‘ where he falls in love with his longtime best friend, while struggling to succeed in his career of being a nameless MMA fighter and love life. 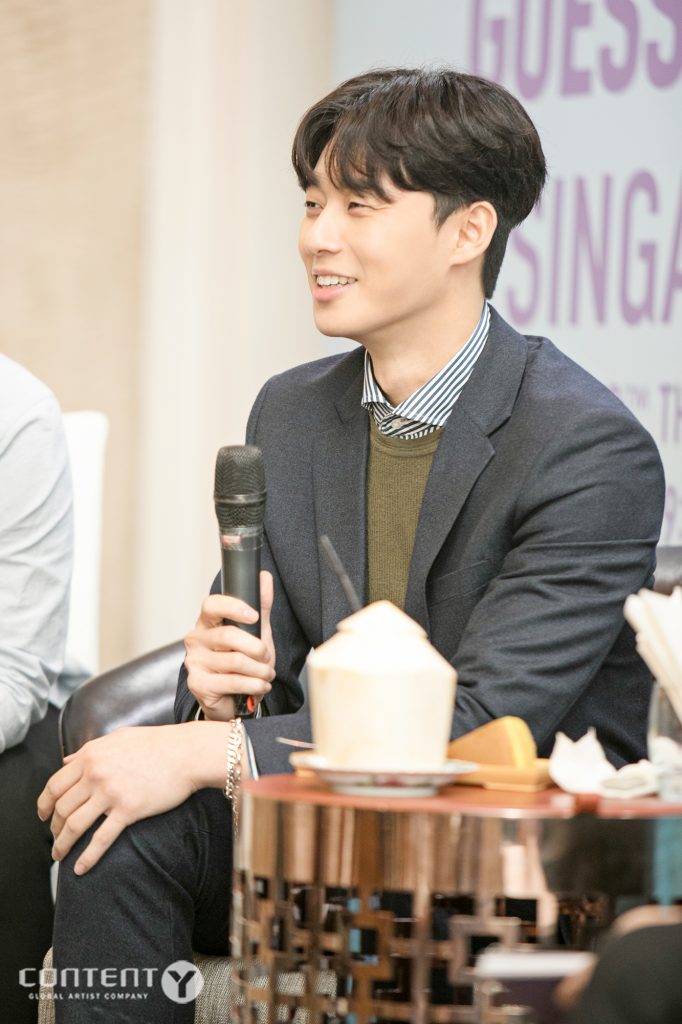 “It is really honourable that Midnight Runners was a great hit. There is no movie that our staffs and actors don’t put in the effort. So, all the movies are made in a sense that with the effort that is put in, it is really an honour that audience picked our movie as a great hit.”

‘Midnight Runners‘ is a 2017 South Korean action comedy starring Park Seo Jun and Kang Ha Neul, about two Korean National Police University students, who witness an abduction and decide to embark on their own amateur investigation, which gets them into all sorts of hilarious trouble. He added that he didn’t felt much pressure and tried to enjoy the filming process. 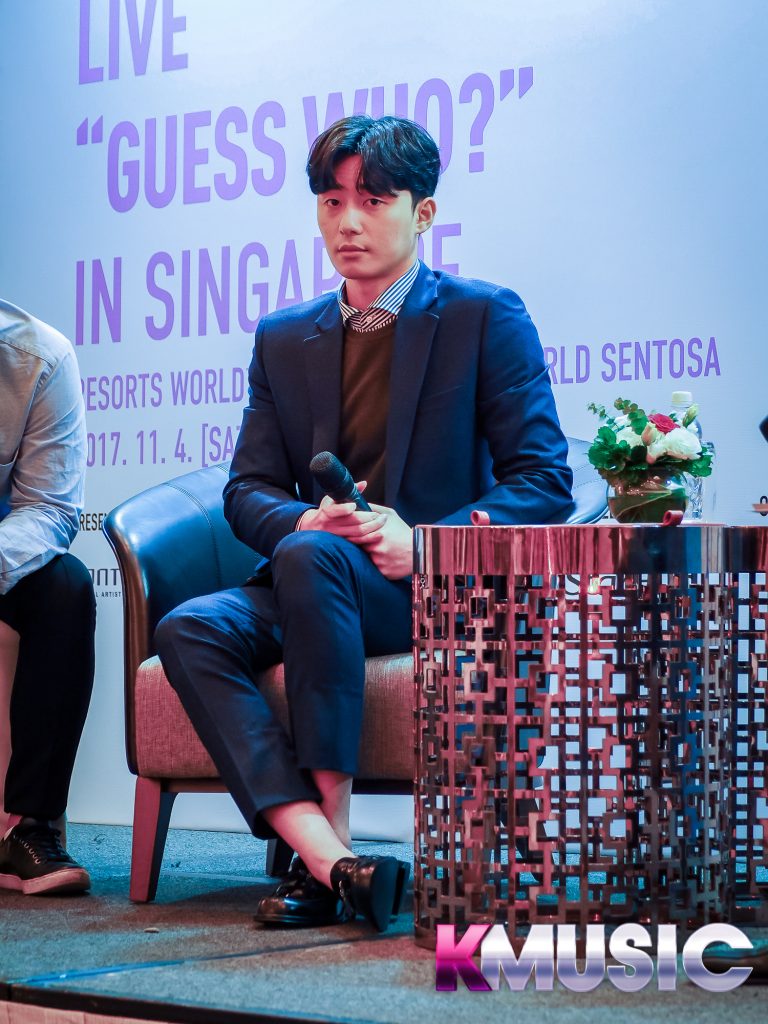 On having a dual personality as a weakness for being reserved at home and behaving differently when around friends:

“Instead of trying to overcome it, I try to accept it as who I am. At first, I thought that this was a weakness, but the thing is, as times goes by, I don’t feel it is anymore.”

He feels that it is now a strength instead. Thinking twice before he speaks brings more weight hence more meaning. 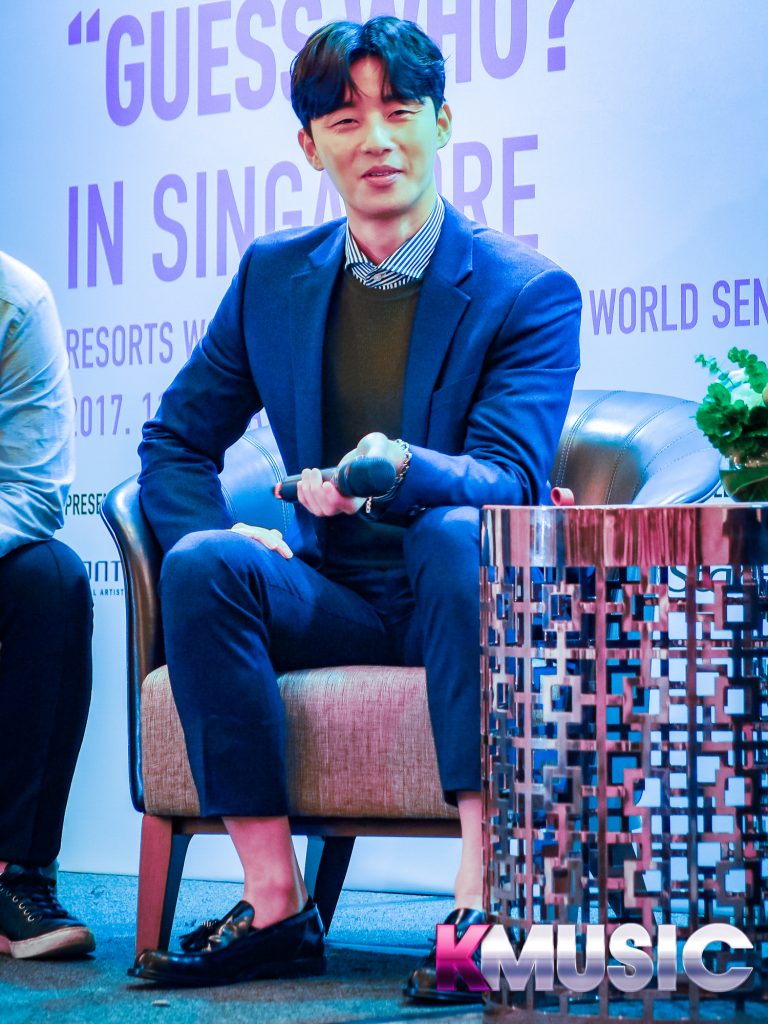 On his leadership qualities with friends and colleagues:

“I feel they come from times I can’t avoid; – towards my juniors. And as a main actor, I feel there is much responsibility on me.” 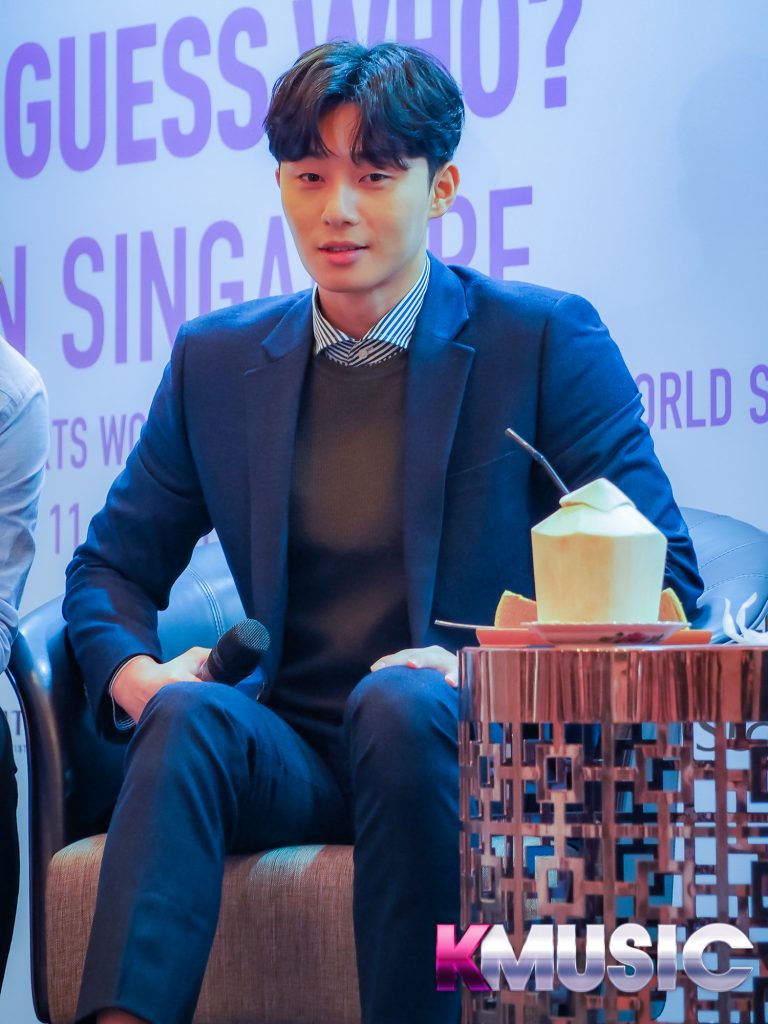 On the inspiration behind his childhood dream to become a baseball player:

“It is really nothing special, I really enjoyed watching baseball. So, I thought it would be good if I can be a baseball player.”

On whether he still plays baseball:

“My body doesn’t work the way it used to be so I don’t really play baseball nowadays.”

On his appeal of being “Nation’s Boyfriend”:

Returning the question to the floor, “His Smile!” was the response from Singapore Media Fans. Humbly, he flashed a shy smile, and everyone present was awed.

As Singapore is well known for its good food, to our pleasant surprise, Park Seo Jun shared that he’s even tried the King of Fruits, Durian! Trying some Singapore’s delicacies at the press conference, “Shiok!” he repeated after the host after tasting the Pandan Cake. “I usually enjoy coconut juice in packets when in Korea. It is good for Hangovers,” he added after trying the fresh coconut juice. 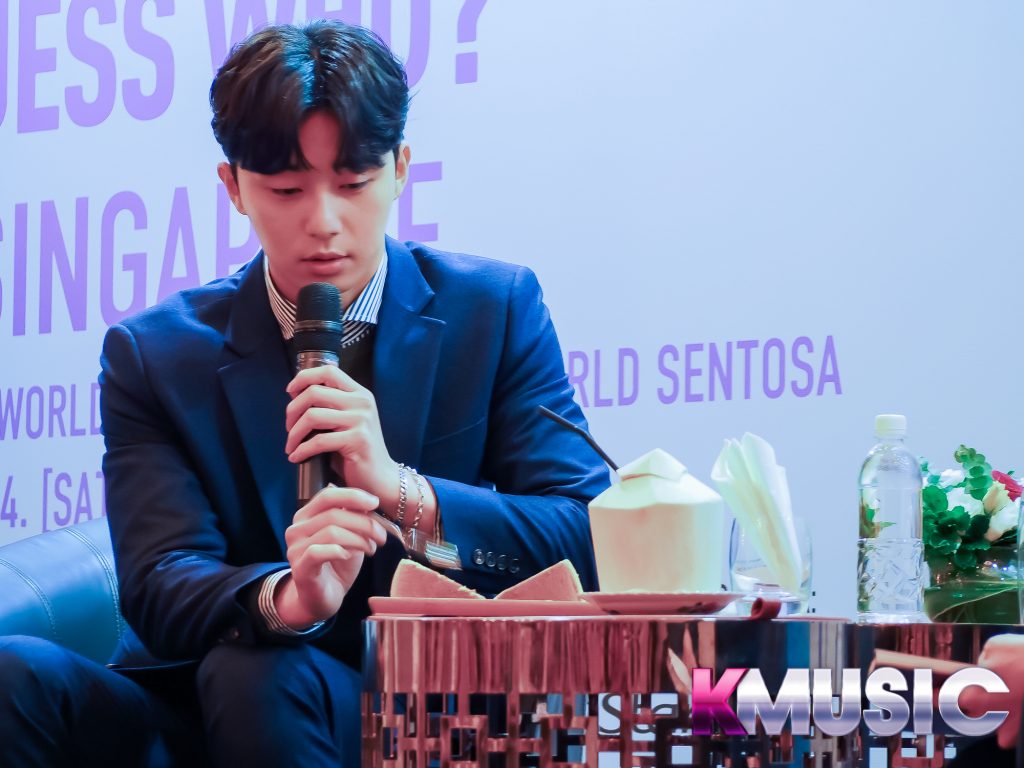 On being a cake person:

“I love cakes, but it’s one of the foods I sacrifice for my exercises.”

On one item he can’t travel without:

“Portable Speaker. Instead of being completely quiet, I can feel different things with different music.”

“I don’t have anything specific in mind right now. But I will try his best to find a good project to show you guys more of Park Seo Jun. Not just 2018 but for the future as well.” 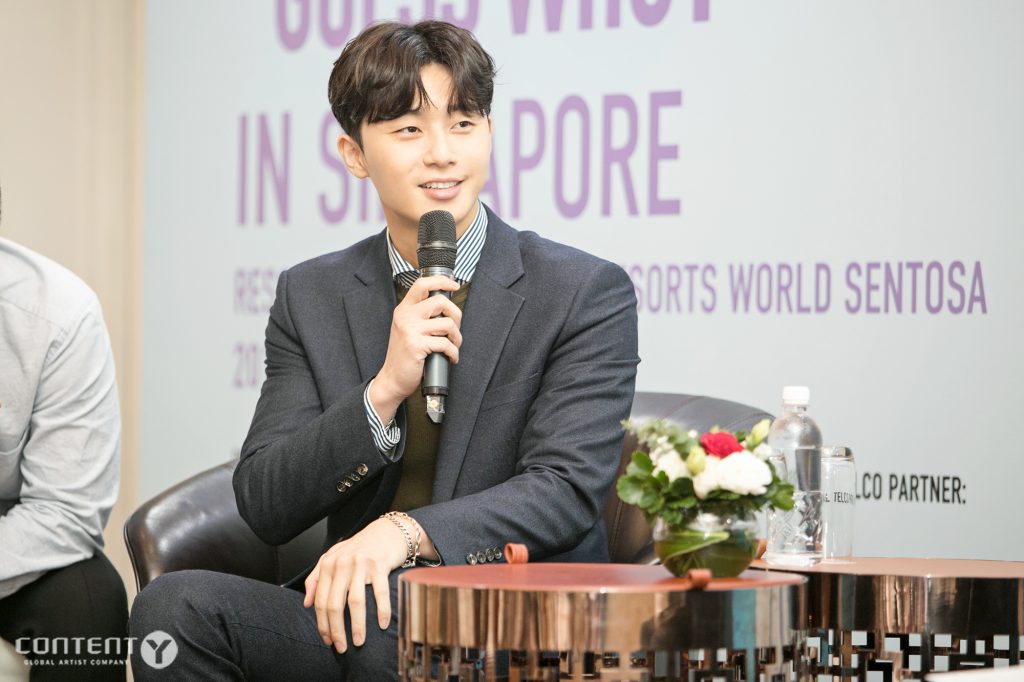 Not only will fans get to hear Park Seo Jun sing and share snippets of his work and life during his Park Seo Jun ‘GUESS WHO?‘ live in Singapore 2017, there will also be segments for them to get up close with Park Seo Jun during the goodbye Hi-Touch session.

We would like to thank Unusual Entertainment for the media invite.

Officially Kmusic will bring you exclusive updates on the event, so stay tuned!

Edited by: Daya and Tracey