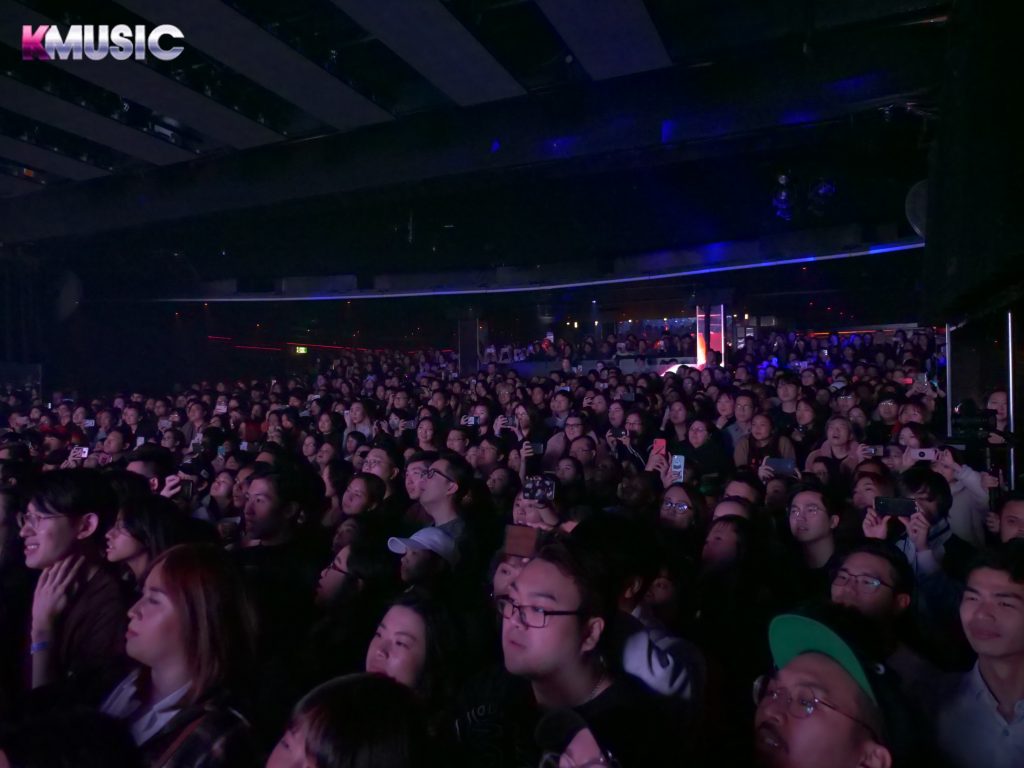 It was definitely an “Epik” night at Epik High’s first night of their Australian tour! They kicked off their tour in Melbourne Australia and it was a night to remember. This marks the first time Epik High has graced us with a concert in Australia and we have been anticipating it! This is how it went down: 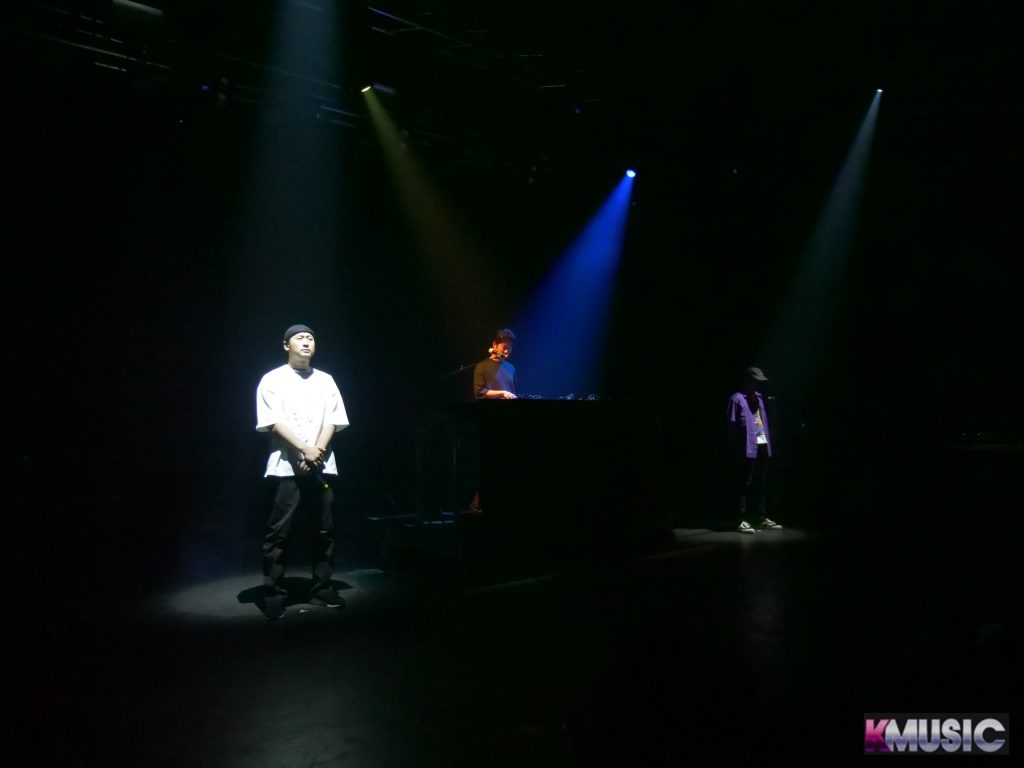 Doors opened at Melbourne’s 170 Russell venue at 6pm AEST, and before you know it the venue is completely filled from back to front for the sold out show! It was a very anxious one-hour wait. There was classical music playing in the background which really suited Epik High’s scene. As the music fades and the lights go off, the crowd goes wild. 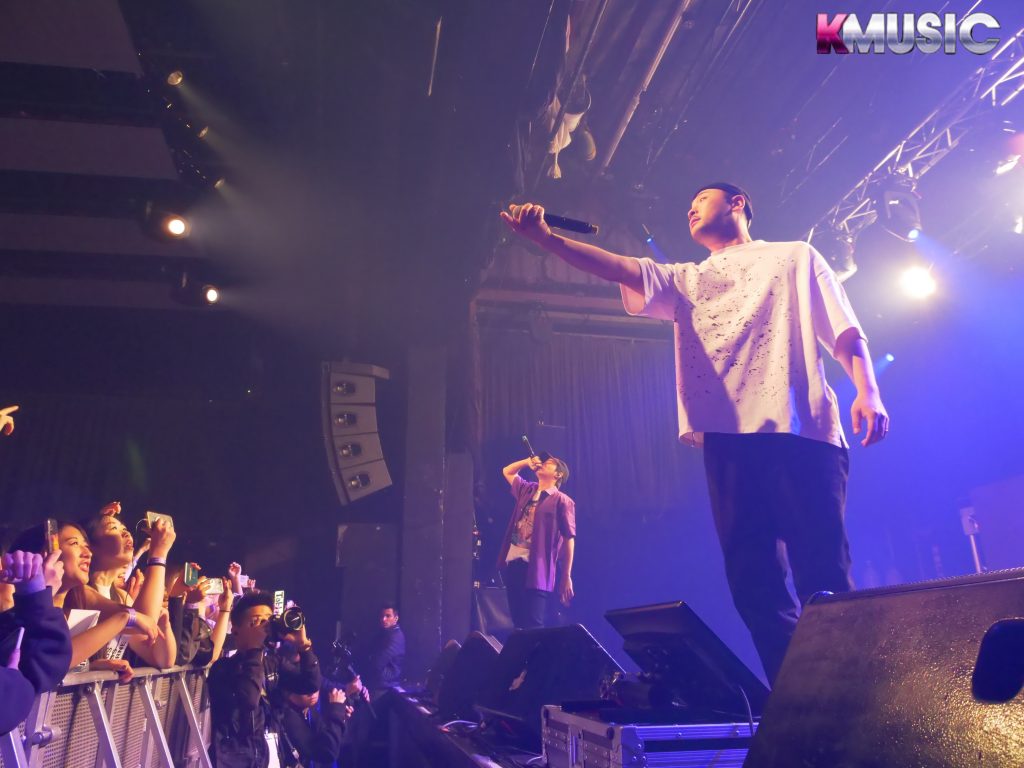 To begin the show, the screen comes on with a short intro film of the members. It then turns into lyrics to their song ‘Be’, that plays along to the song. The lights then go off suddenly and Dj Tukutz, Mithra Jin and Tablo then appear in the midst of the stage as everyone goes crazy! 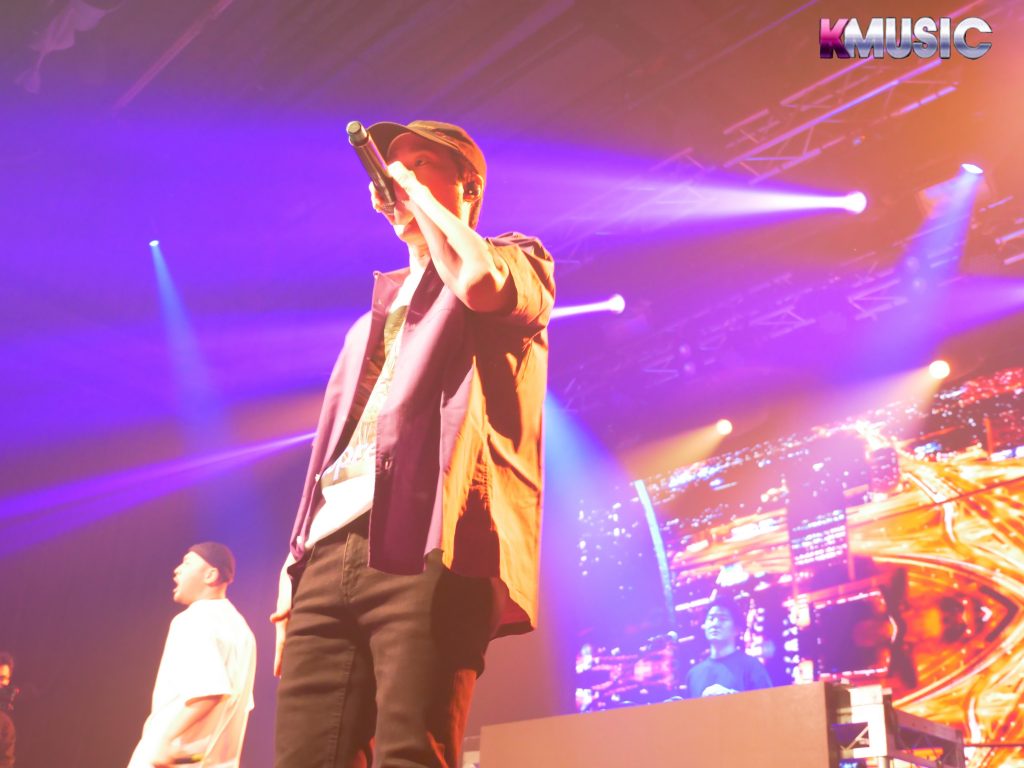 “All of Melbourne Make Some Noise” says Tablo as ‘In Seoul’ begins! The crowd’s energy suddenly synchronises with Epik High waving their hands up and down along with the group! 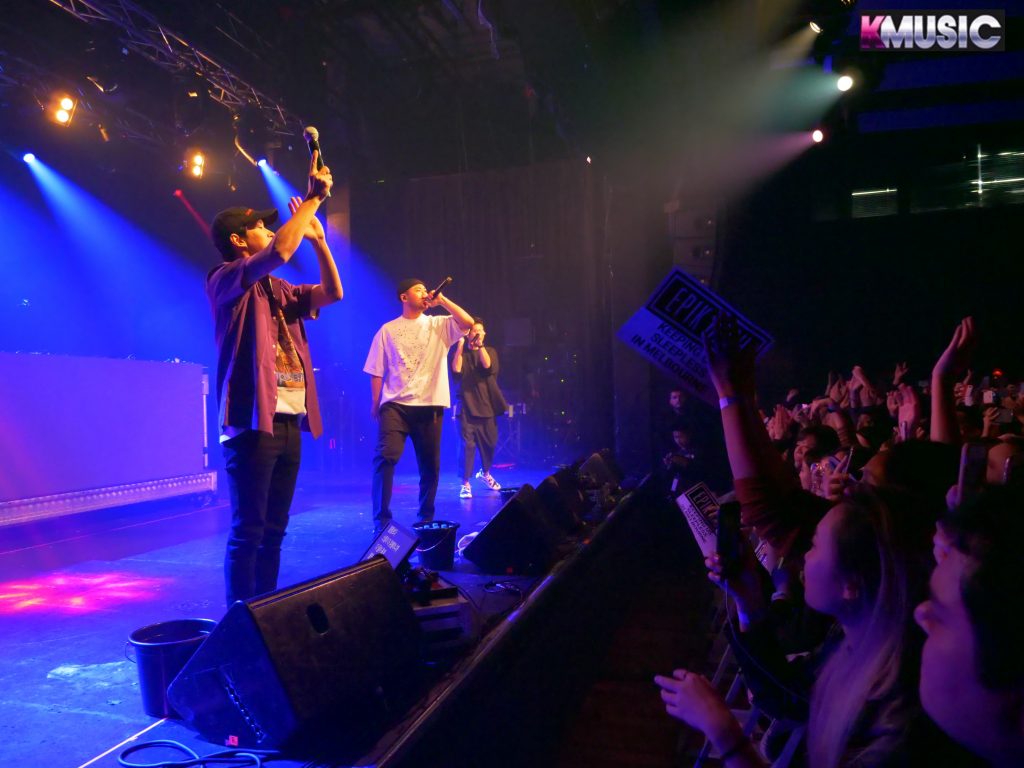 Each member then gets to introduce themselves as Tablo does most of the speaking in English and has us usually in tears of laughter making jokes constantly. The members even couldn’t contain themselves at times!

Epik High makes it rain and the crowd’s energy is through the roof! 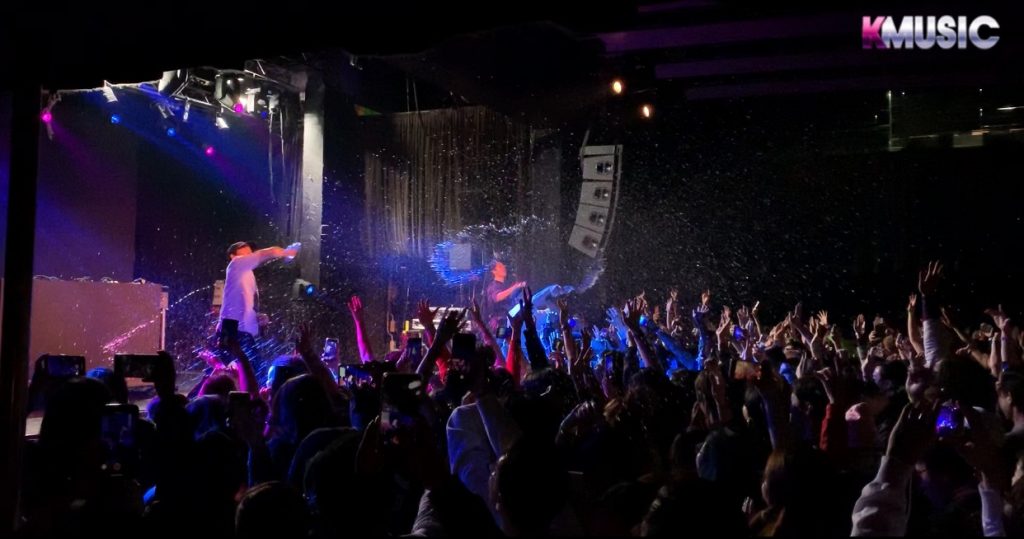 “This is our first time here in Melbourne Australia, and it won’t be our last”, the words of Tablo has the crowd the loudest so far! The members kick off the next part of their performances with their hits ‘No Thanxxx’ and ‘Burj Khalifa’. Throughout the performances every chance the members of Epik High get to pick up a water bottle, best believe as that beat drops they made it rain all over the audience and it did nothing but hype everyone up more! This is especially true during their songs ‘Kill This Love’, ‘High Technology’, ‘One’ and ‘New Beautiful’! 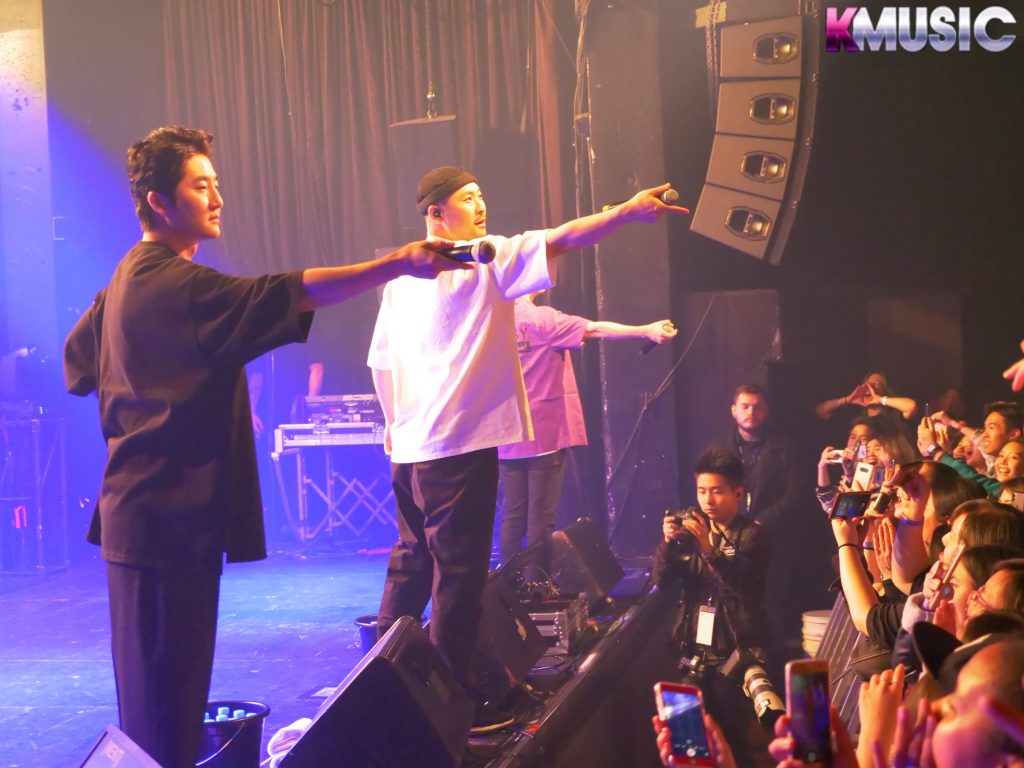 The members also took it down a notch after asking the crowd if they enjoyed and loved their latest album ‘Sleepless In_____’. They started off with ‘Eternal Sunshine’ and also performed songs ‘Love Love Love’, ‘Happy Ending’, ‘One Minute One Second’ and ‘Love Drunk’.

In between sets Tablo would have the crowd going with his speeches. DJ Tukutz was Tablo’s first victim target as he joked about how his facial expressions is very minimal but he remains the same through all emotions and that he is so happy even though you can’t tell. But don’t worry – by that performance we could feel the love from DJ Tukutz all around the room! 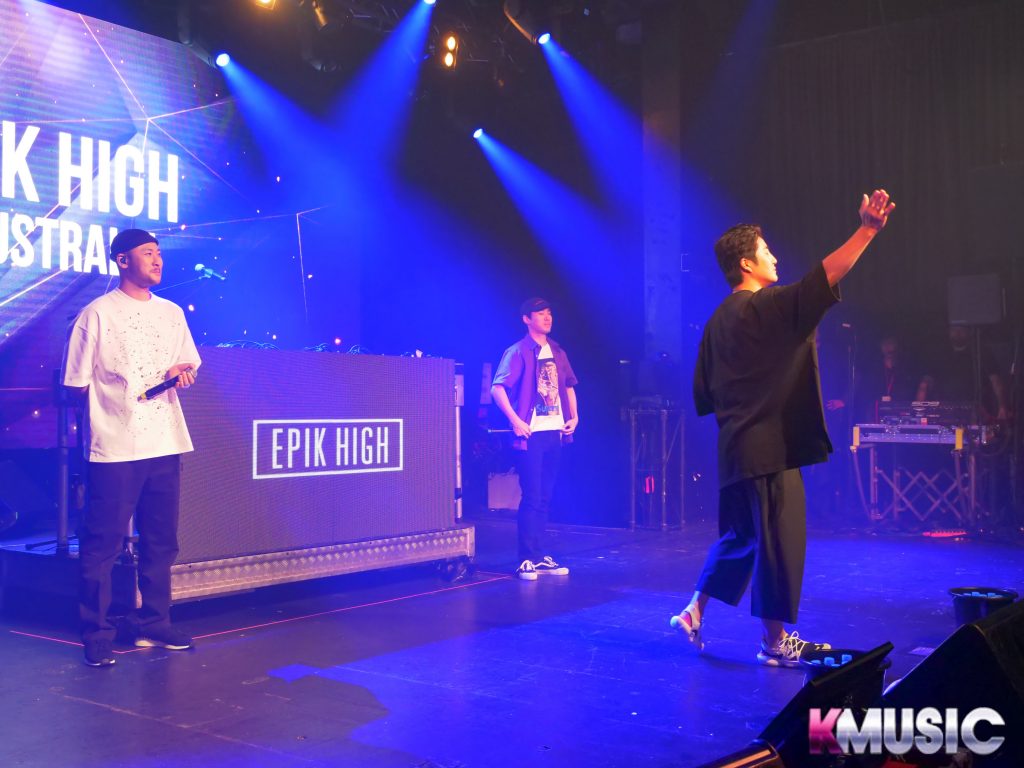 Dj Tukutz was also named by Tablo as the ‘Creator Of Kpop’! Never failing to make us laugh, later on Tablo went on to tell us a story about Mithra, about how Mithra has never experienced love until Tablo discovered him alone and unloved, cold and naked, in 2001 and explained how he clothed him and grew him to be where he is today, so now in Melbourne Australia he has found and felt the love he deserves! Dj Tukutz and Mithra did their best on sharing and showing their love and thanking us all throughout their speeches. 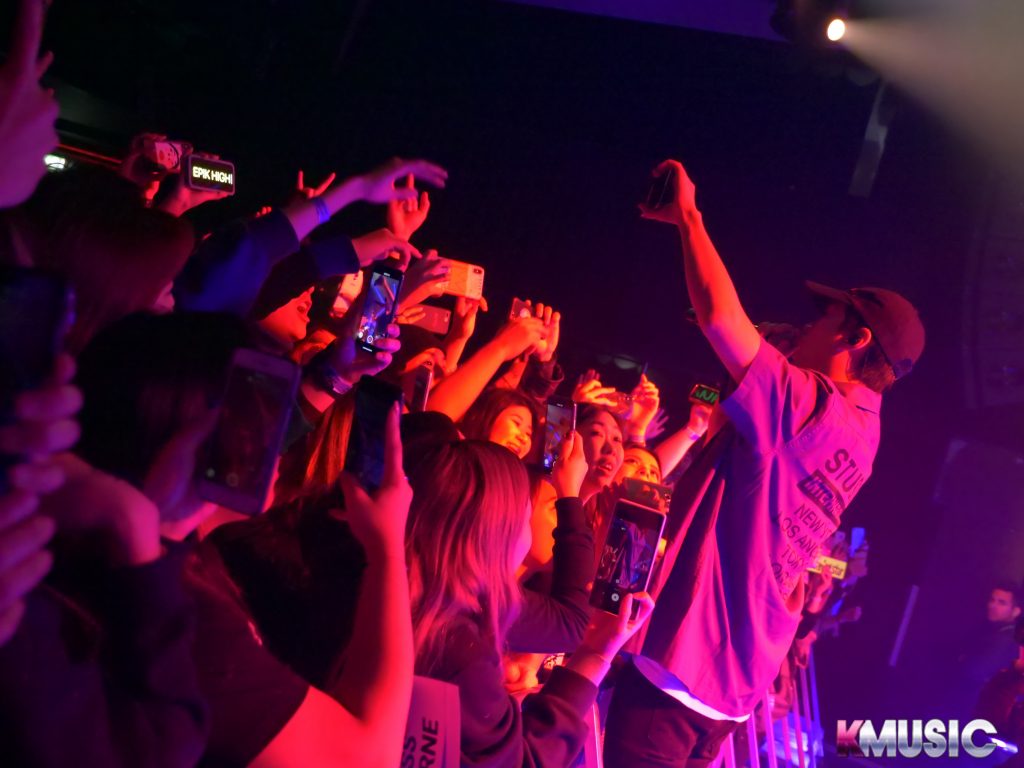 Throughout the performances the members interacted with fans a lot in the front row, spending a lot of time down in the crowd with them performing, taking fans phones and videoing themselves, taking selfies with fans and shaking their hands! The fans were overwhelmed with joy! 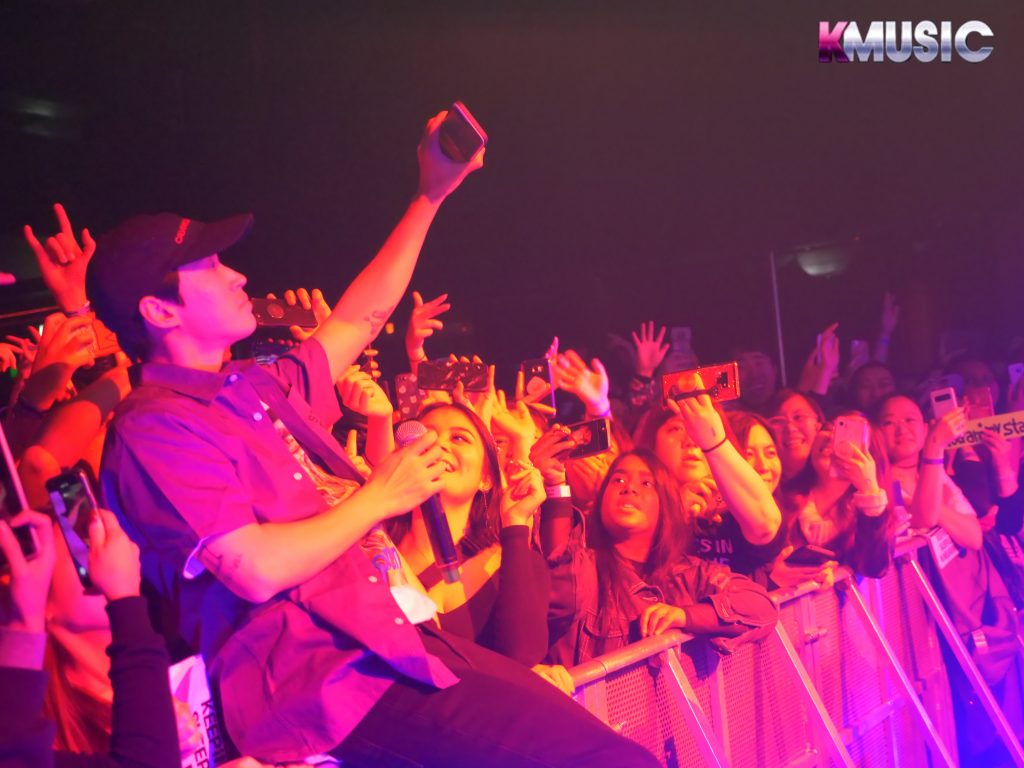 Wrapping up the show!

Even though Tablo insisted with a long speech about how they were not going to be “predictable” or like “any typical group”, and that they would sing their ‘final’ song ‘Fan’ and end it like that with no encore, but best believe they came out for us after exiting the stage dramatically. 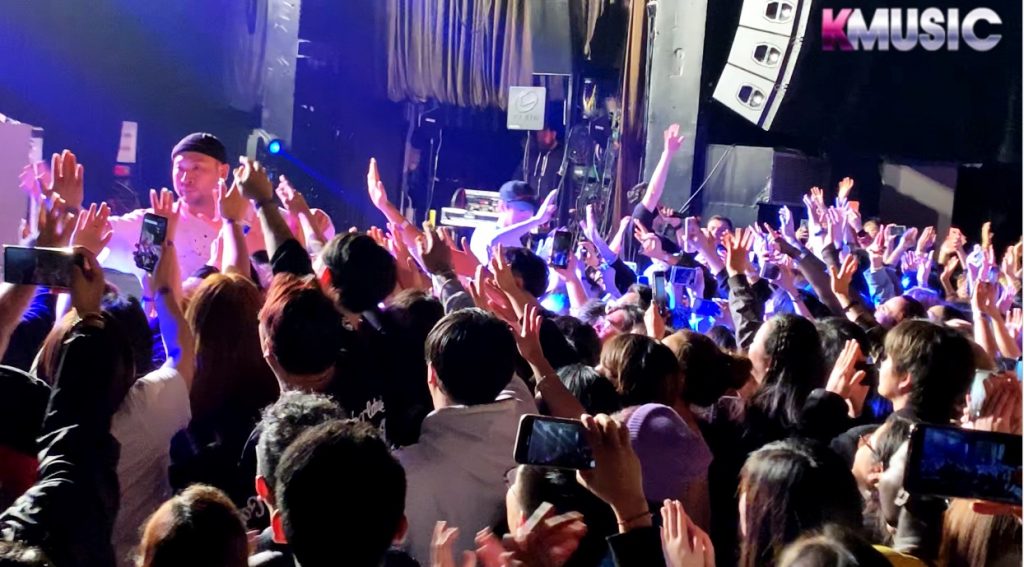 Dj Tukutz and Tablo came back out to us chanting “Encore” and performed ‘Born Hater’. After Tablo’s verse of the song, they cut the music and the members also had everyone looking their best whilst screaming on the top of their lungs for a group photo later posted by each member on their social media accounts.

The song restarted for Mithra’s verse but later stopped again for a special surprise! The members gathered a towel and wrote “We Love Melbourne” and autographed it one by one, Tablo even gifted us with a drawing of Mithra above his signature. Mithra chose the loudest part of the crowd to throw it to! The members all joined front and centre of the stage again and performed the actual final song of the night ‘Don’t Hate Me’ even taking it back by showing us their signature dance moves! 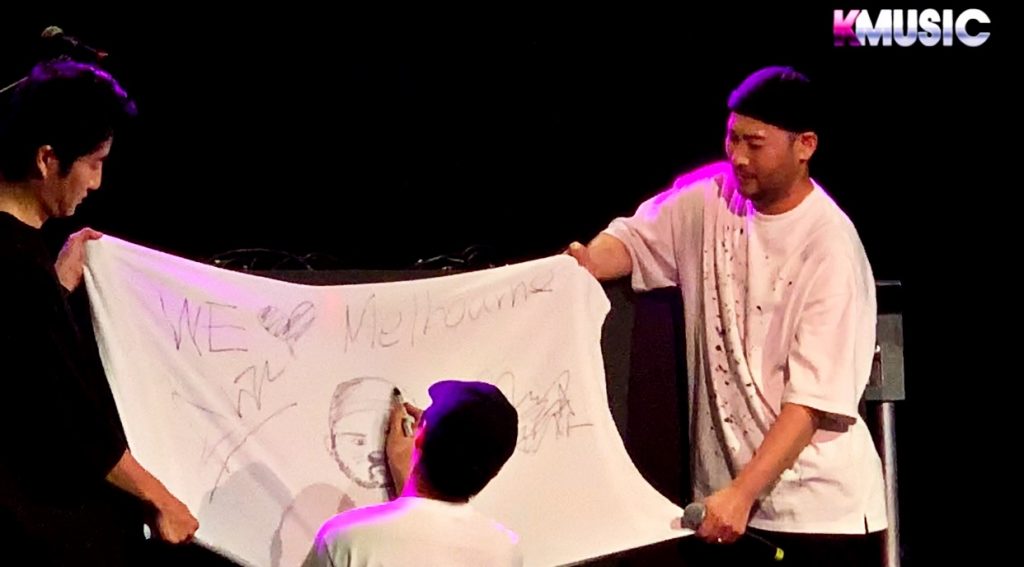 The Epik meet and greet!

After the show ended, the staff members cleared the venue and had all the meet and greet fans line up to meet the artists. In groups of 10 at a time, lucky fans got to meet the members of Epik High and take a photo. The members were very respectful and friendly. Dj Tukutz greeted each fan with a handshake and Mithra greeted fans also with a hug or handshake. Tablo turned into a social butterfly going around to each fan sparking a conversation or joke to keep them smiling. He also turned into a director telling everyone what to do for the photo and gathered whoever was needed for the photo. The members did their best to comfort emotional fans by keeping them laughing and doing their best poses! Tablo even ran over to say hi to the waiting fans before running back over to take photos. Fans left with more than a smile on their face and with precious moments to look back on.

After the meet and greet ended the members respectfully thanked everyone including the staff members and helpers. The members exited the building with big smiles, waving and bowing to waiting fans and Tablo was last to come out causally walking eating can salt and vinegar chips bowing to the crowd. It was definitely an ‘Epik’ night to remember!

Did you go to Epik High’s first stop in Melbourne Australia? What was your experience like? Let us know in the comments below!

Scroll for more
Tap
K-EXCLUSIVE: Find out all about NATURE’s exciting, catchy and vibrant song ‘I’m so pretty’ in chat with songwriter Claire Rodrigues Lee + special ‘clean’ teaser images of NATURE!
K-EXCLUSIVE: EPIK HIGH stir up the crowd and have fun in Sydney for their ‘Sleepless in’ Australia Tour!
Scroll
Loading Comments...