[K-Exclusive]: Falling in Love with WEi at First Sight 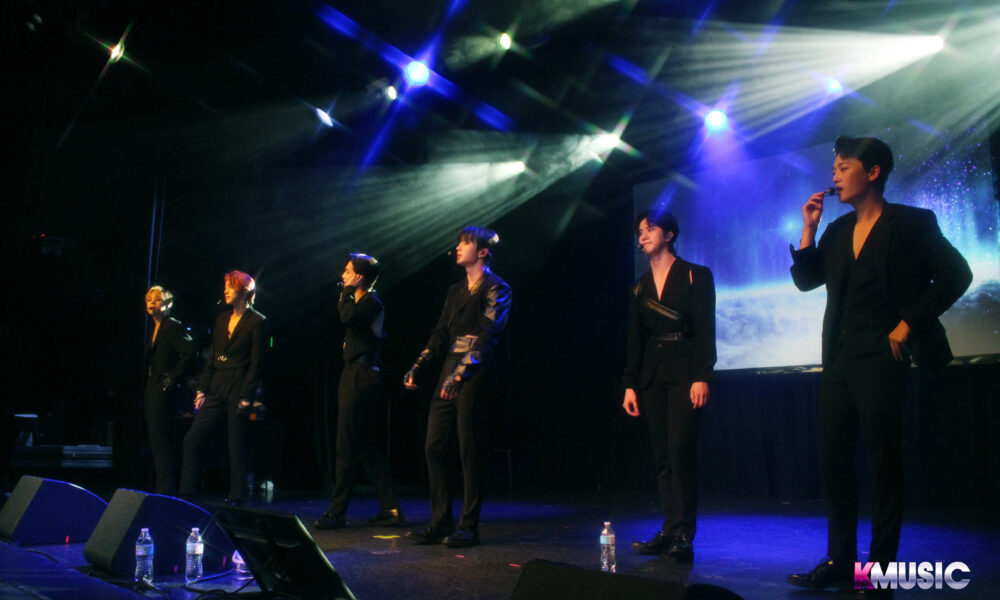 [K-Exclusive]: Falling in Love with WEi at First Sight

Kicking off the U.S. leg of their “FIRST LOVE” tour, WEi made their way to the quaint El Rey Theatre in Los Angeles, CA on a casual Friday evening. Picking the perfect timing, while the previous weeks were seeing scorching hot days and nights, the night of their show was nice and cool outdoors. Meanwhile, the inside of the theatre quickly heated up with the amazing performances from WEi, and the passion from their fans, known as RUi.

Starting the show off strong, the group performed “Fuze,” a song full of difficult choreography. The six members continued on with another energetic song, “TWILIGHT,” showing off their stable vocal and rap while executing their fast-paced dance. After a quick introduction of themselves, the guys slowed things down a bit with “TIMELESS.” Preparing several songs that fans would enjoy, the group also blew through songs like “Super Bumpy” and “BLOSSOM” with ease, before getting into some special stages.

Prior to the start of the stateside tour were the Japanese dates for the “FIRST LOVE” tour. The six members made sure to perform a few songs in Japanese for the shows there, so RUi here in the U.S. were highly anticipating what performances they would prepare for the U.S. dates. WEi unsurprisingly performed their cover rendition of Monsta X’s “Love Killa,” executing the senior group’s dance and song well enough to impress the Monbebes in the audience. While they did not have time to perform any solos, Seokhwa did a quick and powerful cover of Beyonce’s “Listen,” blowing away even the security guards and bartenders at the back of the venue. As a surprise song during the encore, the group performed Gayle’s “abcdefu” as well, coining it as a gift to the fans who have waited so long to see them.

Aside from strong performances and specially prepared stages, WEi is also no stranger to great fan service. Despite debuting during the pandemic and not being able to physically meet with fans frequently previously, the group interacted with their RUi like pros. Each member plucked a countless amount of phones from the audience, taking selfie video after selfie video to leave memories for their fans. The group also interacted with their fans in a casual way, almost as if they were long lost friends. “Wow, Mariah Carey?!,” one member exclaimed jokingly after a particularly high pitched scream from an audience member could be heard throughout the venue. “You guys are so beautiful,” reminded Daehyeon as he did his best to greet the LA RUis in strictly English. Simple gestures and comments like so helped the atmosphere feel comfortable and fun. The group also prepared some natural and casual VCRs to play between sets. RUi were able to watch as the group went out for a meal and discussion together, to when the group did individual interviews to hear their thoughts on the tour and more. For the audience members, it almost felt like watching a friend’s vlog.

Alas, all great things must still come to an end. Performing one final sweet song for their fans, WEi prepared English subtitles to explain the meaningful lyrics on screen while they performed the last song of the night, “16th Star.” Leaving their fans with a love that only grows stronger like that of the feelings you have for your first love, WEi ended the show with promises to return soon to greet their first loves, their RUi, again soon. Special thank you to KpopMe and Oui Entertainment for allowing Kmusic to attend and cover the show! Make sure to head to our Facebook page to view all photos from the show.

Scroll for more
Tap
All tickets and venues for BLITZERS in Europe are out!
[K-Exclusive]: VERIVERY’s First Show in Chicago
Scroll
Loading Comments...