After four years since debut and zero world tours, it was about time that iKon finally flew down under. Fast forward to October 25, 2018 at Big Top Sydney, Luna Park. Thousands of young high schoolers to first year university students lined up from early morning, skipping school or taking a break from their HSC study to be there. As iKon’s first trip to Australia, who knows when they would ever come again?

But why now? Well, 2018 was absolutely the boys’ year with the release of ‘Love Scenario’, their biggest track yet. The song reached number one on more than seven music charts in its first week, an achievement that until now, has only been achieved by the legendary BIGBANG.

As the fifth stop on the ‘Continue World Tour’, Sydney fans turned up with light sticks, memorised lyrics and some strong vocal chords to scream at their biases. Jinhwan, Yunhyeong, Bobby, B.I, Donghyuk, Ju-ne, and Chanwoo were surprised and grateful at the immense love their fans showed for them. 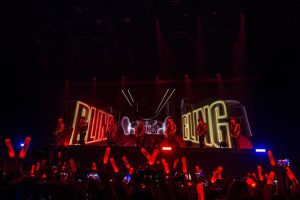 The boys kicked off the evening with ‘Bling Bling,’ a banger that would get any normal club revved up and ready to go. In between the occasional “Hello Sydney” and “What’s up Sydney,” the boys pushed through the sweat and sang ‘Sinosijak,’ ‘Rhythm Ta,’ and ‘Cocktail’. To an audience of young girls, most of which were under the 18, I couldn’t help but laugh at the irony of the boys proposing “Let’s have a cocktail.” Moreover, Bobby tried to pick up one of the other members but quickly dropped him to get back into the song.

Once the boys and the fans got a breather, Bobby got an opportunity to remind everyone to stay safe. “Before we start this concert, you gotta promise me to all be safe tonight,” Bobby said.

We then got an introduction to all the boys and their thoughts of Sydney so far. It seems that in under 48 hours, they’d already seen it all: The Opera House, Darling Harbour and the zoos.

Jinhwan couldn’t help but spend the evening showing off his English and making jokes where possible. “We went to the zoo… Featherdale Wildlife Park and we fed wallabies,” Jinhwan said. Then came ‘Only You’ by the boys.

An Aussie K-Pop concert isn’t worth it unless someone, somewhere either impersonates an animal or reluctantly tries their best at aegyo. In iKon’s case, we got both.

B.I and Bobby have undeniably cute chemistry that only true friends could have and it showed throughout the evening. Bobby proposed that we play a little game: If fans could recite all the words to ‘Love Scenario,’ B.I would have to give the people some aegyo in return. The fans won but B.I still refused and begged that this exchange be sorted out with a game of scissors, paper, rock. Disappointingly B.I beat Bobby and all eyes were now on Bobby.

“Please don’t make me do this,” Bobby said as he got on all fours. He started to be a wombat and crawl on the ground, pretending to eat out of B.I’s hands.

“He wants to eat food, but there’s no food here,” B.I joked.

The bit wrapped up with the quickest aegyo display that I had ever seen in my life by Bobby. If I had blinked, I might have missed it. 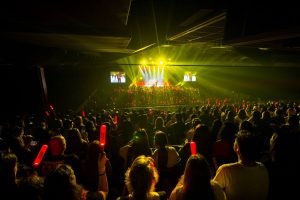 Solo tracks followed the display of cuteness, the highlights being Bobby’s ‘Love and Fall’ (텐데) and B.I’s ‘One and Only.’ For B.I’s curse-word filled ‘One and Only,’ it’s a shame that he would pull the mic away from his mouth every time the f-word came up. The contrasting tracks between the two performers was astounding: Bobby’s love infused solo versus B.I’s darker, aggressive rap track.

After the solos, the whole group was back on stage for a not so subtle hint at the next song, ‘Birthday,’.

“When is your birthday?” one member asked.

“Every day it’s my birthday,” one replied.

Next up, iKon’s ‘Anthem’ and ‘My Type’ continued the party.

There’s a certain bond seven guys build up after spending every day together, and iKon’s is one of savageness. In the lead up to ‘Best Friend,’ the boys spent a lot of time roasting each other, but no one got burnt more than B.I.

Jun Hoe revealed his sculpted six-pack abs for all to see and then asked B.I to do the same.

“Sorry everyone. I don’t have six pack, I just have stomach. I’m sorry I only have stomach,” B.I said. He pulled his shirt up and slapped his stomach. “See that, all stomach,” he said.

Of course, Bobby showed off with his remarkable set of abs too and made a swipe at B.I. The seven members split off into best-friend pairs, leaving B.I alone.

“I’m always alone. But it’s okay, I love myself,” B.I said as he walked off the stage.

As the boys performed ‘Best Friend,’ B.I showed up as the ultimate lonely boy with a yellow pyjama suit and rapped his way into our lonely hearts. 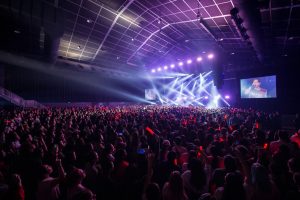 ‘Everything’ was the next song, but ‘Love Scenario’ would be the one track that would make the room fall still. As soon as the track began, fans pulled up their phones as if they were programmed to it, singing along in perfect Korean to the boys’ amazement. After ‘Goodbye Road’, it was obvious that the night would soon be coming to an end.

The boys took some time to tell us about how special this moment was for them, being in Sydney for the first time.

“I’m not good at English but I just want to say I love you Sydney,” B.I responded.

The boys continued “We’ve never been this far away from home so this is a really memorable moment for us.”

Next up came ‘Killing Me‘ and ‘Freedom’.

“Do you want me to sing all night?” Jinhwan asked.

The fans screamed a gigantic ‘Yes.’

It wouldn’t be a Korean concert without everyone screaming “encore,” which led to the boys final bellowing of ‘Love Scenario,’ ‘Dumb and Dumber,’ ‘Rhythm Ta,’ and ‘For You’.

At the end of the day, iKon made the four year wait worth it, singing songs from all across their catalogue, including solo songs and classics that even gave me nostalgic vibes. Hopefully they’ll return again soon, because I think the fans won’t be able to survive if they have to wait four years again.