After the hype of the day one activities at KCON 2017 Australia with the KCON Convention, the hi-touches, the audience engagements and the red carpet, it was time for everyone to take yet another deep, steadying breath as we prepared ourselves for the onslaught of some of K-pop’s finest acts all gathered together in one place and ready to perform for the first time in Australia.

Kevin Woo (formerly of U-Kiss) was the special MC for the pre-show and he managed to further hype the already hyped audience. There were K-pop dance performances from some amazingly skilled dance troupes to get the crowd in the mood for what was about to happen.

Kevin endeared himself to every person in the audience when he led the crowd in a rousing version of the Aussie fanchant of Aussie Aussie Aussie, to which the crowd roared the response Oi Oi Oi.

Kevin Woo got the crowd warmed up at KCON 2017 Australia 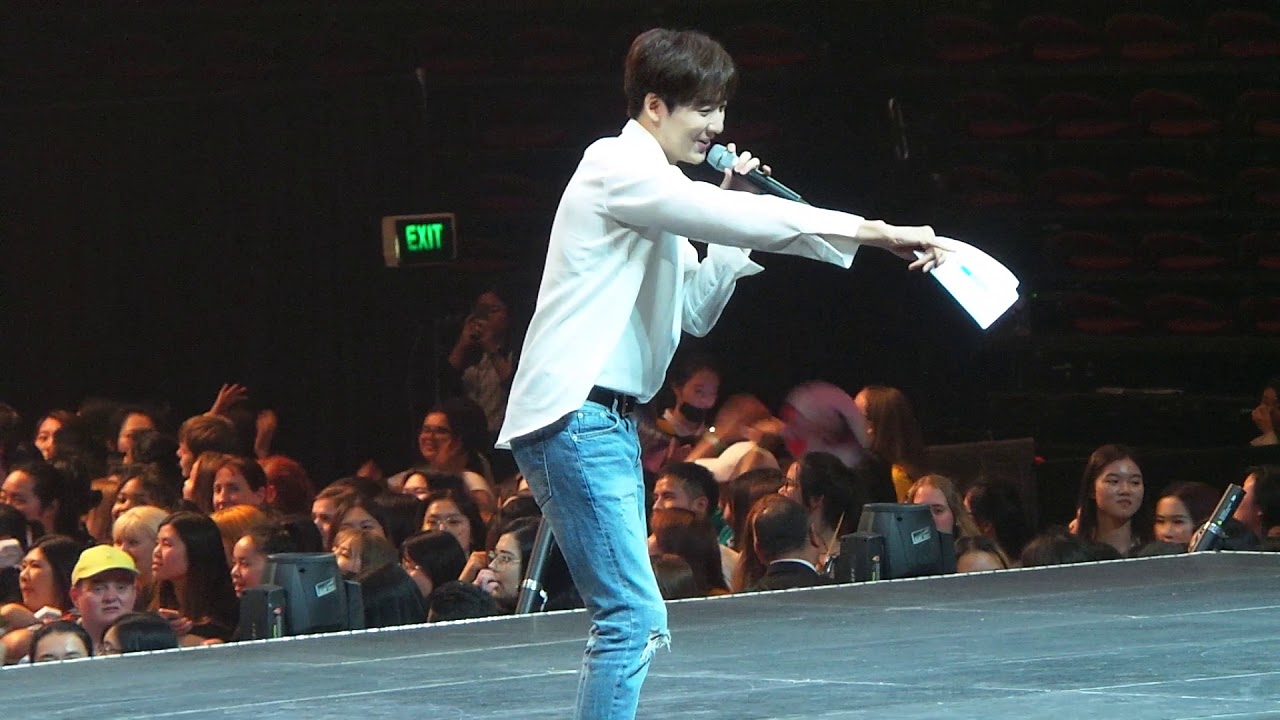 As the house lights dimmed two special MC’s emerged to start the concert.  It was none other than Suho and Sehun from EXO. 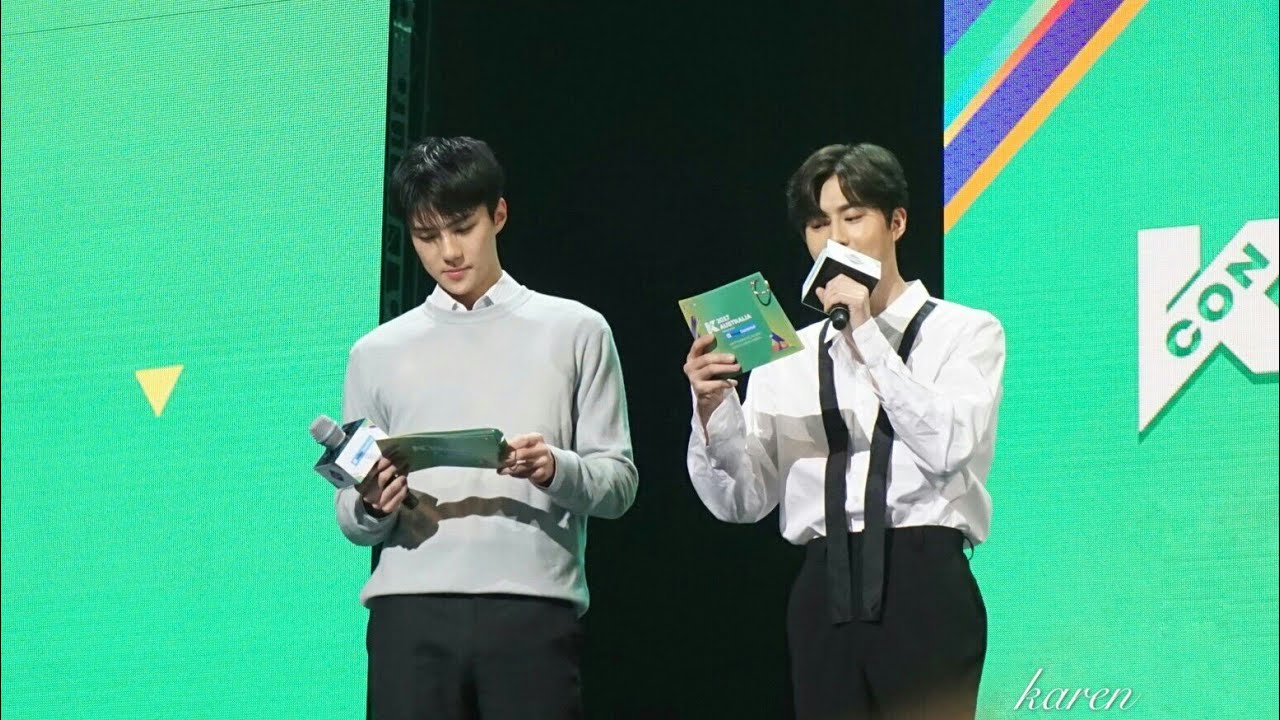 They welcomed the audience to KCON 2017 Ausutralia.  Suho spoke in English as he had on the red carpet, while Sehun spoke mostly in Korean with subtitles on screen for those of us who can’t speak Korean  They said they were happy to be at KCON with everyone before pretending to leave the stage because the audience wasn’t making enough noise.  Further cheering and screaming ensured that they returned to kick the concert off.

SF9 were first up on stage!

The lights dimmed again and the music level kicked up a notch, the stage lighting came on to reveal SF9 emerging from beneath the stage.  Their set-list consisted of an intro piece and their songs ‘Jungle Game’, ‘Fanfare’ and ‘Easy Love’.  After the first song, they took a minute to catch their breath and talk to the crowd before blasting into the next track.

The crowd loved them and their energy, their cute engagement with the audience and the choreography were amazing.  If anyone in the audience was not a fan of SF9 before the set, they certainly were by the time the group had finished performing.

PENTAGON were next to take to the stage!

PENTAGON blasted onto the stage with their latest track ‘Like This’.  It was a powerful performance combined with amazing choreography and production.  They then kept the vibe going with crowd favourite ‘Gorilla’ which had the audience on its feet and continued to impress with ‘Can You Feel It’.

During their stage, they introduced the crowd to the concept of the KCON Australia ‘Pinata‘.  A brightly coloured boomerang spun around on the screen and the group had to perform whatever task came out when the ‘Pinata‘ stopped.  When PENTAGON broke open their virtual ‘Pinata’ the selection was Random Dance Play.  They danced to ‘Uptown Funk‘ by Bruno Mars, ‘Single Ladies‘ by Beyonce and finally ‘Bang Bang Bang’ by Big Bang.

PENTAGON introduced us to the concept of the KCON Australia ‘Pinata’

As a special surprise for the audience the opening strains of EXO member Chanyeol’s OST from the hugely popular K-drama ‘Goblin’, ‘Stay With Me’ started as the stage lights came up to reveal Seola from Cosmic Girls standing alone at the front of the stage.  Then to deafening screams and exclaims of surprise, Chanyeol emerged from beneath the stage to sing his track with her.  The performance was astounding and moving and came with all the emotion that the track delivers.

Next up were VICTON!

VICTON was next to perform and opened their stage with ‘Unbelievable‘, after their performance they introduced themselves and chatted with the audience in English.  As a group they were very sweet and seemed to enjoy the audience response.  They told us that they would like to come back and tour Australia again.  I’m sure that Australian audiences would love to see them come back.

After teasing the crowd with the various activities that were contained within the ‘Pinata‘, it was time to shake the ‘Pinata‘ and reveal which of the fun activities the group would have to perform.  It turned out that they gave the audience a treat with Photo Time.  They went to all corners of the stage and posed for photos for the fans before coming back to the centre as a group and finishing off their set.

They then performed their song ‘Blank‘. and finished their stage with the awesome song ‘Eyez Eyez’.

Girl’s Day were next to perform for KCON 2017 Australia

Girl’s Day were sweet but powerful during their set.  They opened with ‘I’ll Be Yours’, continued with ‘Something‘, and ‘Expectation‘ before closing their stage with ‘Ring My Bell’.  Their vocals are strong and clear and the stage was perfect to introduce them to their many Australian fans.

It was then time to get ready for the most anticipated act of the night – EXO.  The nervous energy and anticipation of the crowd was building and then, as a pre-cursor to the main event of the night, the crowd was treated to some of the groups that had already performed coming back out on stage and performing cover versions of some of the biggest K-pop tracks of recent times.

There was no time to recover or breathe or recover as the lights went down and EXO‘s ‘Power’ exploded out of the speakers and the group emerged from beneath the stage.

The crowd roared in approval and sang along as the members made their first stage in Australia one we (and hopefully they) will never forget.

EXO performed ‘Power’ for their first stage in Australia

The noise from the screaming fans was deafening during the introductions which proved how loved the group are in Australia.  The award for cutest moment of the night goes to Xiumin who when introducing himself as part of the group introductions apologised to the crowd that he couldn’t speak English, but that he loved everyone!  All of which was said in English!

Suho then mentioned a few of the sightseeing highlights around Sydney before telling the crowd that their favourite thing to see was them!

EXO joined in on the fun and did ‘Pinata‘ with the audience.  Their selection was photo time.  The crowd were thrilled when they spent time posing in various locations across the stage, at one point Chanyeol was even doing push-ups on stage.  At one point Baekhyun even told him to ‘calm down’.

The group also performed their hits ‘Tender Love’, ‘Heaven‘, ‘The Eve’ and ‘Ko Ko Bop’.  The entire set was as perfect as we would have expected from this group.  The sound, the lights, the production, the choreography were all in sync and took the entire event to a whole new level.

KCON 2017 Australia lived up to all expectations with the Day 1 concert.  All of the acts were performing in Australia for the first time and all had been highly anticipated – none more so than EXO!

The light show, production, staging, sound, all worked in perfect synchronicity with the acts to provide an amazing performance of K-pop for those new to the genre and to those of us who already love the genre.

Were you at KCON 2017 Australia?  What did you think of the Day 1 concert?  Let us know in the comments below.