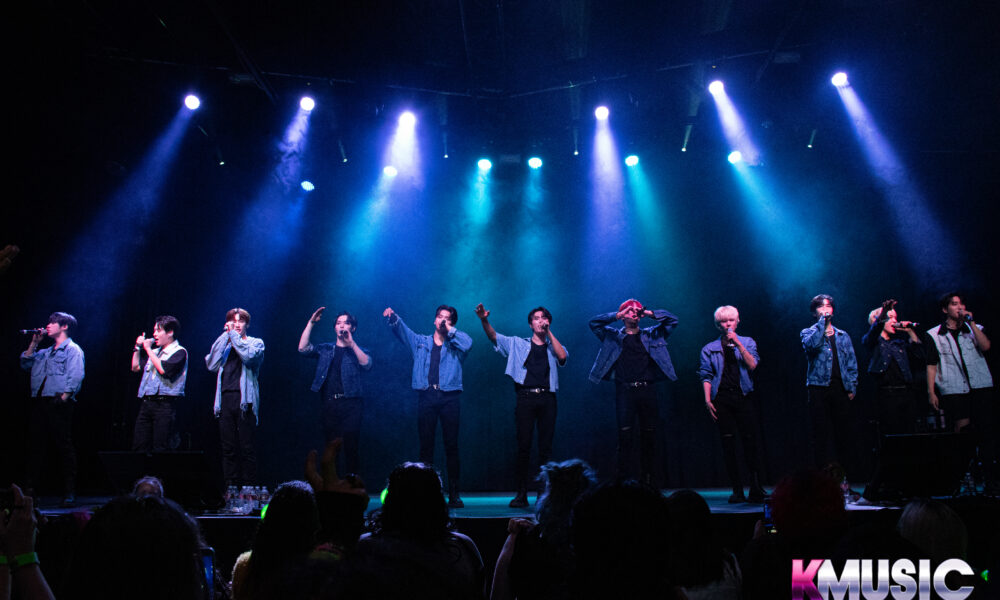 OMEGA X made the eighth stop on their first world tour, [CONNECT : Don’t give up], in Denver on October 13th. With far and few groups visiting Colorado for their U.S. tours, the event was extra special as it was the first opportunity, of hopefully many, for the 11 members to greet their fans. Amidst show cancellations and issues with their promoter, fans, known as FOR X, were relieved and excited to see their favorite group.

When the lights dimmed for the show to start at 7pm, chaotic screams from the group’s beloved FOR X filled the room. Opening with “Vamos,” their official debut track, the crowd sang, danced, and cheered along. Continuing on the hype with songs like “엎음땡,” “What’s Going On,” and “Baila Con X,” the show was moving forward with high energy before a brief costume change was done before the next performance of “Love Me Like.” To everyone’s surprise, Taedong, who had gone on a brief hiatus starting with their Chicago show, made his return to greet their fans in Denver. FOR X cheered and showed their love and dedication the entire night, even cheering in unison during the brief costume changes before the stage lights came back on to welcome the members back.

Around the halfway mark of the show, the members prepared a surprise interlude section for fans, where fans were quizzed on member trivia. The fan that correctly answered the question was allowed on stage to receive a sweet serenade from the group, and the audience gazed with envy as they sat on stage with all eyes on them. As the show grew closer to the end, the vibe that started out with high energy, upbeat songs, took a turn for milder, slower songs. The group went through songs such as “Liar,” “Binary Star,” and “For Baby,” which was a song exclusively available on their album. The night concluded with tears both of sadness and happiness, as everyone left with unforgettable memories.

Thank you to OMEGA X and team for allowing Officially Kmusic to attend and cover the show, and don’t forget to head to our Facebook page now to check out all of our photos from the show!

Scroll for more
Tap
A strong tour start for BLITZERS!
[K-Exclusive]: A “Healing” Evening with The Rose
Scroll
Loading Comments...