Among the global B-boy community, Korea is well known for its developed b-boy scene and high-level skills. Every year Seoul hosts the world finals of a prestigious breakin’ competition named, R16 (“Respect” 16). This year, the two-day tournament was held at Jang Chung Gymnasium on September 12th and 13th. 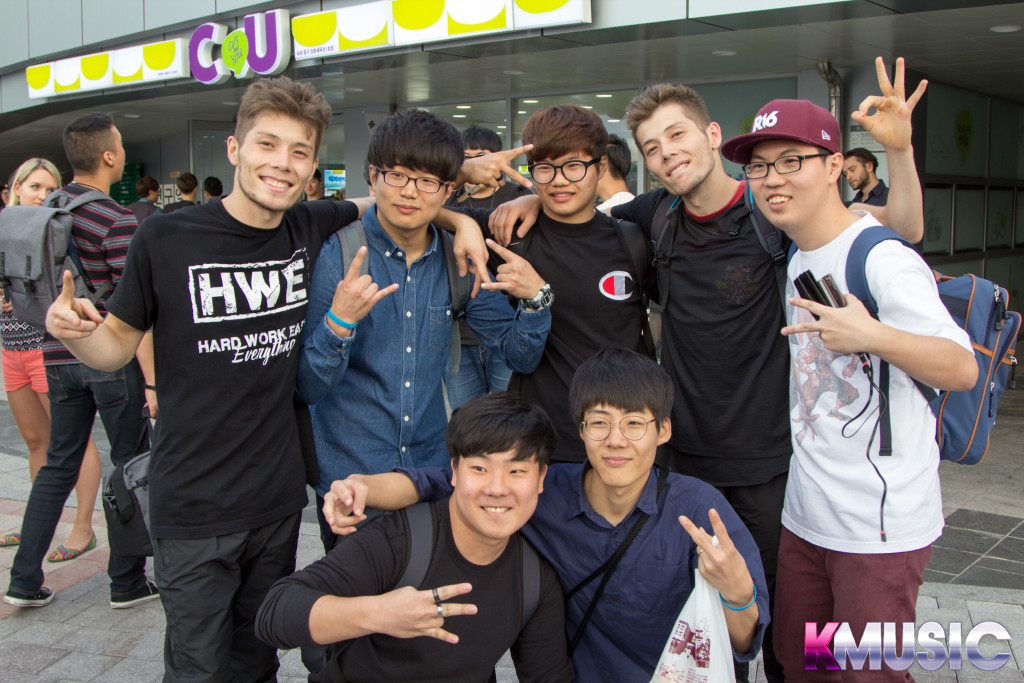 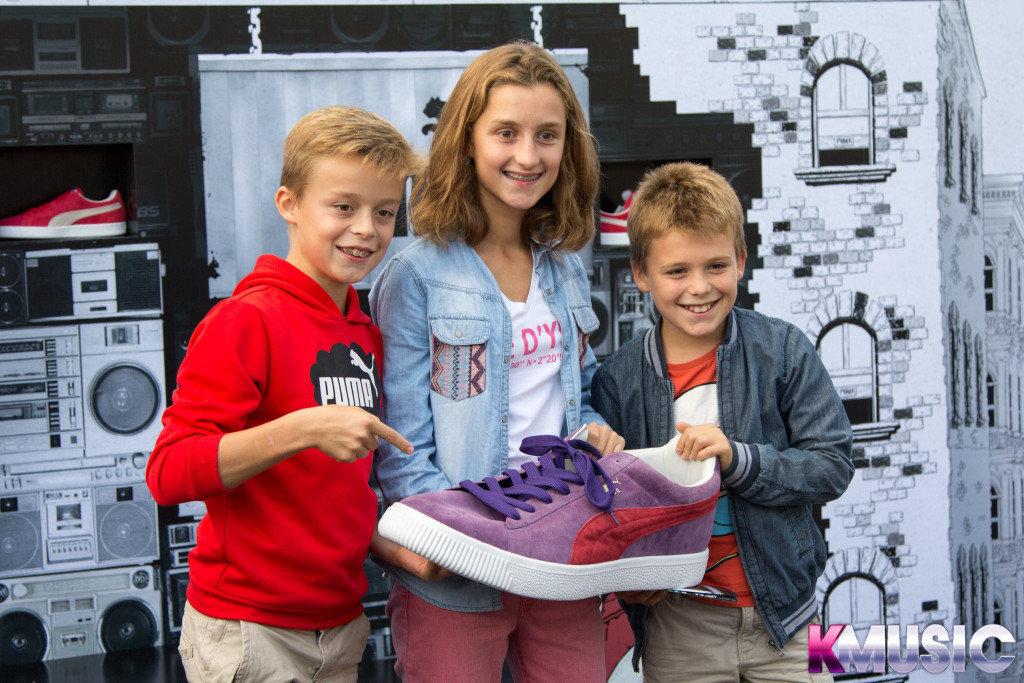 People who arrived early for tickets were treated to an outdoor party atmosphere of a live DJ, smooth roll-out dance floor, and vendors. Puma sponsored the open-air cypher—dance circle—and an Instagram contest for attendees taking pictures with their four foreign models dressed up as old school b-boys. The brand was selling 9th annual R16 edition Puma Suedes. Other vendors included Montana spray cans, handmade goods, SNDS eyewear, and the official R16 clothing booth. A barbershop was also set up to offer fresh cuts and pomade. With good music, fresh gear, and an active cypher, summer vibes were in full effect. 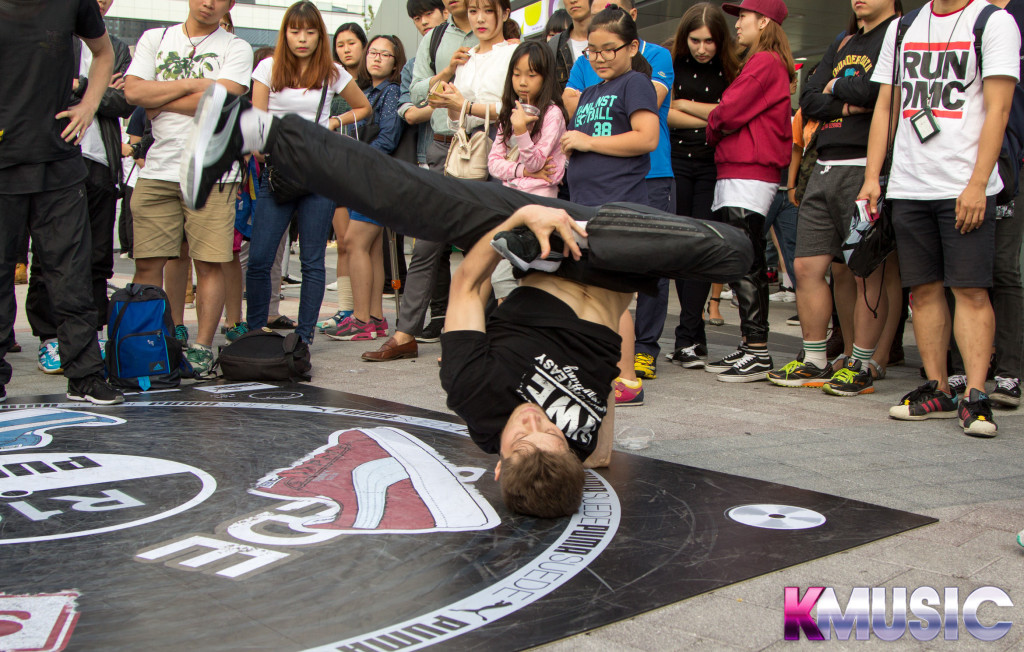 Before the official battles started indoors, a cypher battle broke off at the Puma area between a local Korean b-boy and one of the members of Team Kazakhstan. In cyphers, the winner can be distinguished by the dancer’s mood. Let’s just say, the Korean b-boy was angry, while the Kazakhstan b-boy kept a smile. 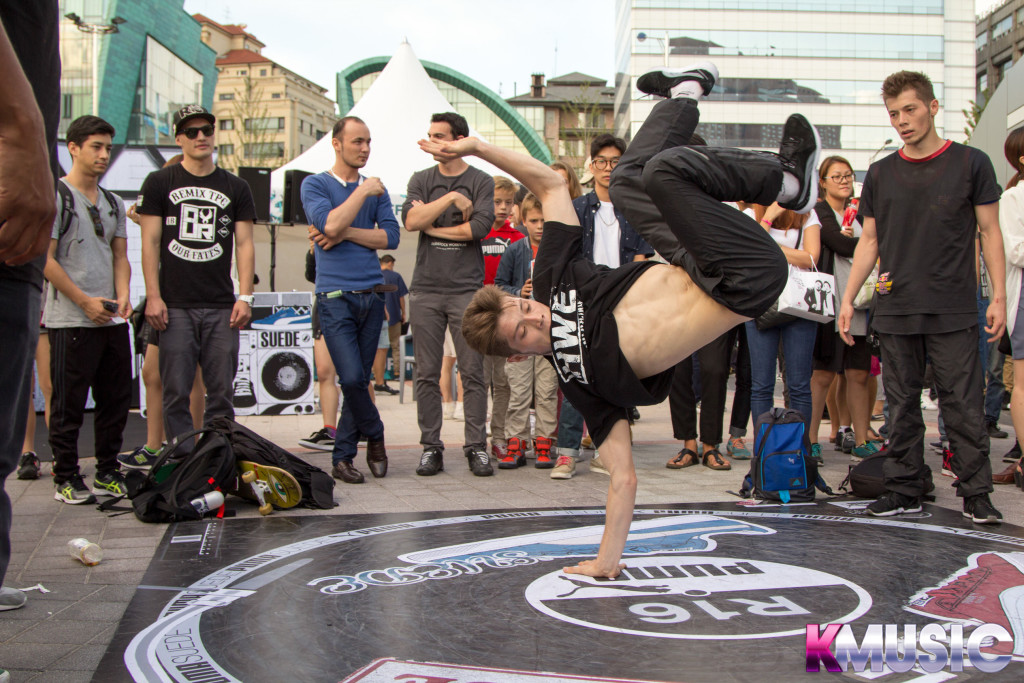 When asked by one of the Puma models as to why the Kazakhstan b-boys danced so hard despite having a battle competition the following day, one reportedly said that when the music plays, they can’t stop. They want the DJ to stop so they can rest, but he won’t. So they keep dancing.

The video above kicked off the official events with quick glimpses of dance tricks mixed with scenes of modern and traditional Korea: Taekwondo, baseball, masks, hanboks, and even an ajumma in a b-boy stance. 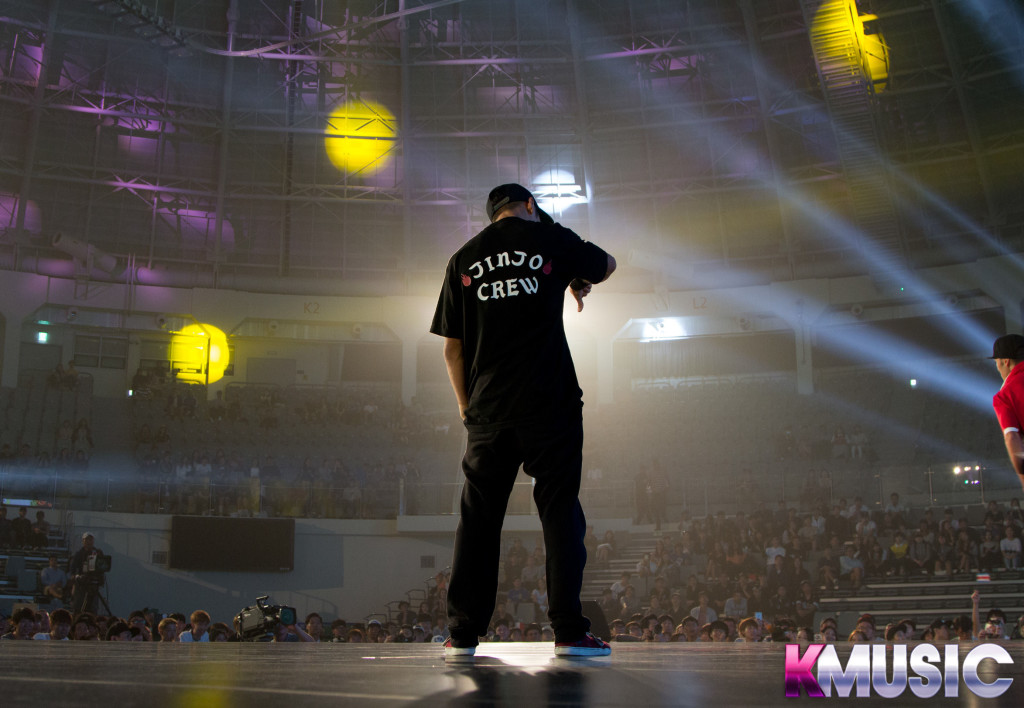 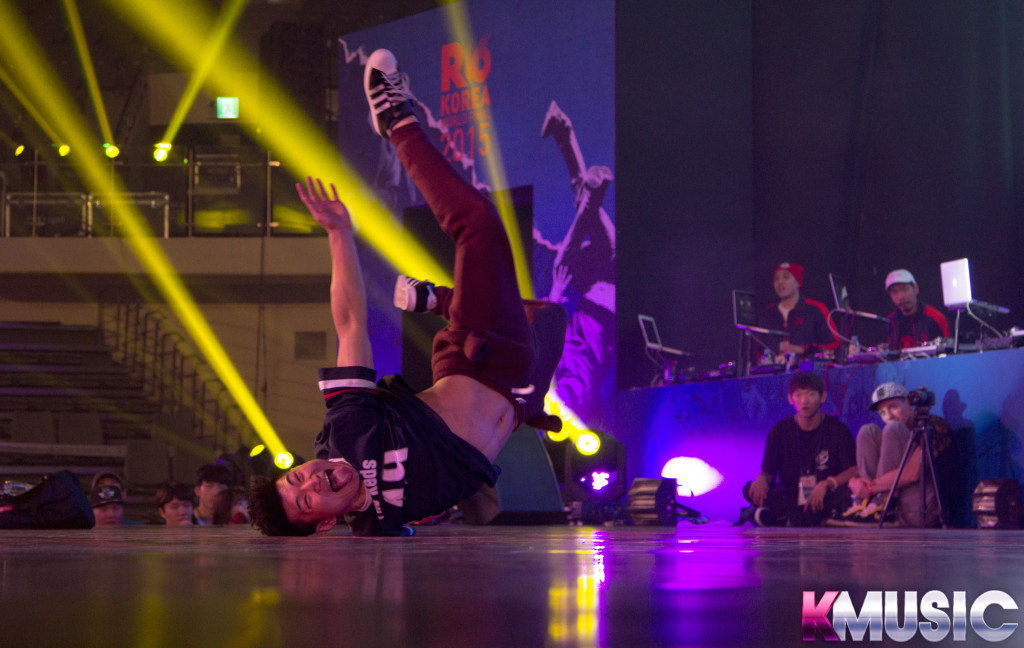 The b-boy battles were judged by the fusion of a five-category system (the OUR system) and a round-by-round—best-of—system (the Kozen system). As a result, b-boys could get either discouraged or fired up by the results of the immediate feedback in each round. 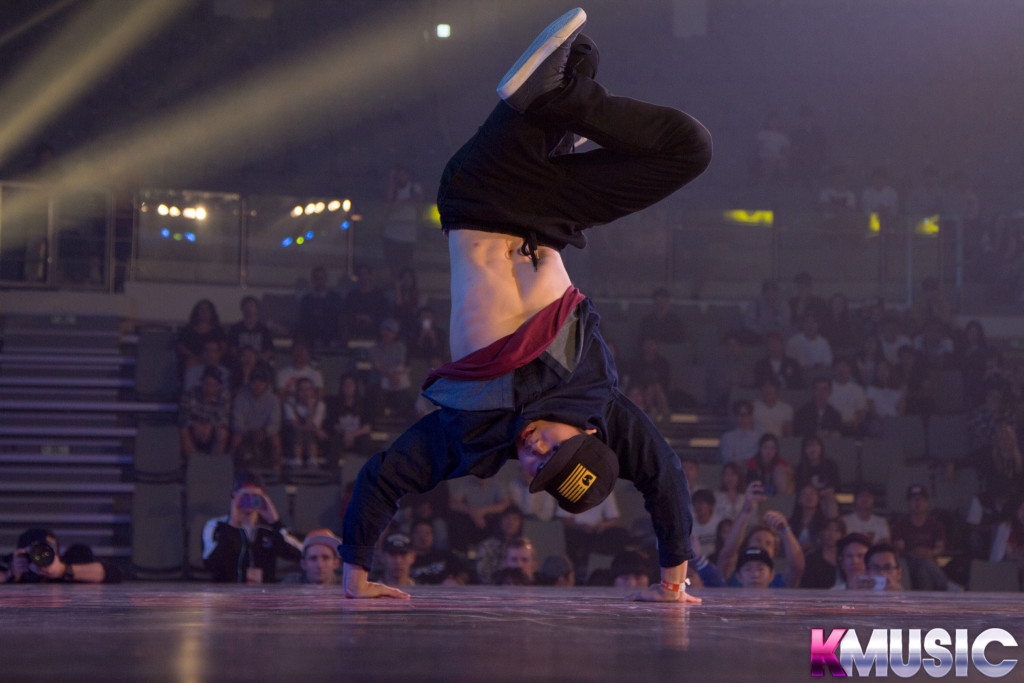 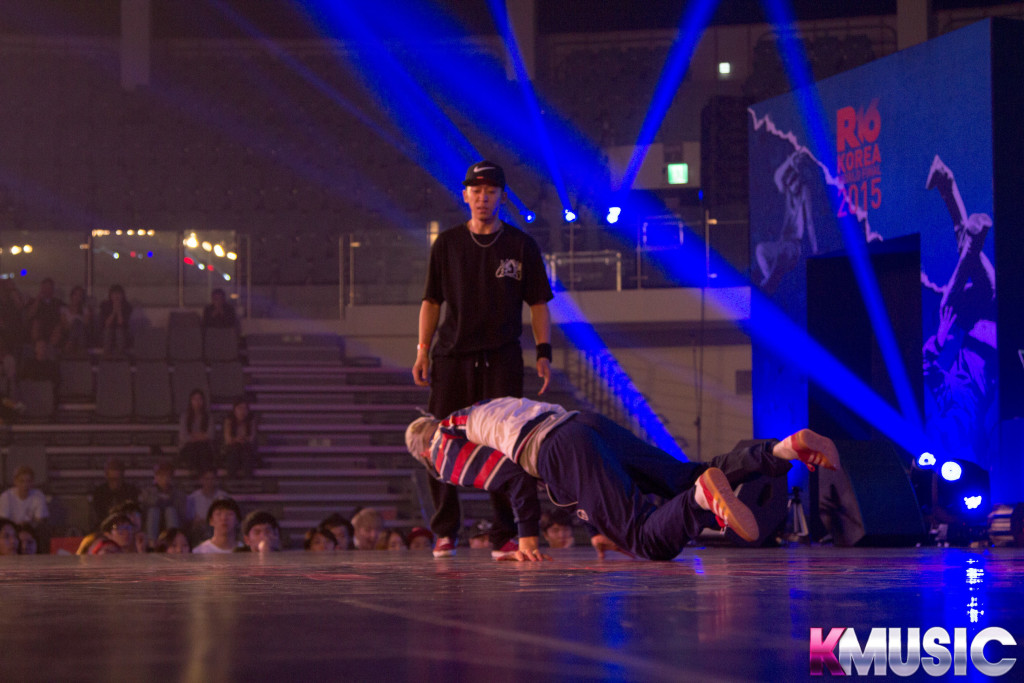 “Sometimes you feel you won that round and then you see you didn’t win. You have that What-the-F*** feeling within the battle,” Solo b-boy winner Menno, said about the mixed system’s ability to work in the favor or disfavor of competitors. “It’s a little bit [distracting], but at the same time motivating to go out in the next round.”

After the digital scoreboard displayed immediate first round results, some battles completely turned around as the losing competitor stepped up their game, like in the battle between b-boys Victor and Issei—which can be seen above. 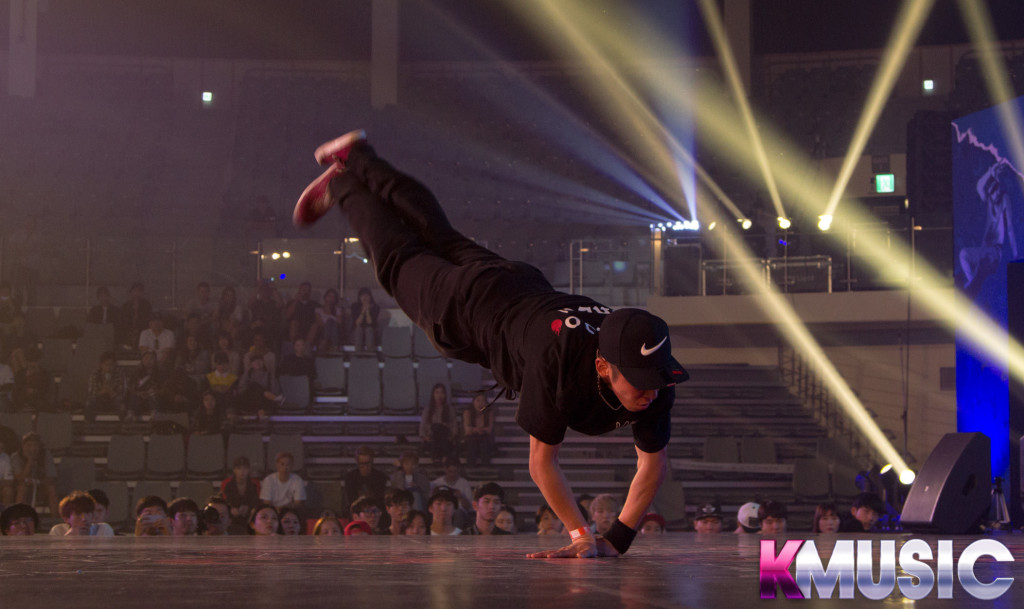 “The organization and production of the event was incredible,” said b-boy Killer Wave, who was flown out from Costa Rica to compete in the b-boy one-on-ones. “Like we were in a movie.” Killer Wave, like many other competitors, had to make it through two eliminations to earn his place in the bracket—national elimination, then regional or continental. This speaks to the global scale of R16 as it attempts to raise the bar for global breakin’ competitions. “It’s the first time that a b-boy from Central America is on an international stage with the top 16 in the world [for a one-on-one competition],” added Killer Wave.

Arguably the most unbelievable and significant moment of the day one battles was when Korean b-boy, Vero, defeated the three-time reigning solo b-boy champion, Issei from Japan in the semi-finals, as seen above. Vero nearly smoked him by scoring higher in almost all of the categories and won within two rounds. 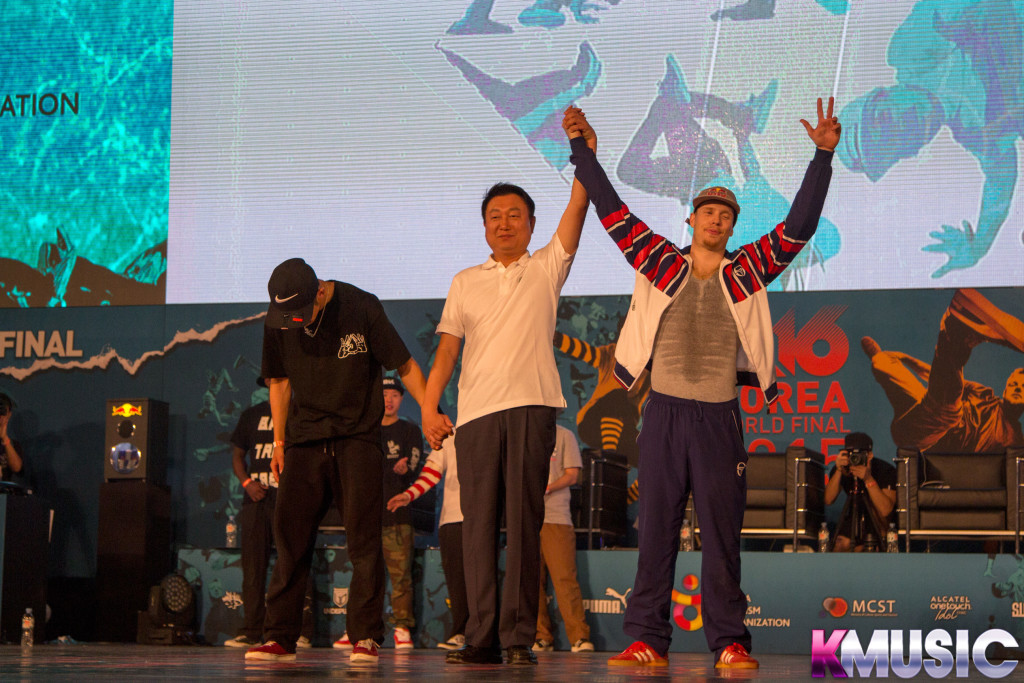 By contrast, locking battles were the most playful with more smiles and cheeky moments. By the final, competitors began vibing off each other by dancing face-to-face during each other’s rounds or transitioning from each other’s rounds as if they was pre-choreographed. After they bowed in sync to each other at the end, the MC even commented that it was like a performance.

“[In] the style of locking that I was taught by original lockers, you’re not supposed to battle,” said Flowmaster—one of the judges. “Locking is a showmanship dance. When you go out there, you’re supposed to entertain your audience.” 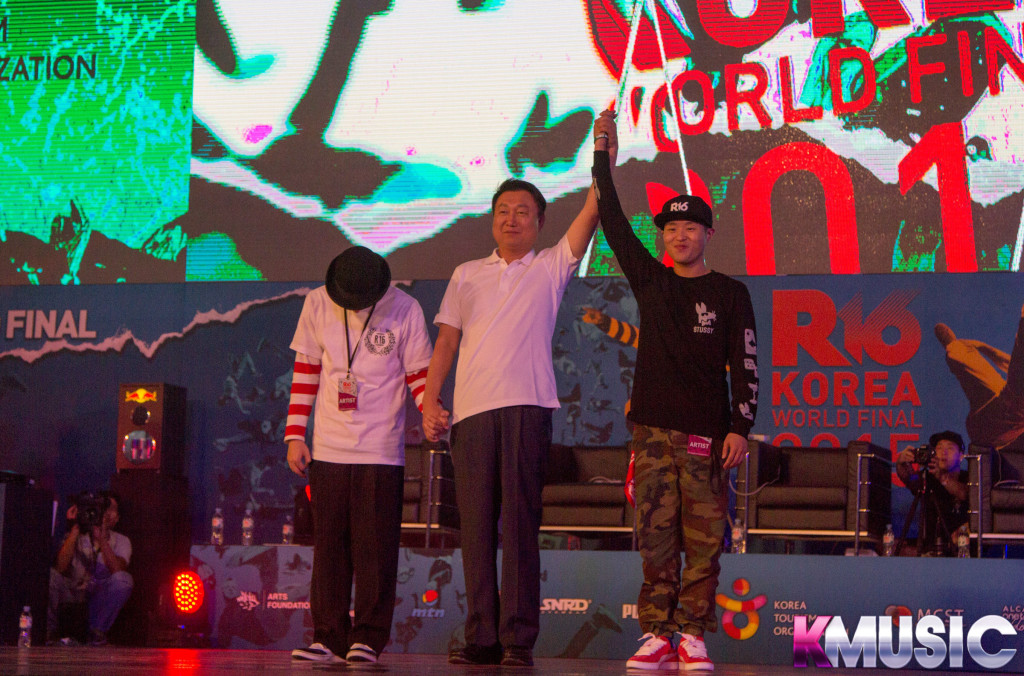 “Locking is a party dance,” said the winner, Locking Moon, echoing the sentiment of Flowmaster. In his interview, Locking Moon went on to say that a point-by-point judging system wouldn’t work well for locking. Most competing lockers dressed in funky styles such as baggy pants with high stocking socks and 70s style hats. The DJ played exclusively funk songs. The music, clothes, and dance style was nostalgic of 1970s USA, when locking began spreading more. 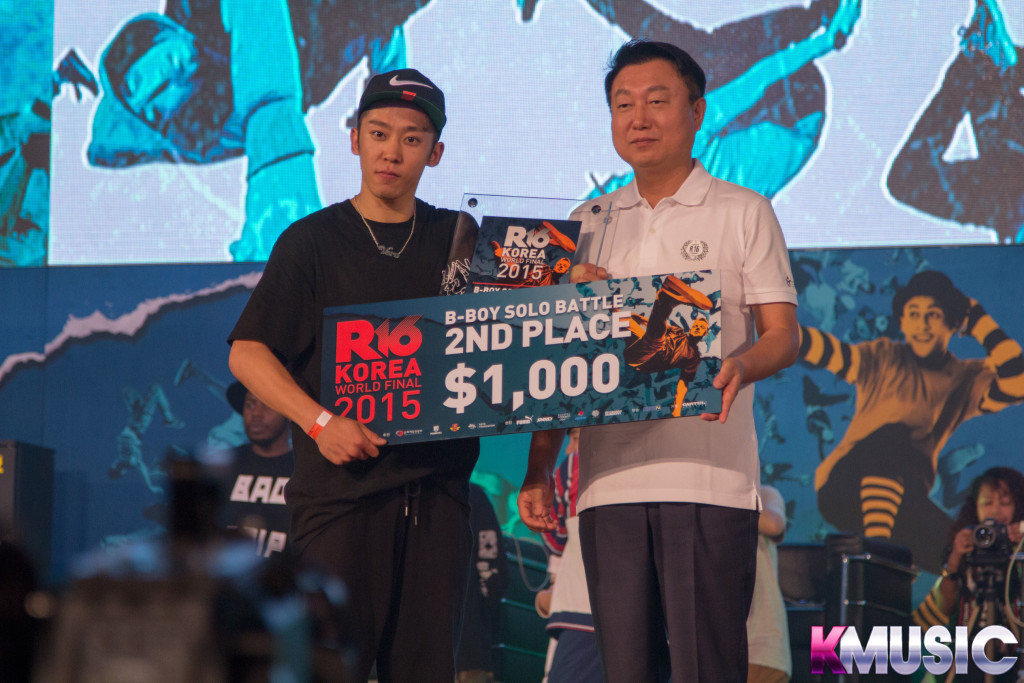 “If you’re going to do this style of dance, in my opinion, you should have some type of the locking feel and the locking dress [attire]. It makes the dance that much better,” says Flowmaster. “When you play basketball, you don’t play it in jeans do you?” Additionally, dressing in locking clothes and knowing classic locking songs, like the music played at the finals, could ensure a level of appreciation for the dance. The appreciation and understanding helps denounces the sentiment of cultural appropriation. 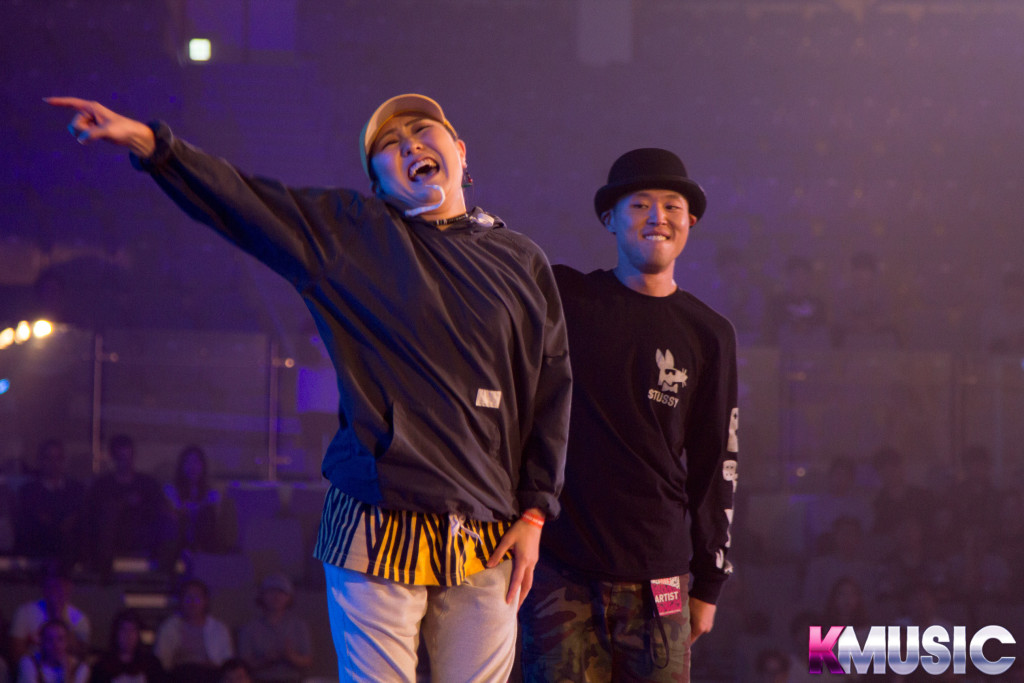 The popping battles also had a fun vibe, with the judges even entering the stage for the finals with hands-on-shoulders doing a train wave. 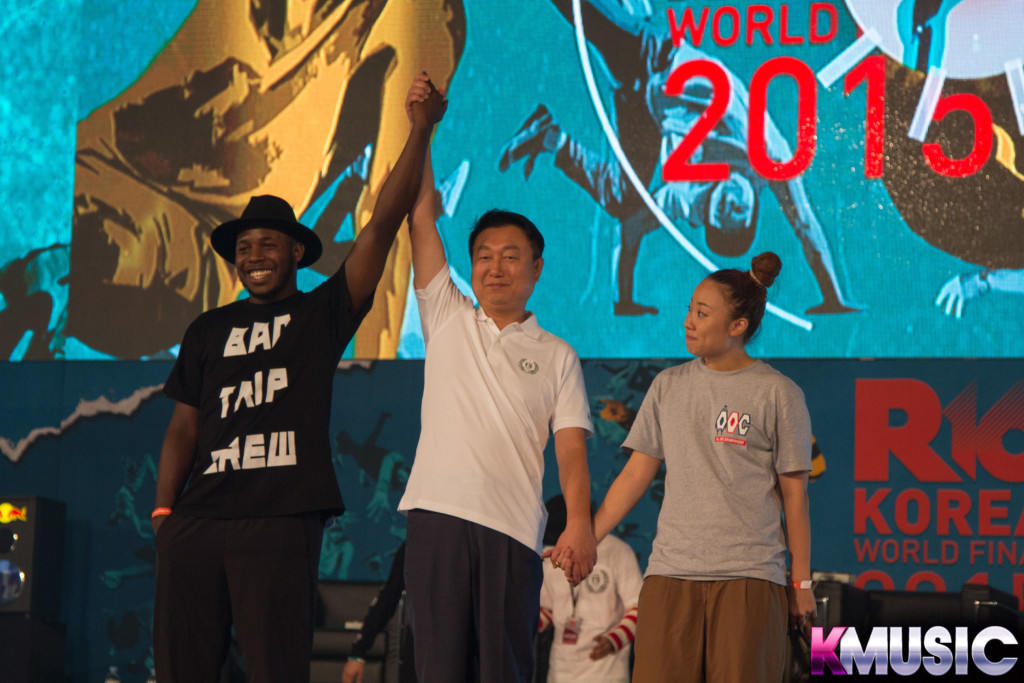 Prince from France defeated Eun G from Korea in the popping finals. Both had incredible musicality, but Prince edged her out in his responses. At times, they mirrored each other’s steps and hits in contrast, which is only possible during slower-paced, standing dances like popping and locking 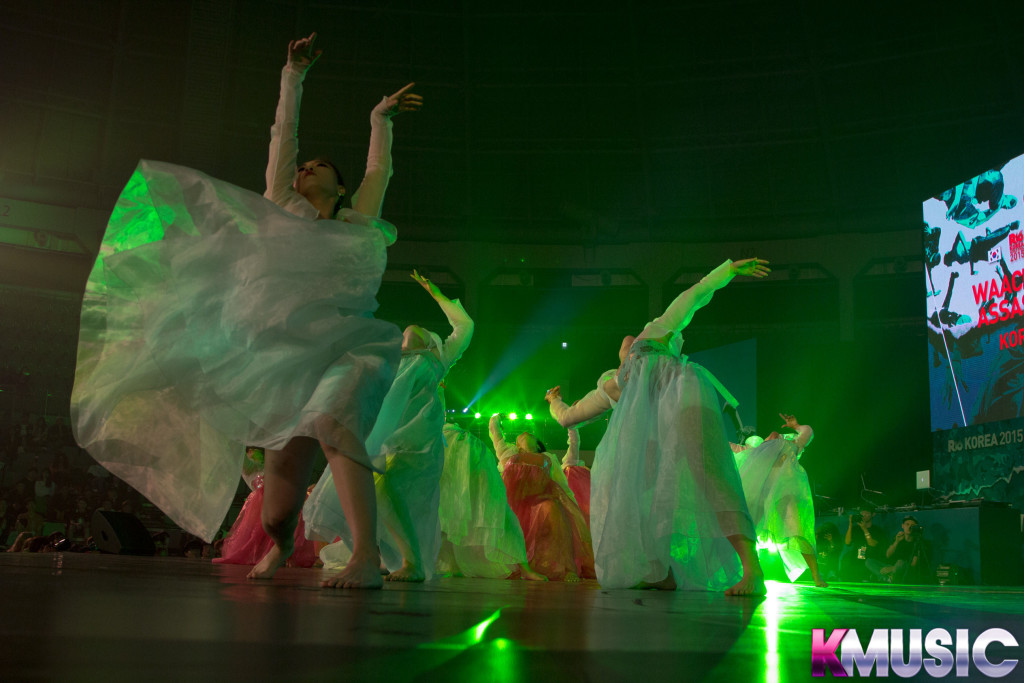 Local waacking style dancers, Waacking Assassins, performed a piece scored to a Korean pop ballad. Dancers in light-fabric hanboks bent gracefully to the croons of the vocalist on the song. 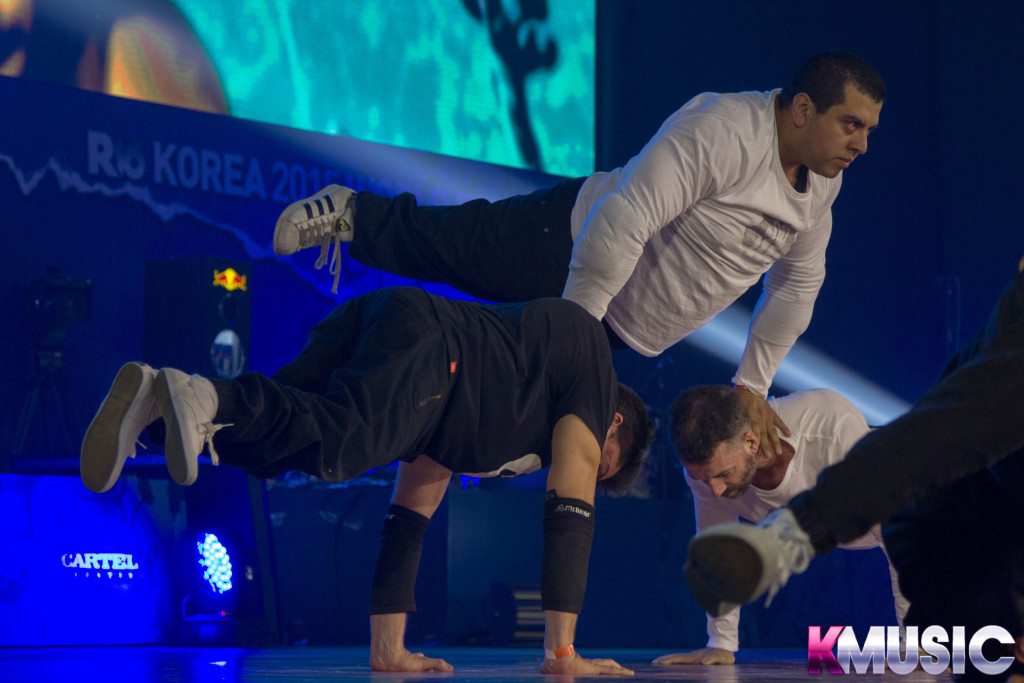 ILL-Abilities, a crew composed of handicapable b-boys shook people’s perceptions of what a typical b-boy looks like as well as what a differently-abled person can do. The crew’s slogan, “No excuses, no limits,” was displayed through their feats of upper body strength and creativity. 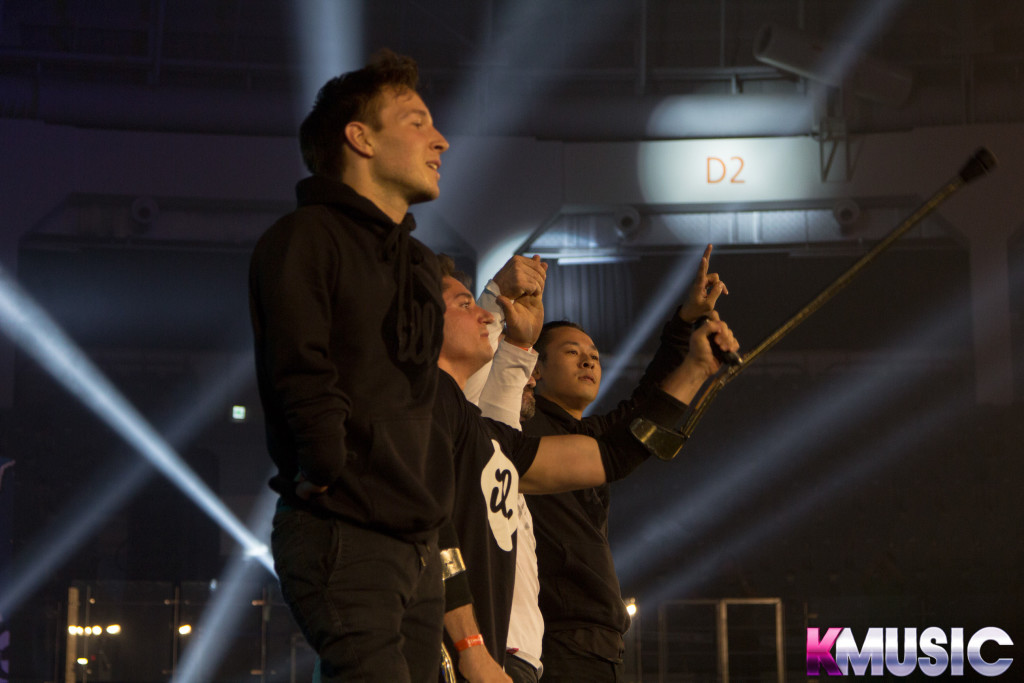 Members with personal challenges such as neuromuscular disorder, prostetic legs, and significant deafness amazed the crowd with strength, style, and grace. LazyLegs held a straight-legged plank on crutches to move over Checho, who did a plank below him. Some propelled each other’s slides. They even ended in a pyramid of planches.

The team is an inspiration in overcoming adversity to pursue your interests. Additionally, the members seem to have a good sense of humor despite their challenges. As the crowd cheered at the end of the performance, the legally deaf dancer, Kujo, cupped his ear in the common “I can’t hear you, gesture” to make the crowd roar even louder. 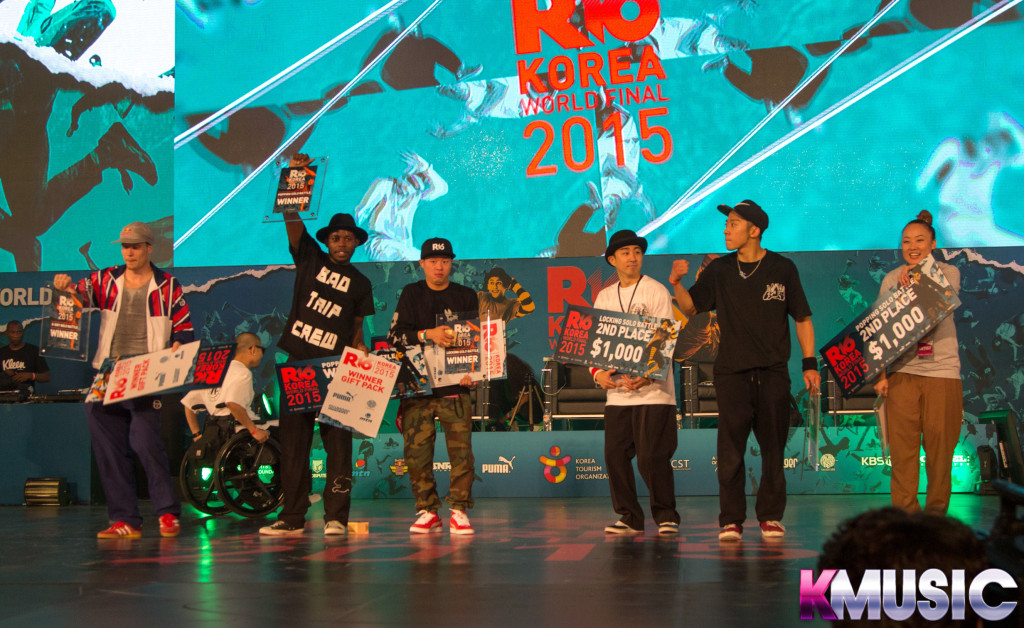 Day one was a good warm-up for the two-day festival. The popping and locking battles had a fun vibe. Although the b-boys were mostly aggressive during the battles, they slapped hands via Hip-Hop handshakes or hugged at the end to show sportsmanship. Day two was the immensely anticipated national crew battles as well as a test of this year’s new national crew format.

Click here to check out our Facebook album for the rest of Day 1’s the pictures from R16!
Stay tuned for our Day 2 coverage of the R16 World B-Boy Masters Championships! 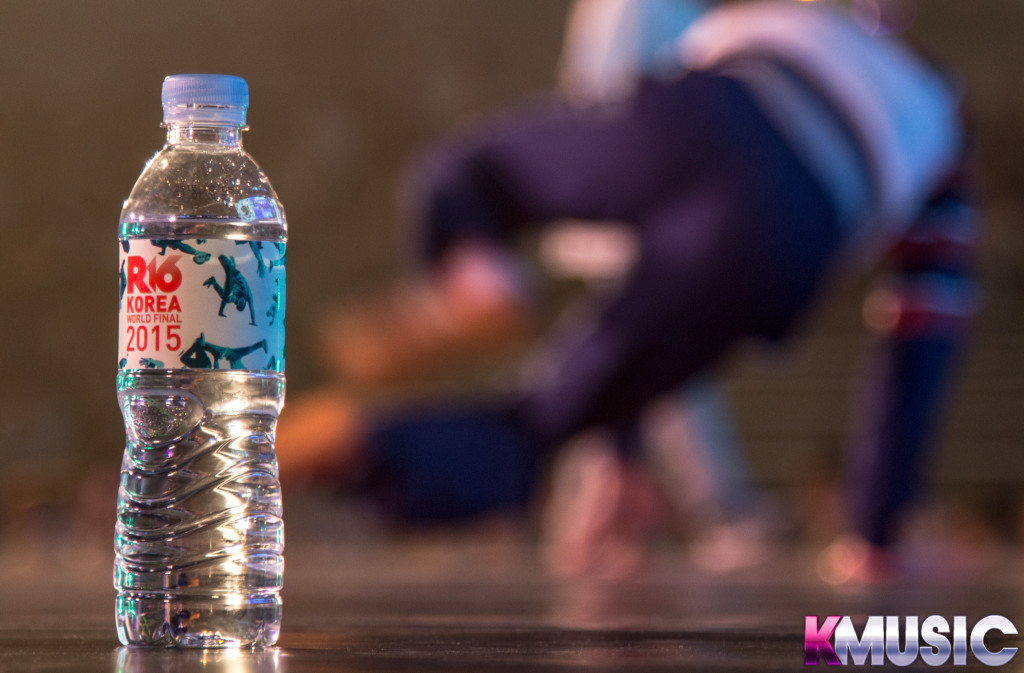 We here at Officially KMusic would like to give a huge thank you to R16 for allowing us to attend and cover such an exciting event! We look forward to your future events!