[K-EXCLUSIVE] “We Rose You!” echoed in Berlin during The Rose´s concert 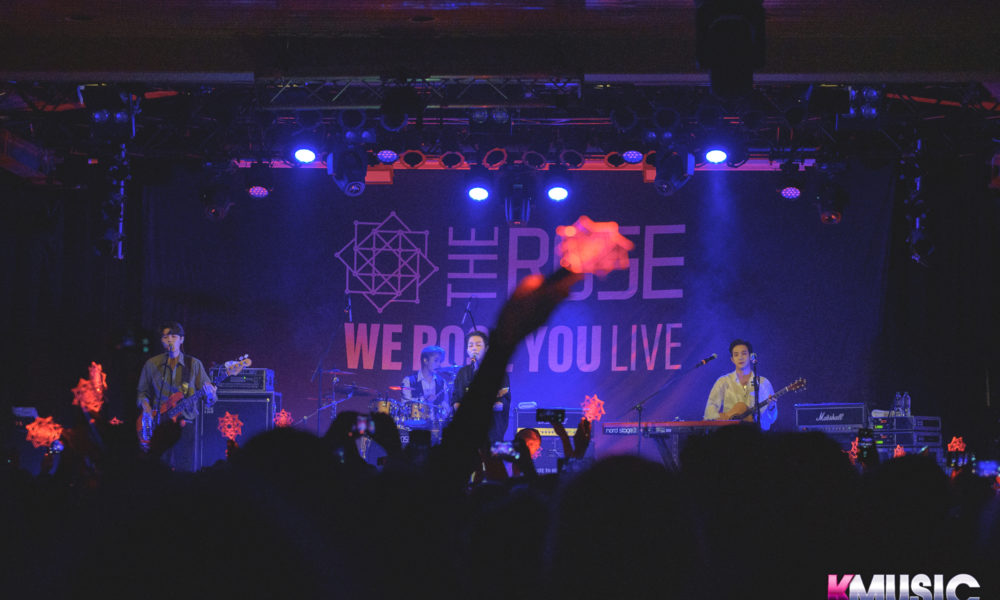 [K-EXCLUSIVE] “We Rose You!” echoed in Berlin during The Rose´s concert

After a long wait, the group The Rose returned to Europe and we were honored to attend their concert in Berlin. The group prepared a lot for the night and we are here to share the experience with you all.

Their concert started off with “I.L.Y.”, “Insomnia” and “I don´t know you” followed with “Candy (So good)”. After the first set of songs the introduction ment happened and Woosung introduced the band and praised the fans with a big smile on his lips that the fans welcomed them back so loudly. The members then proceed in shortly introducing themselves. The fans truly welcomed the members warmly and so loudly it was incredible to see the energy being back in their veins, after the very long wait in the cold weather in front of the venue.

The next song was „Beautiful girl“ and the fans were thrilled when Hajoon stepped from behind his drums to join the other band members at the front as he rapped and sung together with them. It was obvious how much the other members enjoyed singing all together, while seeing the support the fans showed to them.

When the next track´s first notes echoed through the venue, the fans knew that one of their most loved songs is coming. Woosung first wanted to hear the fans singing this song, so he reached out his microphones into their direction and the air was filled with the fans´ voices. When the fans were singing, all members smiled widely on stage, enjoying the moment. And when the first part of the song was over, the group started singing “Like we used to” with them.

Coming up was „California“ and „She is in the rain“. Prior the second song, the fans were screaming and shouting so hard the members waited for a very long time before they could speak, delighted by the support.

„You guys listen to „She is in the rain“ a lot?“ Dojoon asked and fans in unison replied „Yeah!“

„I felt it,“ Woosung nodded.

„Hopefully this will be a valuable memory for you, guys,“ Hajoong added. „Thank you!“

Jaehyeong joined in as well by saying: „Thank you for coming. Today is my most memorable. Thank you.“

Another set of songs followed between them also solo performances. Hajoon beautifully enchanted us with „Soldier“, Woosung performed „Face“, the band covered „Hold back the river“ by James Bay as well as „Hey Jude“ by The Beatles.

When Woosung stepped on stage to perform his solo song, he thought a fans fainted so he stopped immediately to make sure everyone is alright. When they had another talking break The Rose asked the fans to step back a bit to make more space, because as Dojoon said „We don´t want anybody to get hurt“. And so the big crowd of people stepped back, looking out for one another, so that everyone can enjoy the concert safely.

During this ment the group also prepared a little gift, they called out random numbers for each category and the fans with those numbers had a unique and special gift prepared at the merch booth – a Polaroid photo of the members. This ment was also special because apparently the guys made a bet which Woosung lost and as a sort of a punishment he had to prepare something special for the fans. He went backstage and when he returned he wore gloves and wolf mask, shortly performing „Wolf“ song which made the fans overly excited.

Two more songs were performed, „Photographer“ and „OMG“ which both made the venue heat up. When Dojoon asked the fans whether they can get even more crazy, the response was a wild „YES!“. To show how crazy The Rose wants the fans to get they quickly performed a short guitar stage, but it was not fast enough, so Jaehyeong asked if they can do it even faster. Despite Hajoon´s careful „No“  the group performed the short piece twice as faster, totally losing it in the speed and gaining an enormous response from the fans.

The last songs of the nights were „Take me down“ where the fans fanchanted really hard, the newest track „RED“, the ultimate favorite „Sorry“ or „Baby“. The evening ended with a loud „We rose you“ fanchants and the boys leaving the stage with the happiest smiles possible.

Just as last year, the concert was filled with incredible support, love and a common goal to enjoy the night as much as possible. It was a very beautiful concert which will, for sure, stay in the memory of fans for a very very long time.

View the full photoalbum from this concert on our Official Facebook photo album.