The line-up for ‘London Korean Festival 2017 with Feel Korea‘, the biggest family cultural day in London, has been announced and it is no wonder fans are so hyped up about this event! The groups that will appear on the stage are HIGHLIGHT (formerly known as Beast), EXID, KNK and Snuper.

Highlight made a comeback this year with their mini album ‘Can You Feel It?‘. The title track from this album, ‘Plz Don’t Be Sad,‘ gathered lot of love from fans not only in Asia but abroad as well. The MV has now an unbelievable number of views – more than 17 million!

EXID, the group known especially for their catchy song ‘Up and Down‘, returned in April this year with an album ‘Eclipse‘ and we recommend their lead single ‘Night Rather Than Day‘. The group is known for their other amazing songs too, such as ‘Every Night‘ or ‘Hot Pink‘.

The incredibly talented group KNK debuted last year with their album ‘Knock‘ and this year in March the group had their first solo concert tour around Asia. Their newest album is named ‘Gravity‘ with the title track, ‘Sun, Moon, Star‘.

Snuper is a six-member group that debuted two years ago with the album ‘Shall We‘ that made fans fall in love with them. They released several internationally loved tracks, such as ‘It’s raining‘ and ‘Platonic Love‘. Their latest and fourth album ‘I Wanna?‘ was highly anticipated by fans and the title track ‘Back:Hug‘ did not disappoint. 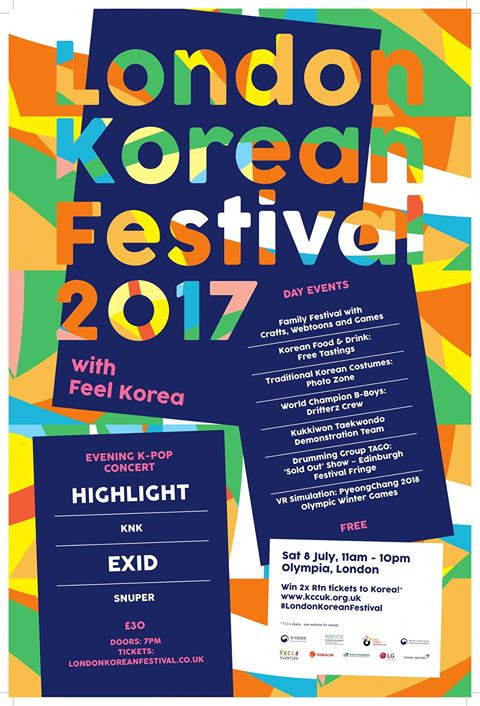 The line-up is very good and we believe you will enjoy the event with these k-pop groups to the fullest! The event will take place in Olympia London on Sat 8 July 2017. The event will start at 11AM with day events. You can taste Korean food and drinks for free, enjoy the photo zone with traditional Korean costumes, see performances by Taekwondo and drum masters or see the performance of World Champion B-Boys group Drifterz Crew. The door to the concert location will then open at 7PM. Admission to the day events is free and the tickets for the concert cost only £32.14 (including fees). You can buy tickets at EventBrite.

Get more information about this event on the Korean Culture Center or on the official Facebook event.