KIDOH ANNOUNCES OFFICIAL US JUNE TOUR WITH NEXTLEVEL AND TEAMBUNBUN

KIDOH ANNOUNCES OFFICIAL US JUNE TOUR WITH NEXTLEVEL AND TEAMBUNBUN 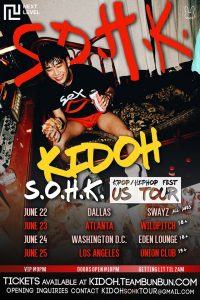 Former ToppDogg member Kidoh (Jin Hyo Sang), has just recently announced his upcoming tour with NEXTLEVEL. Kidoh had toured the US previously in December with his parent company ROCKBOTTOM, which also houses Supreme Boi (BTS producer), Type-C, Iron and i11evn, and will be touring once more this June. To recap over his last tour, you can check out his Dallas coverage to see more.

Kidoh‘s new EP album [S.O.H.K] (School of Hard Knocks) will feature four tracks consisting of multiple different genres including rock, hip-hop and punk. Kidoh will be using this album based on the hardships he has overcome and learned from. The tracks were composted and co-written by Kidoh and Simo, both  producing and directing every aspect of the album.

Each city will feature a variety of different artists to open for the tour as well as a DJ spinning the latest KPOP and Korean Hip-Hop tracks to keep the audience occupied between sets. The guest artists will be announced early June after ticket tiers have raised. Promoter company TeamBunBun ensures that the tour will consist of more than the Korean Pop genre so that all fans can feel welcome and enjoy their night.

Ticketing prices were released on May 15 and will continue to be accessible on Eventbrite and Ticketfly the rates are as follows: 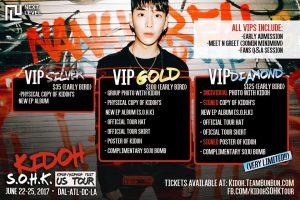 With Meet & Greet prices so low, fans are already surprised there isn’t a catch! You can keep up with your local cities tour updates via the following social media pages.