[Kmusic Rookies Week] A Few Reasons Mr.Mr is Worth Following

[Kmusic Rookies Week] A Few Reasons Mr.Mr is Worth Following

Let’s face it. Mr.Mr deserves a better recognition than the one they are receiving right now, and that was caused by global K-Pop group, Girls’ Generation and their comeback song titled “Mr.Mr.”

Especially for the Kmusic Rookies Week, we have prepared a list of reasons that explain why the group is worth following. And believe me – they definitelly are!

One of Mr.Mr’s strong points are its member’s singing skills, including high-pitch vocals that are enjoyable to listen to. The best proof is Mr.Mr’s song titled “I’m Waiting For You.” It just makes you want to listen to it over and over again.

Come on. Everyone knows that most man in the K-Pop industry have one complex – height. They wear insoles or they tiptoe throughout their performances (ouch!). Well, Mr.Mr’s member do not have this kind of problem. All of the members are above 180 cm, what makes them one of the tallest K-Pop group out there. The picture shows Mr.Mr with members of Tiny-G. 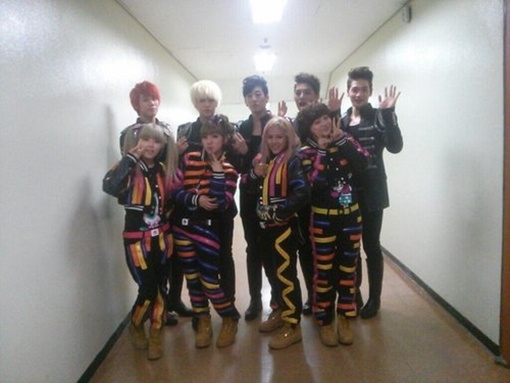 And by watchable I mean no need for closing your eyes in case something scary will pop up or, even worse, the whole mood will be ruined because of the overflowing aegyo. The only thing their music videos overflow with are amazing shots and angles. In case you need proof for that, check out their latest music video for “Do You Feel Me.”

Of course, you might say that every group has a very good choreography to at least one song, but there’s something about Mr.Mr’s dances that makes them stand out. The choreographies are just different from what you can see in other K-Pop videos. They are mature and catchy. If I were to compare them to other groups, I’d say they kind of remind me of Cross Gene‘s choreography or TVXQ‘s.

I don’t have to say much – just check out their debut performance. Great control over their breaths, strong vocals and surprising confidence.

Fans have been praising Mr.Mr for the lyrics for their song titled “Highway.” They liked the metaphors used in the song, as well as the feeling it gave.

There are definitely more reasons to like Mr.Mr and follow their whereabouts. If this article made you even slightly interested in the group, make sure to check out the members profiles here. And if you are already their fan, share your reasons to like them with us.