Jae and the Korea Joa team had the honor of attending a special cooking class at the Food & Culture Academy, an educational institution of Korean culinary culture. Established in 2002, the academy strives to globalize Korean food through development of sauces and standardization of recipes.

Their charming host and instructor for the cooking class Director of the Food & Culture Academy Kim Soo-jin. She graciously answered some questions from the media present. 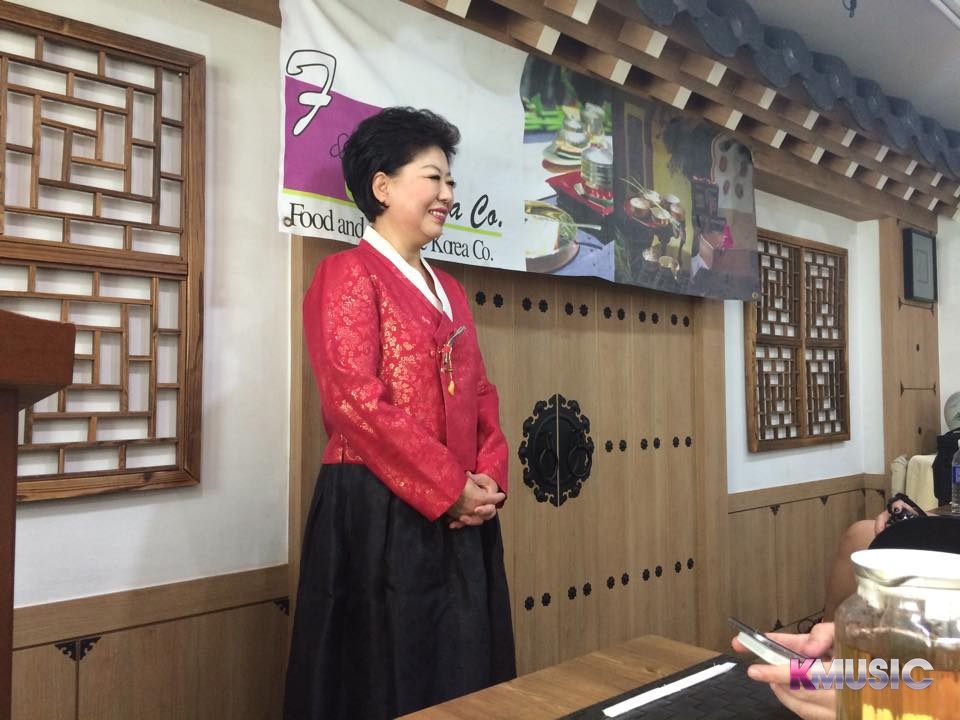 She was glad she had time from her busy schedule to meet the international media and conduct a cooking class with them.

of Korea. In the past this was a food only the King in the palace would eat it. During that time period the dish

was made up of thin sliced vegetables. It is only in the late period of Joseon did noodles get introduced into the dish

. Bulgogi is a unique dish

, the meat is sliced thin. Then soy sauce is put inside, so we can make a broth to eat with the dish

. In Korea Bulgogi is eaten with a soup. We eat rice with this dish

and sometimes add noodles to the broth.

Question: What is the big challenge with directing food and making it delicious in a film or drama?

Answer: Since it is a long process to film make drama after I cook and time passes the foods taste goes bad. I have more hardship because I have to constantly cook and constantly make the same dishes

Question: What is the most memorable moment of you career?

Answer: Like right now. When people come from around the world to take my class and learn how to make Korean food. That’s the most memorable. I am very proud whenever people are enjoying the Korean food. I see the possibilities of Korean food being promoted

all over the world. Thank you.

Question: What is a crazy fact that would surprise people about Korean food, whether it is some kind of ingredient used or some method?

Answer: It would have to be Kimchi. If you go back in history there are more than 200 types of kimchi. Kimchi is one of the 5 world super foods, that was nominated by the Washington Health Magazine. Kimchi has a lot of nutrition

, it has vitamin C and minerals. It’s a healthy food. Unlike other food the more it is stored, it doesn’t go bad, the nutrition goes up. The more it’s stored the healthier it is. Like we are addicted to cheese, once you get addicted to kimchi you can’t take it out. It’s also the for fermented good. Since it is a world renowned food scientifically, I try to promote kimchi all over the world. Today we will also give a small dish of kimchi. So ask me if you want more.

Question: What makes Korean food so unique, in the world view of food?

Answer: As you experienced, Korean food is not just one dish. We have rice and all the side dishes that complement the nutrition that rice doesn’t have. That’s the unique part of Korean food. Throughout the world, Korea is the only country where we have the rice and side dishes has all the nutrition for the plate. The rice itself, not only do we have white rice but we have over 200 types of each rice and grains. For an example grains, rice, also some kind of vegetable with green leaves and mix rice with that and so on. There are a lot of rice’s we can cook with that. There are so many side dishes, they are almost uncountable. There are so many side dishes in Korea. Side dishes include fishes

, meats, vegetables, and all sorts of stews that we have. Through eating all these foods the nutrition is spread through all these dishes. So we will get healthy if we eat Korean food. The attraction of Korean food is that Korean food is well-being food which makes everyone healthy by eating it.

The group is also treated to Miyeokguk, which is a Korean seaweed soup, that is eaten for its nutritional value but also made to celebrate a loved ones birthday. According

to Director Kim, eating Miyeokguk is good for clearing and thinning the blood and is given to women after they have given birth to recover quicker.

Question: Back to cinema and drama, Food is something that requires more than one sense. Sight, smell, taste, and touch on occasion. What is the challenge in presenting food in cinema and drama work where viewers can only see or sometimes hear what you are cooking?

Answer: In the past, the food in the cinema it was only by sight. Now a days it became more detail because we are trying deliver the sound when you’re chewing and the feeling after eating the delicious dish. So now we are using facial expressions to deliver the tastiness or the bad taste of the food. Depending on who eats it, the cooking method changes. So the difficulties were in the past, now it is possible to deliver all the five senses when filming the expressions and sound.

Question: I think a lot of us were admiring the wall outside with all the photos of celebrities enjoying the food. What has been your favorite project or actor to work with?

Answer: All actors are my favorite, because they are the star…so when the actors come in to practice cooking, I am happy because I can hold the hands of the stars. When I am teaching them how to cook, hold a knife I use that opportunity to touch them and become friends with them. After all I am a girl. I have a tendency of becoming friends with all the actors.

The group is admiring the picture

of many celebrities and dignitaries she has had the privilege to show how to cook a traditional Korean dish. 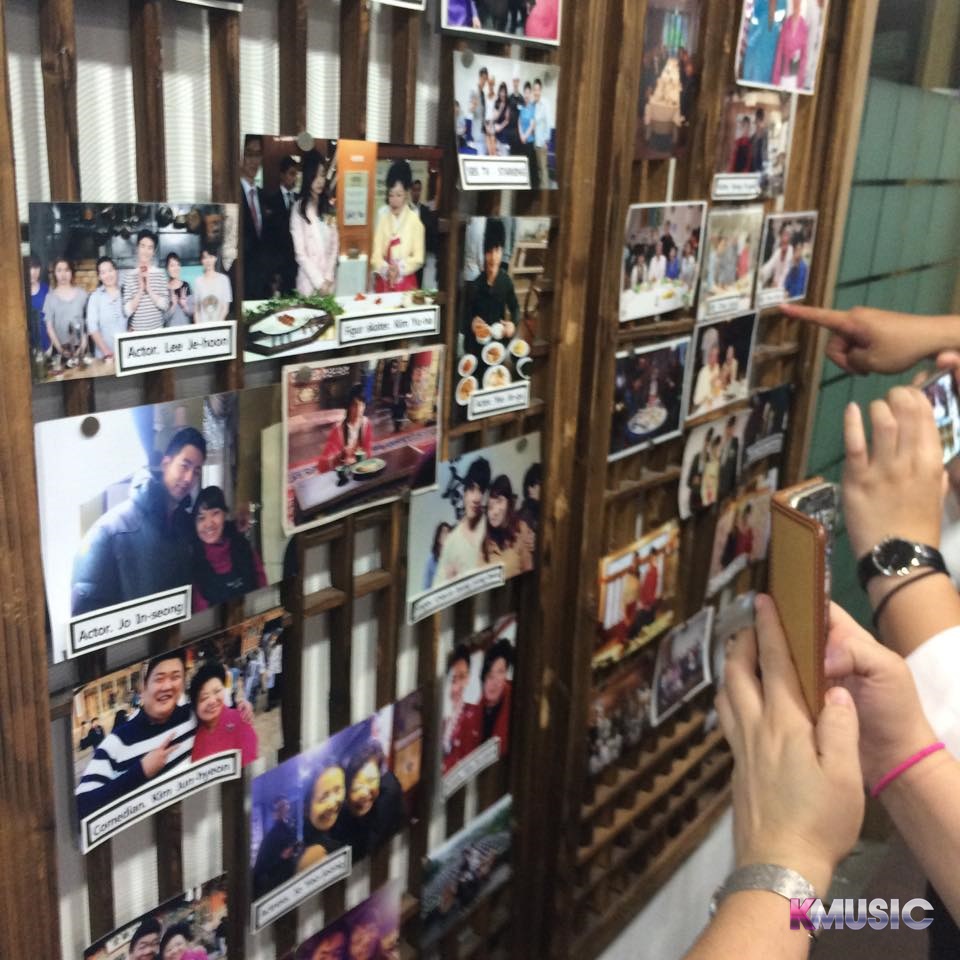 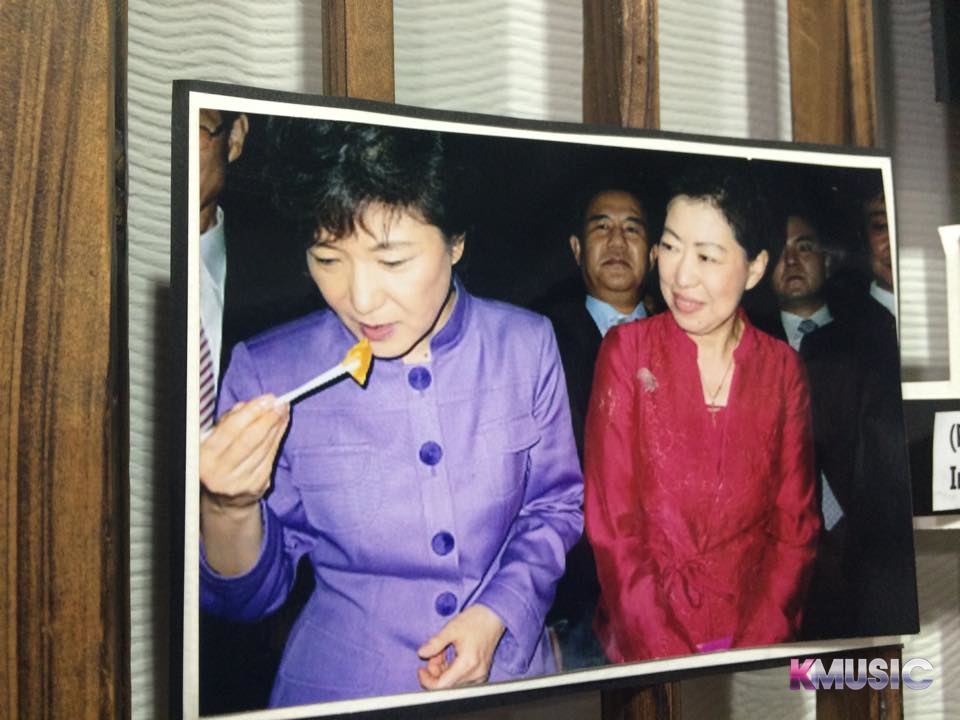 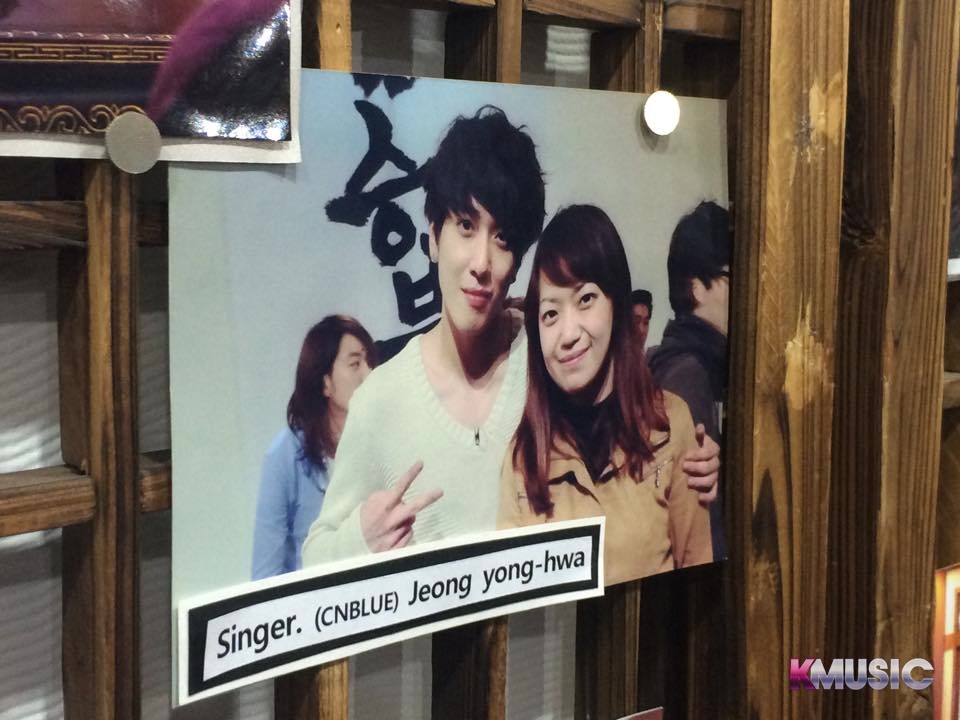 Here are the recipes for Japchae and Bulgogi, check out the videos for step by step instructions as well as more tips on making these and other Korean dishes. 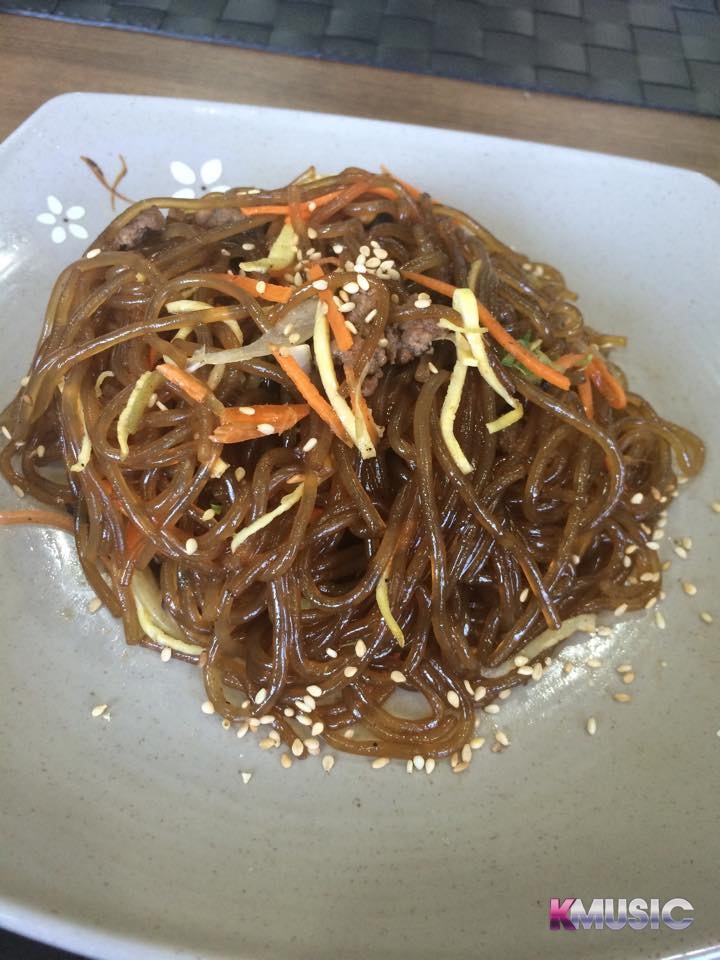 Recipe
1. Add salt to boiling water and cook the glass noodles for 2 minutes. Then, drain.
2. Separate the yolk from the white to make egg garnish. Cut into 5cm-long pieces.
3. Add 1ts salt to boiling water. Quickly cook spinach and rinse in cold water 2-3 times.
Squeeze out excess water.
4. Cut carrots into 5cm pieces and then finely chop. Stir-fry in pan, then cool.
5. Finely chop the pre-soaked Jew’s ear mushrooms and shiitake mushrooms. Stir-fry in pan and let it cool.
6. Cut beef into strips, season and stir-fry.
7. Boil the seasoning. Stir-fry the pre-cooked noodles in the seasoning and let it cool.
8. Mix all of the prepared ingredients.
9. Plate and top with yellow and white egg garnish. 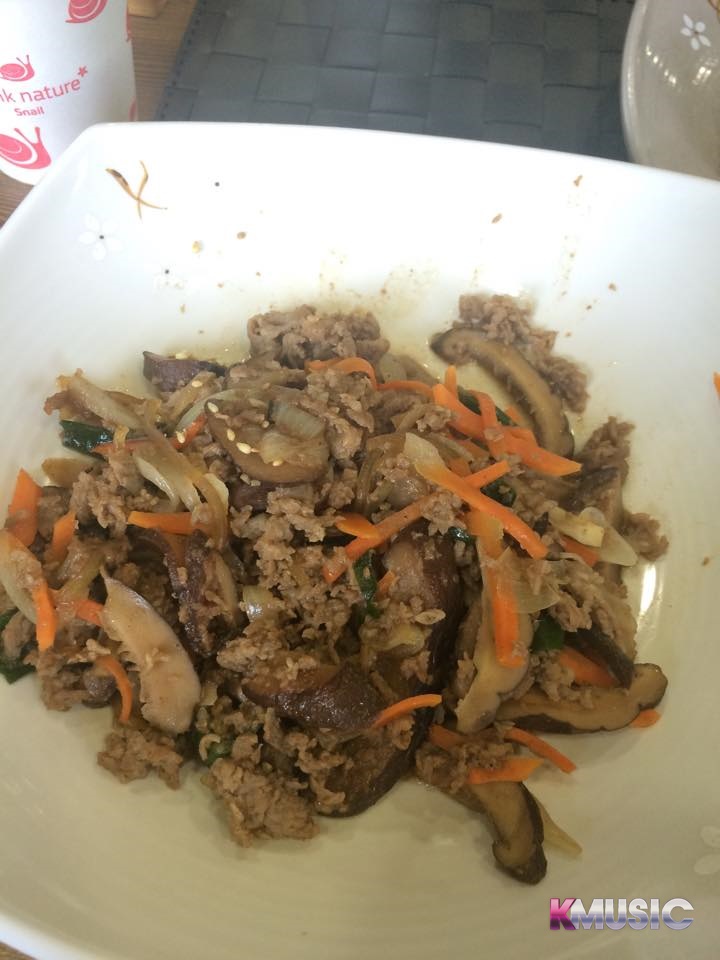 Check out Jae’s Vlog as he and the Korea Joa team attempt to make delicious Korean food. The team also had the opportunity to explore Korea’s famous Gyeongbokgung Palace, built in 1395 and is also referred to as the Northern Palace for its location in reference to the other palaces. The palace is part of the Joseon Dynasty and was founded by King Taejo (Yi Seong-gye). The Palace was named Gyeongbokgung Palace, the “Palace Greatly Blessed by Heaven.” With Mount Bugaksan to its rear and Mount Namsan in the foreground, the site of Gyeongbokgung Palace was at the heart of Seoul and deemed auspicious according to the traditional practice of geomancy. Gyeongbokgung Palace is also used as the historical backdrop of many historical dramas, such as the Moon Embracing The Sun.

The Korea Joa team explored the area of Insadong in the heart of the city. Looking at all the shops and the many goods and trinkets on sale.

The day ended with a trip to the at trip to Korea’s N Seoul Tower. Opened in 1980 to the general public, the tower sits atop the Namsan Mountain. The iconic location provides a panoramic view of Seoul. The N Seoul Tower also serves as a transmission antennas for KBS, MBC, SBS TV, and FM. PBC, TBS, CBS, BBS FM transmission antennas are also installed in the tower. The N Seoul Tower is also a featured location in many Kdramas as a romantic location where couples can put a lock to represent their love for each other.

Scroll for more
Tap
Oh No! Henry Bloomfield Gets to “Kiss a Kumiho” in His Recent Music Video!
WIDMAY’s SNUPER Is Ready To Debut!
Scroll
Loading Comments...