For this week’s  “Let Me KPop a Question”  segment, we want to discuss Korean celebrities’ controversial tweets while we ask: Should Korean stars refrain from posting their honest thoughts? If they decide to tweet, should they apologize later? Maybe, they should use SNS accounts to post pictures and cute messages only?

Last week, 2PM‘s Chansung was put in the spotlight for tweeting his honest thoughts about Korean society after it faced the tragic sinking of the Sewol ferry with over 400 people on board. The singer wrote, “Accidents can occur. But the way it is handled reflects our society. Through this one accident, we can learn what kind of environment we are in. It is also something that can happen to us and not just to strangers. I think society is diseased.” He later concluded, “I am deeply saddened and upset…My heart feels very bad after the accident. I feel like this because of the accident, and also because of the vicious deeds and unverified stories going around, hurting people already in pain. Those types of people [spreading the rumors]…I hope they hurt as much as the pain they have caused.”

His fellow member, Taecyeon (who is known for his honest and controversial tweets)  also expressed his anger toward society, writing, “People who are spreading lies and rumors right now are not even people.“

While their anger is understandable in the time of such a tragedy, and when everyone is expecting unity and kindness, are they being to harsh as public figures who’s words are seen by hundreds of thousands of people? Taecyeon previously had to apologize for tweets he made concerning  JYP Entertainment’s  choice to grant someone a promtion.  His tweets about JYP’s inside issue might have been a little bit too extreme but was he within his rights to share his point of view?

His first tweet said, “If you award a promotion to someone who did not even help or manage things, what does that make those who stayed by my side to help and manage?  Did you make a choice that can be understood?  Even I as a celebrity in the company do not understand this so would the fans of the company be understanding?  JYP needs a reformation in 2014.“

He then continued his thoughts in a second tweet, “The company needs to reform to become one in which people are not simply just timestamping the hours they worked, but actually become one that is worth while to work hard for. The entertainment company does not even entertain its employees, so how could it satisfy the public?  Whether or not the company is in the top three, it is time to not attach great importance to that title and ensure internal stability.“

Taecyeon concluded, saying, “If our company wants to aim to be the best once again in 2014, I think it might not be only in the power of the producers but also in the power of the company’s employees.  For the unappreciated JYP staffs who deserve the actual credit.” 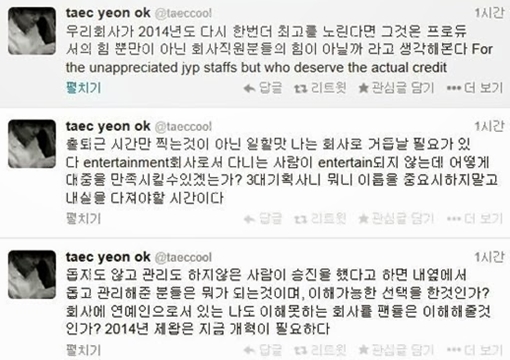 Ouch! That must have hurt JYP. No wonder he later issued an apology, “I think it was inappropriate for me to write a public post concerning my agency’s management. I hope that you understand that the post came from a lot of affection and passion for my agency JYP to be the best. I will become a Ok Taecyeon who works hard and communicates even better with my agency,” and deleted his previous posts.

Another controversial tweet, or should we say retweet, about the ferry accident, was posted by Yoon Jong Shin. His tweet read, “To give an example of how important the media is, don’t you think that the students, who were rescued during the initial stages of the ferry sinking, are eve more traumatized and bewildered from watching the media’s report of the images and footage relating to the rescue of their friends? Please be more cautious.”

Even though many might have agreed with Yoon Jong Shin, he later deleted the initial tweet, and explained, “There was a post that was retweeted, but I did not do it. It has been deleted. 42 minutes ago, I didn’t even touch my cell phone. Hmm… I felt careful and difficult about saying anything, so I was not able to follow tweets or even the news. By all means, I hope this was just my mistake.”

Now, as we talk about controversial tweets, it is probably IU‘s “accidental” post with a photo of her and Super Junior‘s Eunhyuk in it that comes to mind first. 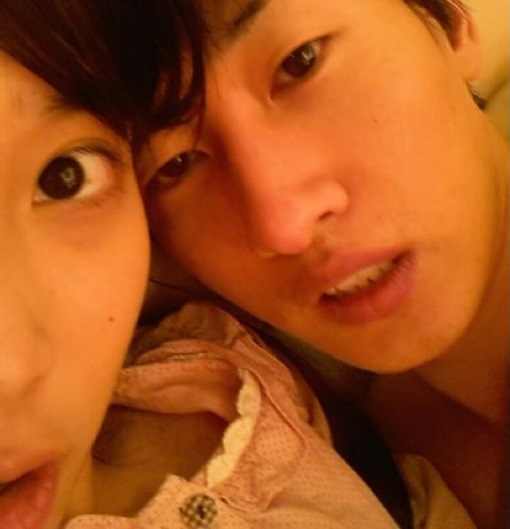 Her concerns were understandable, as her tweet made a lot of people angry. While some supported both of them, and their alleged relationship, many cursed her, and turned their backs on IU.

Another big controversy that began on Twitter, was the scandal revolving around T-ara. The group’s members posted some tweets that netizens assumed were directed towards fellow member Hwayoung, after their performance in Japan, during which Hwayoung performed her rap portion on stage seated in a chair due to her injury. 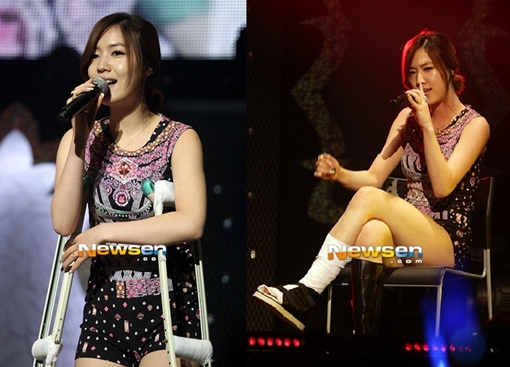 The first member to post messages, that was assumed to be teasing Hwayoung, was Hyomin, who wrote, “The differences in levels of determination^^, Let us all have more determination. Fighting!!!”

Member Jiyeon continued the tease, tweeting, “The differences in levels of determination ^^, Always be humble ^^ and sensible ^^ I applaud you, acting genius ^^” while Eunjung said, “A position can make or break a person, but determination can make a person too. Sigh, it’s unfortunate. You have to know to take care of the people around you.”

Hwayoung replied to those tweets, writing, “Sometimes, even determination alone is not enough. At times like these, I feel upset but I trust that it’s a blessing in disguise from the heavens. God, you know everything right?” 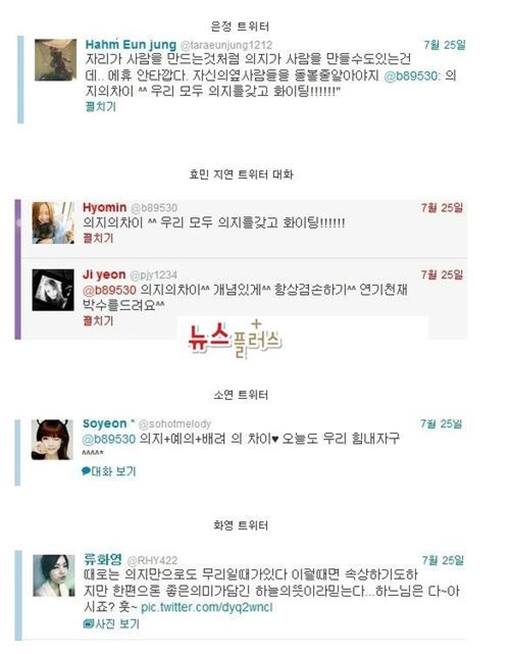 Even though T-ara and their agency denied all rumors saying that there was conflict and bullying among the girls, many fans started to express their dissatisfaction with the group in public, by burning their albums and leaving their fanclubs.

We have to remember that celebrities are only people, just as we are. They make mistakes, they have bad days from time to time. There are some things they like, and some that frustrates them. Does being in spotlight make them not able to share their honest thoughts? Do they really have to apologize for their opinions?

Let us know your thoughts about this matter in the comments below.

Scroll for more
Tap
Super Junior’s Heechul is the Next Celebrity to Have Over 1 Million Followers on Instagram
“Infinity Challenge” and “Running Man” Members Visit Memorial for Students of the Sewol Ferry Accident
Scroll
Loading Comments...