On December 25, MBLAQ‘s G.O posted on Twitter a photo and a short message, “I’ve got the ‘Everybody’s Game’ as well.”

The picture contained a screenshot of the results from “Everybody’s Game”, a popular mobile game. G.O became first place with 6,560,000 points, while DBSK‘s Yunho was in second place.

Netizens commented on the picture: “That’s awesome. He must have had played it a lot to get over 6,500,000 points,” “Yunho needs to practice harder,” “Fourth place is Lee Joon?”

In other news, G.O. recently released the single, “Because It Is Heaven” for the SBS drama “King of Dramas” OST. 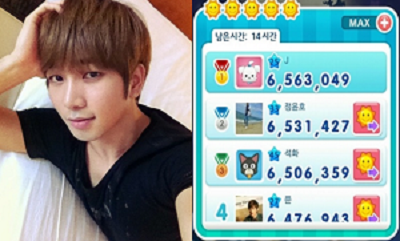 Scroll for more
Tap
Horan of Clazziquai is Getting Married this March
Best Selling Korean Artists in Japan for 2012: KARA and Girls’ Generation
Scroll
Loading Comments...