Even though we’re only 7 months into 2015, we can definitely say hands down that this year was all about the solo comebacks and debuts.

From Ga In‘s “Paradise” to Jonghyun‘s “Crazy“, the solo artists were rocking it hard for the first few months of the year. Right now, it’s all about the groups, but out of all the solo comebacks, one in particular made me really excited.

It’s probably not a surprise that I chose Infinite‘s Sungkyu as my favorite solo comeback, after all he is my ultimate bias, but I also chose him because he did extremely well with his second solo album “27“, even winning against two huge household names in the K-Pop industry which, surprised him just as much as it surprised us. 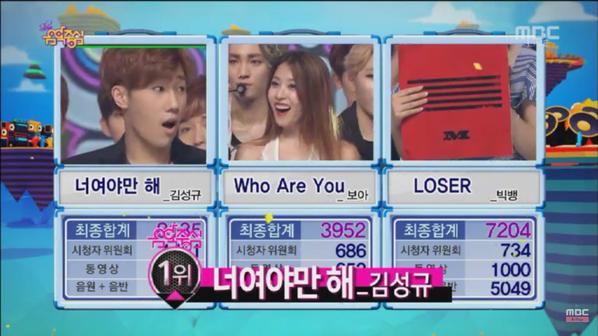 Ah, that expression says it all. Anyway, I’m here to recommend what songs by Kim Sungkyu himself you should listen to!

At the top of my list is what has to be my favorite K-Pop song of all-time; it’s “41 Days“, the last full track on Sungkyu’s first solo album “Another Me“. I’ve included the performance of it during Infinite’s “One Great Step Returns” concert.

Another non-title track I’ll suggest is “Daydream“, the 5th song on his most recent solo album. This song features the duo of Epik High‘s Tablo and Nell‘s Jongwan known as Borderline.

And since I love Hoya almost as much as Sungkyu, I’ve included the special performance version the pair sang during one of Sungkyu’s solo promotion stages.

The only title track on my list that I am going to recommend is “60 secs“. It was hard to just put one of the title tracks on this list, but I wanted to put this one on it because it was his first solo song. Plus, it was the era he had that glorious red hair so, yeah that made my decision a little easier.

This next song is also from his first solo album, it’s called “I Need You“. I really love the music video for this just as much as the song itself.

And I know this last one isn’t one of his songs, but I think this is an amazing cover of Nell’s “Time Walking Through Memories” and wanted to share it with you all. This video also includes a performance of “Kontrol” if you feel like watching that as well.

Honorable mentions include “Shine“, “Because“, “The Answer“, “Kontrol”, and many others, but I only wanted to include the five songs above. Get ready for the last “Morgan’s Choice” article coming up shortly!